Not known - Yes - No Buttons

Imagine a form with a list of items (facilities - toilets, showers, etc.) where for each of them user can select whether the item exists (Yes), doesn't exist (No) or it's not known whether it exists (Not known). What would be the best way to present this to the user?

I'm looking for a solution that is graphically pleasing, intuitive and user friendly. My initial idea was to simulate a three-position switch with labels above to indicate the selection. I will appreciate links to existing solutions or simply verbal ideas.

Based on your suggestions, I've decided for the following design. Thank you all for your answers.

Without knowing the use case, this is a little difficult to answer. For instance, what is the motivation of the user filling out this form? Are they doing it because they want to, or because they have to? Is it a survey, where you just want to see what people know, or is accuracy of paramount importance?

I would not not recommend a three-position switch, as the custom GUI element is likely to confuse the user (you'd be surprised how many people are still confused about the iOS UISwitch, even after 6 years on the market). Instead, I'd look to well-designed survey forms to inspire you here: one row per item, with three mutually exclusive radio buttons per line:

You could also use a similar layout, but use three segment buttons, instead:

Or, if the context is one of quick action, you could present each question individually. For instance, the Gas Buddy app has recently begun asking about other features of gas stations after a user reports prices, via a single-question popup overlay (with the question followed by individual buttons for 'Yes', 'No', and 'I Don't Know'.

You need to make a clear statement saying only one state can be selected for an item. Group of radio buttons or three state switch will do the trick.

A radio button or option button is a type of graphical user interface element that allows the user to choose only one of a predefined set of options. 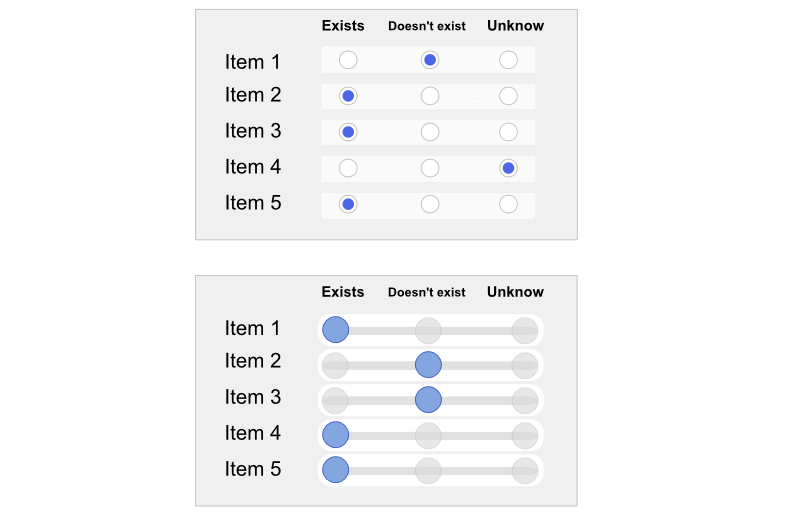 Agree with the radios-based answers above, except the controls themselves need to convey the meaning, so users don't have to keep in mind the titles of the columns. Similar to what Daniel has suggested, but maybe in a more graphic way. 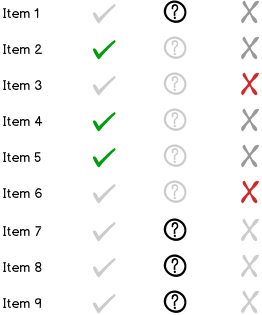 One possible options would be to use three lists: 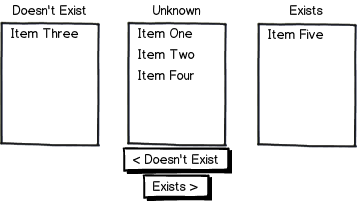 Although it would be necessary to explain to the user what they had to do.

Not the answer you're looking for? Browse other questions tagged forms buttons or ask your own question.

12
What is the best way to ask for a specific amount?
1
intuitive multiple directory (like file input) selection design (pic)
2
Improve form design for more efficient editing/browsing through data
6
How to design form that requires users to validate email or phone number?
8
UI button labeling in touch/mobile web and native apps
3
Toggle Switch with Delayed State Change
2
limiting filters with parameters
26
Form layout with fields which are sometimes input and sometimes output
1
How to make nested input groups more iniutive