Ever tried to sign your credit card receipt on a tablet? It takes a bit of getting used to, but since so many coffee shops etc... now use those apps, users are 'getting used to it'. However, what about smaller devices? Apps that let you sign on an iPhone? Are there any studies out there showing what the minimum space needed is? How do users handle signing something on a tiny screen where they can't rest their hand? Are there any comparisons between finger signing and pen signing apps?

Summary: There is no standard established, but a comparison of 4 apps with "signature" spaces (Square listed here in detail) has given an approximation of 93% as wide & 75% as tall as the area the user thinks is meant for their signature. This means up to 1300x480 and down to 880x320, using 1100x400 as midpoint standard based on iPhone5 sizes.

Note: This primarily concerns the "size" question, but touches on all questions asked.

An example is Square and their signature design. They have a huge signature area, along with a basic navigation, including a "clear" function. 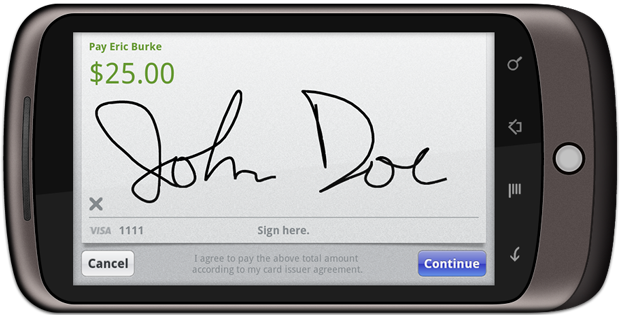 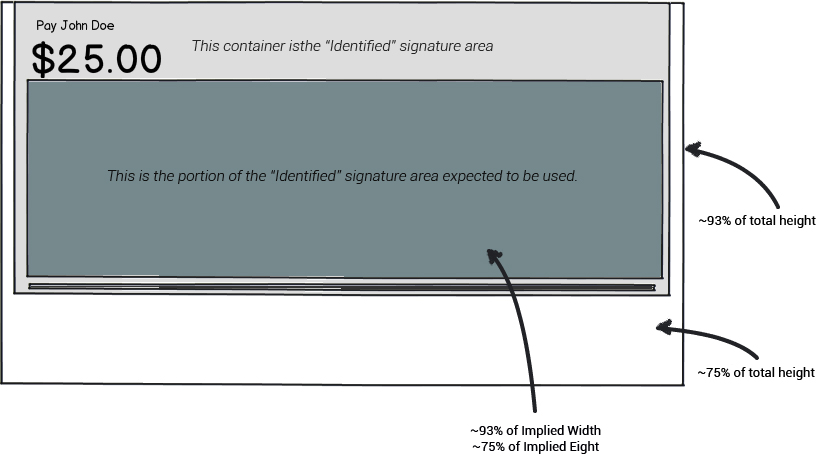 (n1) - Average 84% of total designated display area. Display area includes, in this case, the iPhone5's instructions and UI elements that give parameters to the signature area. As a visual example, on the above image, the signature does not extend above the line created under "$25.00" - and although it could've, the signature is "implied" to stay within certain boundaries. I've approximated this at an average of 84% the pixel space (93% of horizontal space, 75% of vertical space).

Edit: The arrow in the bottom-most picture points at whitespace and lists it as "75% of Vertical Space". Apply this to the "Identified" Container, not the whitespace.

Not the answer you're looking for? Browse other questions tagged mobile research mobile-application or ask your own question.

3
Are there turnkey services for simple usability testing of mobile apps, especially iOS?
4
Are there any studies on which keyboard keys get pressed the most?
16
Have usability studies been conducted on the use of alphanumeric characters as labels for controller buttons?
9
Are there any studies of users getting jaded of dialog requests?
4
Usability studies on navigation of mobile websites
0
Better Registration for Mobile Apps
4
How does changing method of requesting reviews for mobile apps affect the ratings?
1
Examples of mobile apps that have a sovereign posture
2
Are there any guiding principles for using the Gutter space in web products (websites, mobile sites, mobile apps)?