What would be the best actions to attach to an Android phone's buttons when I don't really need them?

I have developed an app that works on Android devices and iPhones. I went to great lengths to ensure that the interface is exactly the same on both systems.

However, one significant difference that I can not change is that most, maybe all, Android devices have, on the front of the device below the screen, two extra physical buttons along with a main button, whereas the iPhone only has one main button. One is a menu button, the other is a back button.

When using my app, whether on the iPhone or Android, pressing the main central button will exit to the desktop screen. This seems to be the default behaviour as I made no attempt to configure it, and that behaviour is fine with me.

Since I have taken care of all other interface needs in order to accomodate the iPhone's lack of any other buttons, the two extra buttons on the Android are not needed for me. However, I've discovered with testing that users expect at least something to happen. If nothing else, to at least in some way let them know that it's the case that the button was pressed but has no function, as opposed to not responding because of some kind of system error.

I have a settings and configuration screen, so the menu button could conceivably take a user to that.

However in my application, there is nowhere to conceptually go "back" to, rendering the back button completely superfluous. In some ways it might make sense to have it exit the user out of the application, but the main button already does that, so it seems a little odd to have that function duplicated.

I'm open to other suggestions as well if there are other possibilities I haven't touched on.

Having exactly the same interface on Android and iOS sounds somewhat dubious to me, considering that the those operating systems have different guidelines for navigation and GUI design. We would need some more datails about the interface of the app.

The menu button does not have to have an obligatory function and is more and more deprecated in modern devices. It can be left withou a function when there is no function for it. If you have a configuration screen, then don't point the button to it directly. Instead, let the menu button open a popup list, with a "Settings" entry. Like this: 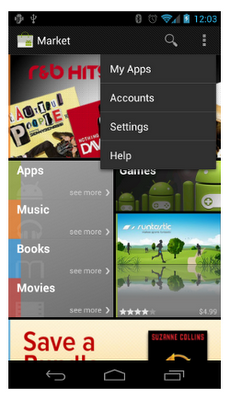 The behavior of the back button on the other hand is clearly defined in guidelines. It shouldn't do nothing and is an essential way of navigation within and between apps in the navigational structure of Android. Depending on the app's structure, it can take you a layer up in the app hierarchy, back to the last screen or back to to home screen. Aside from navigation, it can has other behavior as well:

For a better understand of navgiation in Android I recommend you the offical guidelines: http://developer.android.com/design/patterns/navigation.html

On Android devices Back button is very important and used very often by users.
Difference between Home vs Back buttons in your case will be that 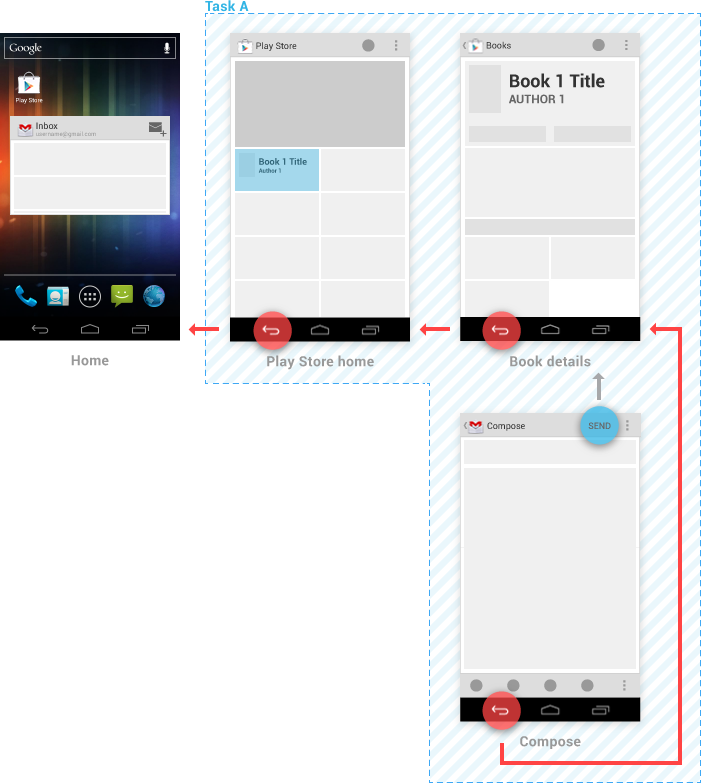 In some ways it might make sense to have it exit the user out of the application, but the main button already does that, so it seems a little odd to have that function duplicated.

So, as you see this behavior is not just dublicated, and if you just disable Back button that will more confuse your users than simply exit from the app.

Please notice that navigation UP button often takes similar result as BACK button, but theirs behavior is not dulicated too.

Most Android users are now used to the Back button. You could ask a confirmation "Do you want to exit?" if the back button is pressed. Then exit the app if the users accepts.

The menu button can be used to show an in app menu that you already have or to switch between screens. Many apps that I have used on an Android dont do anything when I press the menu button.

Not the answer you're looking for? Browse other questions tagged buttons android iphone or ask your own question.

4
Back button on iPhone
3
What is the optimal position for groupings of odd numbered buttons on a form?
8
What deliverables do I need to request from a visual designer for my Android app?
5
How would I indicate a required radio button to the user in Android?
2
What are best practices for the “complete using” android dialog?
3
Android: what are the best practices for up/back buttons?
2
On-Screen or Physical Buttons On Smartphones
7
What is the point of fullscreen keyboard on Android?
1
Determining app compatibility and iPhones?