This question is about a pop-out that is embedded on other web pages.

As space is limited, when you open the list from the bottom of the page, you quickly want to find out what's new.

That might be new messages posted to your team, but also a reply to a question you asked someone two days ago.

The default would be to order threads based on time of last reply. That would show the newest stuff first, but at the same time forces you to read all replies of all threads.

We know that replies are much less important than the initial messages. Except of course replies to your own messages, or replies added after you participated. It would be annoying to have a message sent to the entire organization, to be on top of the list for a few days, just because it has many eyeballs.

Would it make sense to order threads by last reply, but only if you participated in that thread?

So a reply to a thread you created two days ago, will bump the thread on top (for you).

But for another person, who did not reply in that thread, would see the reply counter going up, but the position in the list would stay the same for him. 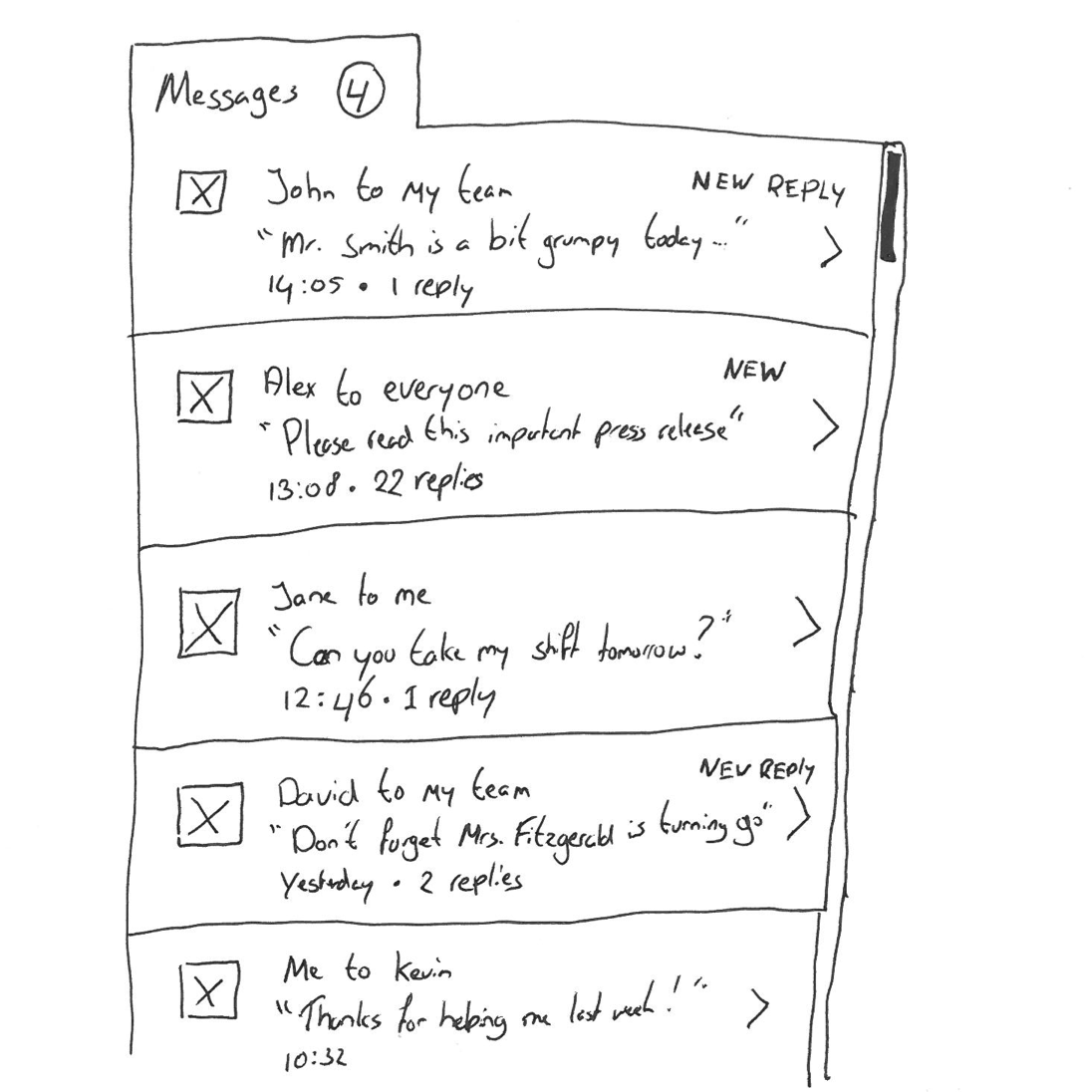 I learned the following from this:

Luckily we already have the concept of notifications. A notification is generated according to the following rules.

If we have the list of messages ordered by last thread on top. We could then show the list of notifications next to it.

So instead of a smart list, that uses above rules to order threads by last reply or first message. There are two lists.

To me, this actually looks way more complicated! 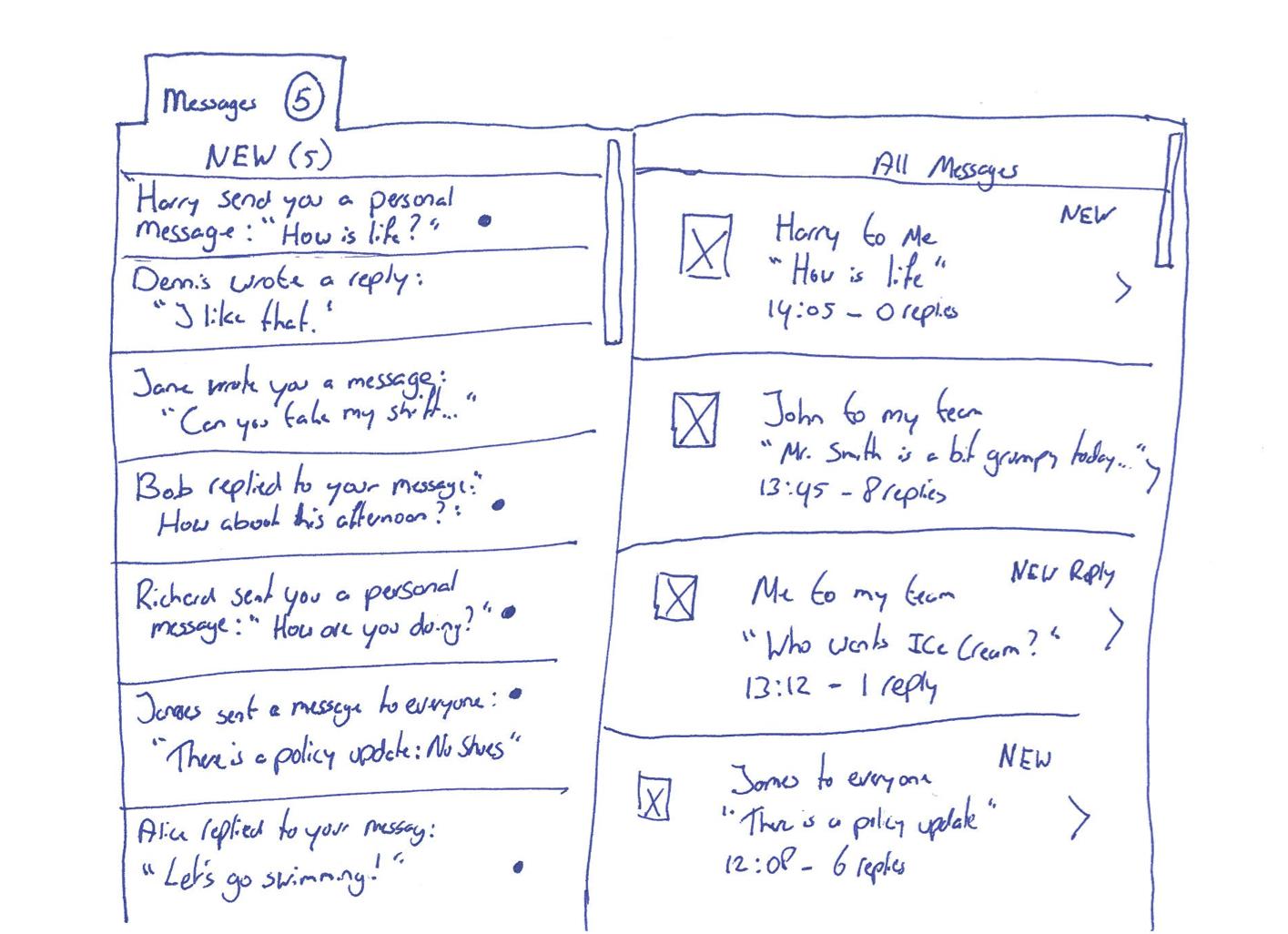 The flaw with modifying the message order in the way you describe is that it won't really be obvious to the user what's going on. In fact, they might just think that the sorting is broken.

I think the #1 things should be that the user feels in control. That means they understand what's going on. Having a lot of smart rules can be difficult for the user to understand.

For e.g. Facebook mini-feed applies a lot of logic to filter and not overwhelm you, but people don't understand that and are surprised to know a certain picture was posted by friend/family but it never showed in their feed.

With that in mind, I don't think that the software can perfectly predict what the user would be interested in seeing at any given point in time as that can change as well. In your example, there could be an urgent company wide communication that one might want to stay abreast of.

I think a better option might be to display messages in a reverse chronological list and have visual indicators to help identify the messages. For example the messages that the user is participating in could have an icon next to them. This allows the user to visually scan and find them more easily.

You could also add a filter, and mostly likely you would need to but it comes with it's own problems, so I would not treat that as a primary solution, but an additional layer on top.

Doing some research on how people identify what they want to track will help identify the visual indicators you need in place.

Earlier, someone already mentioned this kind of sorting might be confusing to the user. A solution would be to add some visual identifier (some kind of "favorite" symbol, I would imagine). However, this would still pose the problem of having many new threads that push down the newest reply to a thread your user was interested in.

Instead of mixing the sorting of your list, you can opt to keep the sorting basic and easy to understand (newest threads on top), and combine this with a "sticky" system where the threads that the user is interested in are kept on the very top of this list. This allows the user to quickly see "their" messages. And if they have time and/or are interested, they can continue reading down the list for the regular messages.

Even if you cannot passively track the (un)read status of new replies to these stickies, an active tracking system would benefit the usability greatly. Just let users "check off" any stickies they have seen. The sticky will move to the main list, uncluttering the view, and come back on top if there is a new reply later.

If necessary (but would make it slightly more complicated to use), you could allow users to opt-out of this sticky thread, or allow them to sticky other threads

Not the answer you're looking for? Browse other questions tagged lists ordering collaboration or ask your own question.

13
Making it clear which items in a long list are selected
4
Where to notify someone of an empty list?
10
How should email threads be ordered?
1
Is 'single click to select' list item wrong if its only used to show position?
1
Best practice for messaging system (microblog) using a “n-tier” model
0
Should you also order threads by their last edit?
37
How do I make a list NOT look scrollable?
3
Mobile UI for choosing without replacement a item from list b for every item in list and then choosing between two options
5
How do I list contacts?
5
In what order should chat messages be shown?