If guessing a display name, what kind of confirmation is needed?

In an iPhone app of mine, the user needs a display name, that appears for other users.

I found out that I can guess a user's display name. In the mockup below I have guessed that it should be "Sanna". This is possibly the first name of the user. But it can also be totally wrong, and in that case the user will probably want to change it.

The idea is only to avoid unnecessary setup steps. If the name guess is mostly right, then why ask every user for it? But the guess might be embarrassingly wrong in a few cases. I tried to find a more accurate way, but so far I am simply using the Device Name to extract the Display Name. Here is an SO question about it. Basically, if the Device Name is "Sanna's iPhone", it will extract "Sanna".

I do not want to force the user to pick a contact, log in to facebook or such things, just to get a name. I just want to have a name real quickly, and continue with the game.

Below I mocked four different ways to handle this:

EDIT: At this moment, I am using #4. Most users (95%) never mention it, which I think means it is working as intended. But I have received complaints about bad guesses, from users not liking the name I picked for them. They seem to be annoyed that they have to change it, even though that task is as easy as it would be confirming it in advance. So perhaps it is just seeing the bad guess that is annoying. If using a confirmation, like #2 or #3, perhaps the bad guess would be equally annoying. /EDIT

Is it a good idea to use a guess for a display name, or will it confuse the user? And if using a guess, then what kind of confirmation is needed? 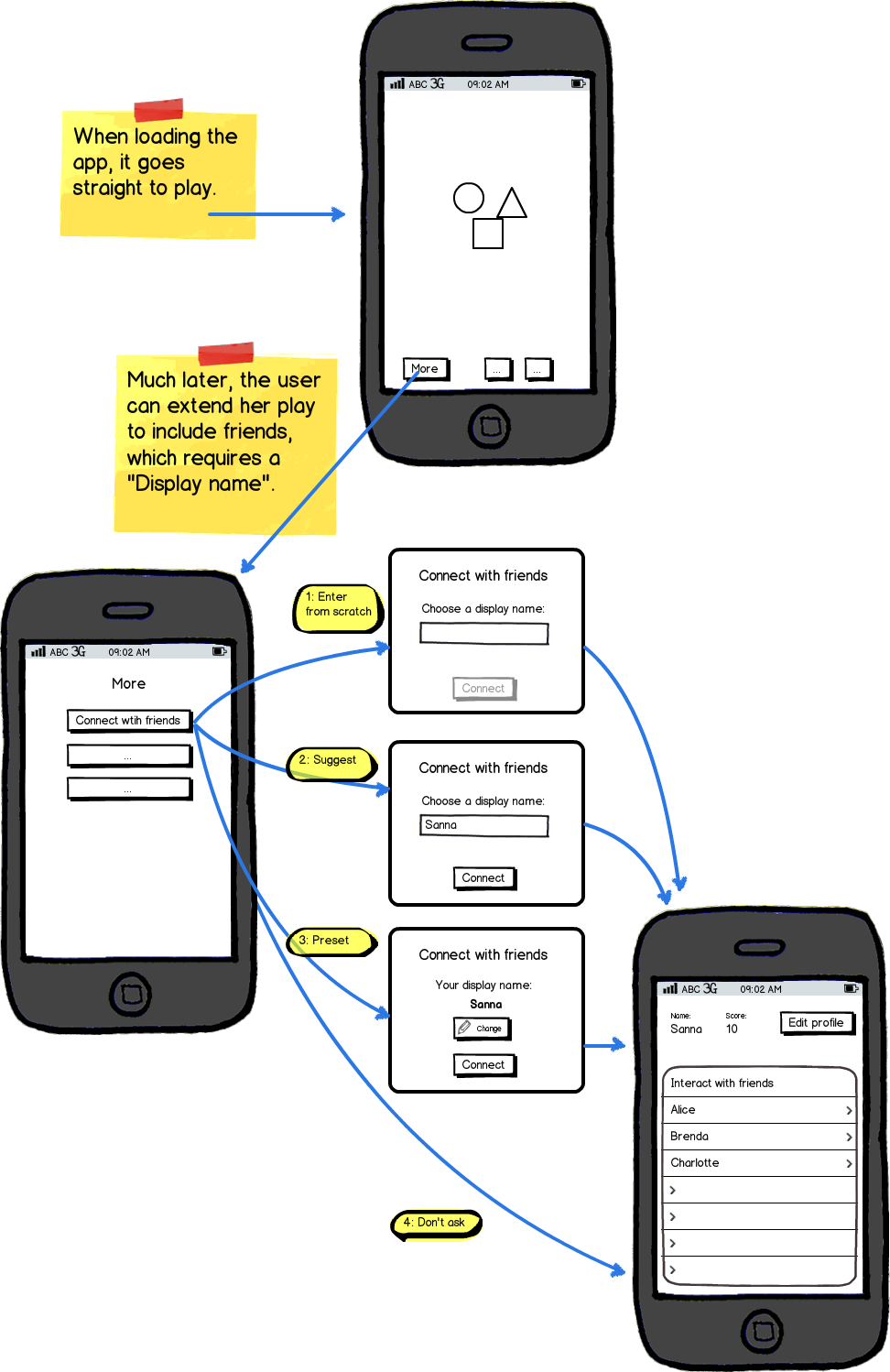 confirmation username mobile-application
Share
Improve this question
edited May 23, 2017 at 12:39

I like the idea of guessing a name because if you guess right, the user doesn't have to enter any text. If you pick a name for the user, you are left with two possible scenarios here:

Option #2 minimizes friction for both cases and is a very clean design with a single edit box and single button.

The real flaw with #4 is that the user may not notice that you've chosen a name that they don't like.

To have a quick display name you could also pick a name from the pool, which has the sence in your game world. For example, pick one randomly from the pool [Dragon, Knight, Golden Sword, ...].

As the name is given anyway (either by guessing or by picking), then options for choosing display name could be moved to edit profile screen, so you make connection more faster. The proposed state diagram is:

Now optional Edit profile is available on Connection screen, as shown in your sketch.

EDIT
It is important note of 95% users, which are satisfied with option #4. So you could try to combine #2 and #4 in a way, when name is displayed in input field: 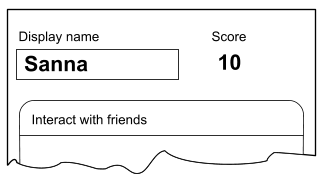 Option #2 is my preferred choice among them. But do you require the username to be unique?

Else, a list of unique name generated with option 2 name.

Not the answer you're looking for? Browse other questions tagged confirmation username mobile-application or ask your own question.

0
Displaying links to Privacy Policy and terms of Use on App
4
Handle Push Notification when app is in foreground
34
What cues can I use to nudge users away from setting extreme values on a slider?
1
Saving changes on Back key on Android 5 : how to deal with cases that need confirmation?
0
Is confirming an action using a second click on the same button a good idea?
1
Fullname vs username and how to ask for username after Social Login
1
My iPhone app requires sellers to verify their email address and phone number, when should I do that?
1
How to assign users unique and meaningful identifiers to child users while avoiding various pitfalls?
0
Should back button close the app or go deeper in it?