I have a UX problem involving an interaction that teaches the system how to parse a particular file name. (Note this is not the exact interaction and it does not deal with file names, but it does deal with parsing sets of data).

The idea is that the user will have a very very large set of file names (10,000) and each portion of the file name corresponds to something meaningful. The example I have in the wireframes is a filename for a photo.

Examples of file names are:

There may be different naming conventions as well. For example some may use 07_12_2012__YosemiteValley_001

But it is important to specify the hierarchy.

In my wireframes, the current way of doing it is to either, input an example and the system will parse out the different segments using delimiters and detects changes between text and numbers. 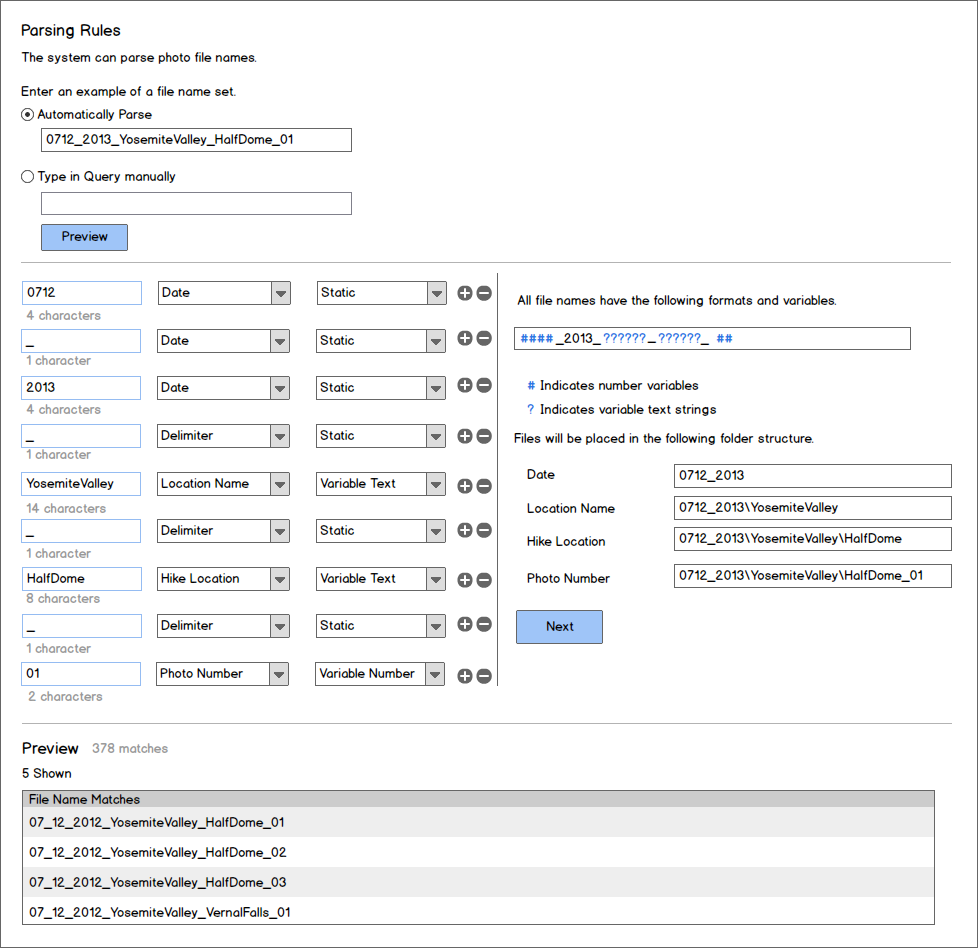 Once the user has clicked on preview, on the LEFT, they can see a breakdown of their file name and they can specify whether each segment is a date, delimiter, location name, hike location or photo number. On the right they can see their query being built and what the hierarchy will be for the sample file name.

Below is a preview of example files that match the parsing rules.

My question is, am I making this overly complex? Or is there a simpler way of doing this? My challenge is that file names will follow different formats, and sometimes there may be parts of file names that we want to ignore, so it becomes difficult to teach the system how to parse this data. The hierarchy types, such as date, location, hike location, are of course made up for this example, but the real scenario will include a fixed hierarchy.

What is everyone's thoughts about this? Is this too complex and how can I simply this?

Your task is to make some kind of String Parse Template Editor. I think that most appropriate way to do this task is to write some kind of formatted string. E.g. if you are using c# it'll be format for StringBuilder. This is just an illustration of the principle. Table editing of string is not so comfortable as editing it in line. As a minimum - make pivot of your table and start improving from this point. I think it will result in single text input but using your custom autocomplete functionality - suggesting user a choice from available options from the set which you implement.

Not the answer you're looking for? Browse other questions tagged forms interaction-design input wizard or ask your own question.

2
How can I make this complex photo upload system easy to use?
2
Folder picker: Some users want to preview contents of the folder but others find this confusing
4
Traditional file upload vs repository
0
On a Wizard, what's a good way to present a dozen different paths in a user-friendly manner?
3
Displaying Area of Residence intelligently
2
complicated inventory question with groups of fields based on quantity
1
pattern for multiple doc upload
2
How to handle a user text input which accepts tabs as a valid character?
1
How to consolidate multiple versions of a download page into one?