I have a map with a store and it's clients: 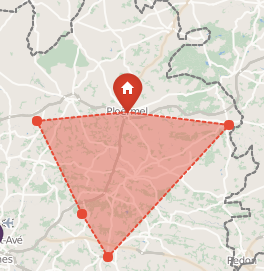 I want to give the user the possibility to remove/add the clients (it can be messy with many stores/clients). So i chose to add/remove on click.

Unfortunately, I already have an event on click: a popup. So if you click to have the info in the popup, the clients disappear: 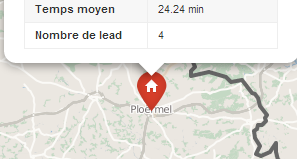 So I had two ideas:

Any advice or idea?

There's one possibility not considered in the other answers:

So you could switch between the different possibilities with your onClick event handlers. The main event handler would initiate the stack of actions and show the first and most obvious action. Then loop through them. When you're at the end of your stack, just show the map again.

If there're actions that are for power users only, you could set an onMouseDown action as well that counts the timeout until onMouseUp and then shows for example options. Tap+Hold is already in use on Google Maps for example for panning and such, so it's not really a new concept and power users will get to it quite quickly.

You can just implement a mode for adding/removing client which is activated with command button (menu item).

Generally speaking, make the most frequently action default and add mode for less frequently action. Command button not only changes mode but makes them obvious and also informs user of the functionality.

There are a number of possibilities:

All can be implemented in Google Maps with more or less work, and presumably in other mapping products too.

Why don't you add a button ON the pop up? Makes sense to add the information, as well as the functionality together.

Not the answer you're looking for? Browse other questions tagged website-design popup map-ui map or ask your own question.

1
Map functionality when using a designed map with Google Maps
10
For a web-app, how to differentiate "cluster" marker icons from normal icons on a map?
7
Re-plotting items on a map
12
Dropdown vs map
1
Designing a marker pin for google map
6
Multiple map markers on one location
5
Popover vs Modal to display a map
5
What is the best way to point the user somewhere offscreen in a draggable map?
2
Is showing one ad per day still annoying?