How to stop people becoming marooned on a causeway

This question is based on a real world scenario…

There is a causeway, roughly 1/4 of a mile long, over which the tide rapidly rises twice a day, rendering the tourist hot spot at the wrong end of it cut off from the rest of the country for several hours at a time.

Every year there are numerous incidents of cars caught out, in the middle of the causeway, occupants on the roof, awaiting expensive rescue.

There are warning signs, but as we know warning signs are often not heeded and anyway, these signs simply say 'check the times' and barriers would not work as there is plenty of flat sand around the causeway

There is also a problem with people running late, who know the time but can't afford to be stuck for hours waiting for the causeway to become passable again

The question is this:

The cheapest option is a simple sign, but that needs to get the message across.

Flashing lights help as they are a standard "Do not pass" symbol, and they can be turned on automatically. Include a fairly substantial charge for the lifeboat recovery (which is arguably the real deterrent!)

Here's a mockup which might appear in the UK: 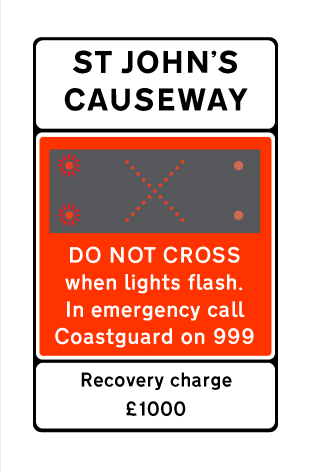 Lowering the end-points of the causeway so they get physically blocked first could be an option.

They could be so deep that they are already underwater when the time needed to cross the causeway is longer than the time left the tide requires to flood the whole thing.

My guess is that with only static signs, people distrust the information and use their own judgment. Which is wrong.

Suggestion: an electronic sign, with a read out like "Safe time remaining to use causeway: 5:32". Or: "Tide rising. DO NOT CROSS. You will be stranded". Since the information is more specific, it seems more trustworthy.

I know a few such causeways, I think many “easy” solutions are available, starting with turning them into bridges or ferry services. You stipulate that a barrier would not work but I am not so sure. If something that looks like a barrier with a danger sign is closed, would many people drive on sand (itself possibly hazardous for the vehicle) to get around it? If that's the case, you could always cordon off the sand with or add a blinking traffic light or “tide coming” sign to make it look more pressing.

None of this is out of the reach of modern civil engineering, here are some pretty impressive examples). The problem is not so much inventing potential solutions as finding the right cost-benefit trade-off (including building costs of course but also ecological/landscape consequences). I would guess the causeway is still there mostly because it's relatively cheap, adds some cachet to the place and allows the water to flow further inland and protect the tidal ecosystem.

One thing you did not specify is whether the people getting stuck are visitors, locals or both. This little piece of user research could give some cue to the exact nature of the problem and potential solutions (e.g. informing of the danger in general, focusing on enforcing the rule or providing more precise information to support the decision to get on the causeway).

By the time the tourists are approaching the causeway to return back to the mainland, it'll be difficult to change their behaviour - they have a very strong motivation to ignore the warning signs and try and cross anyway, not wanting to be stuck until the next tide. So a more effective UI might aim at making sure the tourists know the time before they start the drive home. Possibilities:

For locals who know the tide times but are tempted to risk it anyway, other measures will be needed on the return road.

No one method would work. But a couple of methods, could be. - Text this number and we will send you a text when you should leave. - Fine of 50 (whatevers) for a local charity if we have to save you.

Raise it to a level above high tide?

Stop rescuing vehicles. The rest will learn. And a few abandoned flooded-out cars would be an effective deterrent.

On a serious note, automatic barriers should work - put up fences (or traffic bollards if pedestrians should still be allowed to enter the area) to the sides of the barriers, for say a couple of yards, to deter people from driving around the barrier.

If visual cues and even a barrier is not working, I would suggest a slightly higher-tech solution: to use a water level indicator that sets off a really loud alarm when the water levels rise to certain heights(when the causeway should be deserted). A series of red, alarming lights along the railing of the causeway would definitely help convey the message.

Due to these alarming signs, when the unaware visitors' attention is turned to the notion that something could be wrong, easily readable signs describing the danger should be available on site, to answer their doubts.

Lots of great ideas already. Some information that could be added to the signs include:

On a lighter note: have a retractable ramp that raise up, so they can jump across Dukes of Hazzard style :)

Lay tire spikes down during the prohibited hours, if they try to go ahead they get stuck BEFORE the causeway. When the causeway is open roll them back up.

During this time a ferry or boat could be available to those who can't afford to wait.

26
How to stop car lights being left on
2
public transit bus stop and door buttons
41
How do blind people know where to find Braille signs?
23
How can I get people not to put trash in recycling bins?
4
How do blind people cook?
3
People using wrong door to building
23
How to encourage people to move to the back of the bus?
11
Metro station stop design to prevent people from commiting suicide