Below is a "Who Wants to be a Millionaire" type game show parody used as a practice quiz at the end of an online course, before the student takes their final exam. 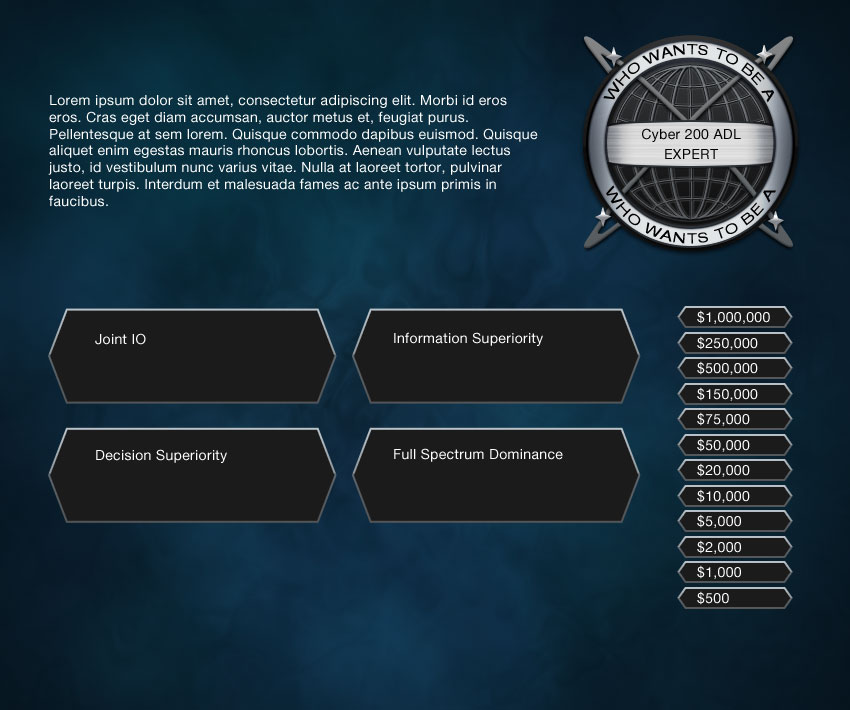 While it's obvious that this is supposed to be a parody of a game show, the title is "Who Wants to be a dynamically generated course title Expert?", not "Who Wants to Win Tons of Money" or whatever.

Since it's about being an expert, should I leave the "$" symbols in, or remove them and simply have a score between 0 and 1,000,000? I thought nothing of this at first, but now that I've realized the premise changes a bit with the titles, I've been second guessing whether or not the cash symbol affects the UX.

Weighing up the options myself, I figured:

That said, I think the redundancy of your logo might be of greater consequence. I would take out the second "Who wants to be a" and make the "Cyber 200 ADL Expert" text larger.

There's an article by Vohs, Mead and Goode (2006) called Merely Activating the Concept of Money Changes Personal and Interpersonal Behavior. The title tells the whole story, really. Putting the idea of money in people's heads, without necessarily giving them any, changes their social behavior. Specifically, it makes them less social, and more likely to work hard.

Extrapolating from that, I'd say that within your game, playing for pretend money will cause people to try harder than playing for experience points. It seems silly, since the user (hopefully) knows that they're not getting any real money, but the conceit of the game show allows them to work a little harder.

So I'd say stick with the dollar signs, and follow through with it. Tell them how much they've won. You can even let them keep a fake account so that every test lets them build their fortune.

Not the answer you're looking for? Browse other questions tagged games symbols learning gamification or ask your own question.

6
Are these religious icons clear enough without supplementary labels?
5
What guidelines are there for programmers wanting to learn UI skills?
1
Are there (nearly) universal symbols for SAME and DIFFERENT?
11
What symbols should be used for YES and NO when the user can't read?
6
What is a standard symbols for “more info” or “expand to show more”?
6
Tagging symbols (eg. @, #) What are the others?
3
Are mathematical symbols easier to understand than text?