Why do coins in some countries not display their denomination? [closed]

Coins have two levels of interfaces: a physical interface (their size, shape and weight) -- usable by vending machines and to certain extent by people with long-established habits of using these coins; and a visual interface -- used by people with less experience at coin-handling, such as tourists and just regular folks who don't use coins too often.

Now, the physical interface is "set in stone", and usually less important. Of course, it would be nice if coin's size was proportional to its value, but that's not always the case due to historical reasons. And changing current standards of sizes/weights of coins is extremely costly due to existing infrastructure of coin-operated machines.

The visual interface is completely another story. The single most important thing each coin must show is its denomination. Not pretty pictures. Nor ugly pictures. Nor head-shots of some random celebrities. Nor other nonsense.

Here's what I would consider a usable design:

Chinese coins aren't perfect, but still usable -- if I ever go to China, I could still count my change without knowing a single Chinese character:

Well, and here's what we are stuck with in US:

If you don't know English, you're screwed (even though a considerable part of population is actually Spanish-speaking). If you do know English, but never used these coins before, then it'll just take forever to count anything. If you are an American, and you used these coins your entire life and think they are perfectly fine — then see which of these two arithmetic problems you can solve faster:

What I don't understand is WHY. Why there are no attempts to improve coins design. It's not like the QWERTY keyboard or miles/Fahrenheits issue, where users habits outweigh any possible usability gains. I don't believe that changing the eagle to "25" on a quarter would suddenly create nation-wide confusion...

The U.S. Mint is responsible for designing coins and bills, so I contacted them for an answer. No answer yet, but I'll keep you guys posted. :-)

I understand the inherent desire to make things more clear, but there are things about the U.S. currency that makes it less necessary to have numerals imprinted on them compared to other countries' currencies:

This means, tourists don't use coins in the U.S. as much as they would in other countries. Instead, they would rely more on $1+ which are paper bills with numbers clearly printed on them.

Considering that all coins (except dime) were redesigned in the past few years, the U.S. Mint had plenty of opportunities to put numerals on them if they felt that there was serious usage problems among tourists or the U.S. population that impede commerce. But let's see if we hear from the Mint. :-)

So in short, while it would be nice to have numerals on the U.S. coins, it doesn't pose anywhere near the same amount of usability problems or risk as other currencies.

Posting Yen and Pound for reference. Oh, the joy of Pound coins... and you thought the dollar coins were bad. ;-) 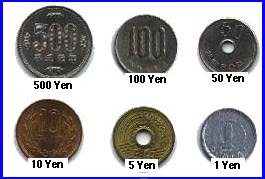 As far as the Royal Mint is concerned, they are reported as saying (with my emphasis)...

It's the only work of art that every member of the general public touches every day, that is important to the nation's way of life.

We had to make sure that the coin design was true to the heritage of British coins and gave fresh inspiration and modernity to something that has been in existence for 40 years.

So it's down to design. The space around the engraved image is used for the value, and lettering works best. A digit would either have to be tiny or intrude into the engraved design. [The 5p piece in the centre of the set is slightly different, but the words run along the horizontal line. A digit 5 wouldn't really fit anywhere.] 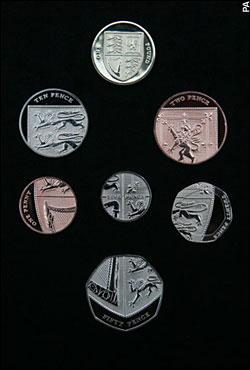 However, figures only appeared regularly on British coins from decimalisation anyway. Prior to 1967 (when the first 5p and 10p coins were minted, replacing the shilling and two-shilling pieces), words were used:

You have to go back quite some way to find a digit on a coin, and at that stage all coins were circular and of a similar size.

The user experience is tailored to those who are using the device [a coin in this case] most often. UX is not a primary concern of what is stamped on the faces of a coin. In the UK, each coin is recognisable by colour, size and edge milling, and for those who are handling them day in, day out, no other identification is actually necessary. Of course, as noted in the question here, that's not ideal for those who are unfamiliar with it.

Afterthought: It's probably worth adding that in 1967–71, when the entire coinage system was changed with decimalisation, all users of the coinage were unfamiliar with the new coins, so easy identification was vital for everyone. Numbers were included in the new decimal designs. After forty years, they are no longer as necessary.

Not the answer you're looking for? Browse other questions tagged physical numbers or ask your own question.

23
Why do light switches find themselves OUTSIDE the room they light up in some European countries?
3
number justification in HTML table cells where some cells are editable and some are not?
1
Why is the groundfloor G on some lifts, and 1 on others?
2
How to display negative numbers which are not currency?
13
Why are stairs not replaced by ramps?
76
Why is sugar not in a shaker?
5
Why do some elevators have a single call button and others two?