I noticed that Gmail's conversation interface has a bent arrow icon for back-to-inbox and a very similar button for reply.

Below is an image of the interface with the two buttons highlighted in green. Isn't this generally considered a design flaw? I would think similar icons with very different meanings, especially on the same page, would be an obvious no-no.

Does anyone have any insights, such as principles that would back up Google's design decisions?

This can happen to a product that goes through a long and gradual evolution, where the changes may seem subtle, and subsequently are not properly vetted out.

If you look at the old Gmail's icons, there was much better distinction between Back and Reply buttons. 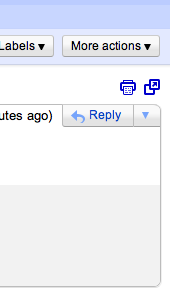 As you can see, the distinction between the Back and Reply button was clear.

Things were even more clear in 2009, when they actually spelled out "Back to Inbox". 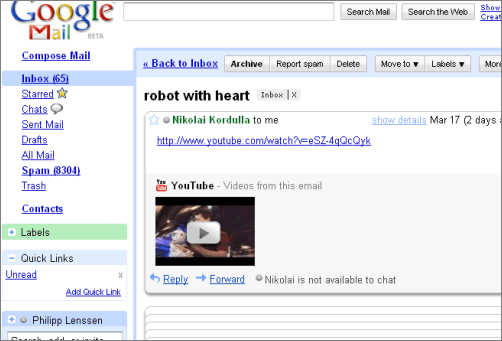 Anytime there is any change, however benign it may seem, we should take a few steps back, and re-assess. Because a series of benign changes can add up to a major problem down the road. And that's exactly what happened in later 2011 when Gmail completely eliminated text-based labels for all their buttons and used only icons. The changes were net well received.

I've personally worked on several applications that gradually evolved over 10 years, and have witnessed the same type of problem. In a large organization, it is extremely difficult to have a process in place that ensures periodic re-assessment, because it is hard to justify the cost due to the fact that the process itself doesn't yield direct financial benefits. And the process can also be rife with politics.

'Very Similar' is subjective. The arrow styles are different, even they point the same general direction. Google probably felt that the icons were different enough, and in different contexts on the page so that most users wouldn't get confused.

In a sense, they are very similar actions as well. The back button at the top leads you back to the list of e-mails in your inbox. It’s also clearly outside of the context of the current e-mail through white spacing and a horizontal rule moving across the entire viewport.

The reply button may look similar (not equal), but it is within the context of the current e-mail. It’s inline and the meaning of the button is also back to in the sense of reply back to the sender. Having the arrow in an e-mail going the other direction (to the right) means forward. Again standard since the beginning of time (i e January 1st 1970). For reference, take a look at Original design choice of back and forward directions?

This is not an error, or false implementation breaking user experience guidelines. But I can agree to that it’s a bit unclear in the standard setup of GMail theme. Looking at my GMail theme – this is not a problem:

Not the answer you're looking for? Browse other questions tagged buttons interface or ask your own question.

6
Is it worth using '>>' or similar marks on buttons?
1
Actions through buttons and alternative ideas
15
What's the Best Placement for Save/Cancel Buttons on Very Long Forms?
0
Conceptually similar but actionably different choices in a modal
3
Is it ok to have two buttons with similar functionality?
4
How to display actions similar to one another for proper UX
0
Choose between single or double buttons for two actions
1
Enable/disable buttons for state change actions
1
Repeat or not repeat actions buttons?