Why is 1366x768 considered by some to be the standard widescreen for modern laptops?

Presumably, the 13" MacBook Pro is a popular laptop.

The reason I am asking the question is because I saw someone on ux.stackexchange.com mentioning 1366x768 as the standard widescreen for modern laptops.

Is it possible that they were referring to PC laptops which are a larger percentage of the laptop market?

These panels can be found in sub $500-$600 laptops, which accounts for majority of laptop sale. Hence 1366x768 being the most common screen resolution. (yes, even most of 11" macbook air panels are supplied by AUO)

Other than high-resolution and high-priced panels, lower-to-mid tier panels are dominated by AUO.

This is AUO notebook panel line. note the prevalence of 1366x768

AUO is the third largest lcd panel makers after samsung and LG, but the latter two are absent from inexpensive laptop display market, as seen by the first link.

This report was generated 05/31/2013 based on the last 15,000 page views to each website tracked by W3Counter. W3Counter's sample currently includes 66,635 websites. The browser market share graph includes data from all versions of the named browser families, not only the top 10 as listed below. 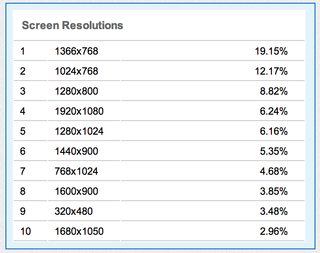 Macs are quite costly and their market penetration in the developing countries is quite low (growing, but still low). The cheap laptops which are mainly using Windows are the ones with the largest market share.

It is the same thing as Android vs. iOS. Apple just makes 1 version, whereas Android has hundreds of versions from different manufacturers.

A commonly used 4:3 resolution of LCD screens was 1024x768 before "widescreen" became common. Once the 16:10 and 16:9 displays became more "mainstream," extending existing production tooling to 1366x768 was the least expensive way to spec HD (720p) widescreen productions and keep costs down. The other common 4:3 resolution, 1280x1024, didn't quite make it to 1080p by stretching the existing production. So, basically, the cheapest way for a fabrication to switch to "HD" was to migrate their 1024x768 production to 1366x768. Everything else required retooling and thus be more expensive.

I hear the economics, and the history. But how about the mathematical reason for 1366 x 768?

Now will somebody answer what is the system doing with these 512 extra pixels?

The resolution that supports all the features of Windows 8, including multitasking with snap, is 1366x768. We chose this resolution as it has enough horizontal pixels to fit the 320px width of a snapped app, next to a main app with a 1024px width.

From Scaling to different screens

Not the answer you're looking for? Browse other questions tagged website-design design-patterns screen-resolution or ask your own question.

1
What is the standard convention for ordering On/Off buttons?
6
When did 1024x768 become the standard desktop screen resolution?
12
Why is 13px Arial font the web standard?
8
Screen sizes, how do we determine standards and what are they?
4
Why provide multiple resolutions for Android?
2
Is it bad ux if images on a web page are 'longer' than user's screen size?
0
Why is 960px the max width for a webpage on a 1920 width tablet?
0
When designing for desktop, is it still appropriate to design for standard pixel density?
3
What is the standard design pattern for file sharing?
71
Why is it standard for a website logo to navigate to the home page?