Why is the navigation below the brand strip at the top in the new Twitter & Vine app?

I am curious to know the science behind the new kind of navigation I've been seeing lately, mostly with bigger screen phone where there is a lot of space to utilise and sometimes it's uneasy for the user to interact with the elements without using both hands, specially on the dead top or dead bottom.

Twitter, Vine are the two of many that follow this new convention. Is this ergonomically the appropriate way of interaction?

Does it make the interaction easier as now thumb's arc covers the navigation much more easily as opposed to the navigation on bottom where your thumb is cramped slightly? I'm I right or there is something more to it? 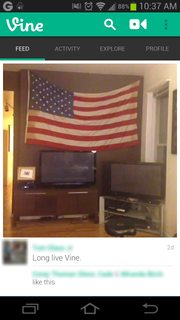 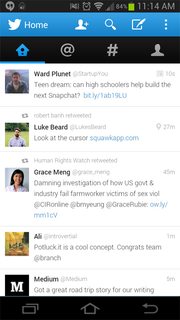 Your question is "why" in the general, what-is-the-ux-motivation-for-this-pattern type of question. In reality, for these apps and a majority of them, they are built this way because these are the patterns provided by the toolkit and commonly found in other apps. The developer is likely aiming for consistency with the ecosystem and not necessarily looking specifically at the UX implications of it.

Now, it may be worthwhile to have a discussion with Matias Duarte et al about the UX implications of this "standard" pattern. But, I doubt he or others are reading this thread.

Since both of those are different form their iOS counterparts, I am guessing that those are common navigation formats on Android. The reason they are on the top is because the phone have navigation buttons along the bottom, and you don't want to put a bunch of action buttons next to the "close" button.

On both apps, the primary mode of navigation between those 4 sections are via lateral thumb-swipes. (as opposed to clicking on the buttons)

So the buttons are acting more as visual indicator of the current screen, rather than as navigation buttons.

And because eyes have tendency to look upper-half of screen, visual indicators are more prominent when placed at the top, rather than at bottom.

In a nutshell, the reason why buttons are at the top has more to do with the fact that they're acting as indicator, and less to do with the "thumb-ability" of its location.

Sad reality is, on larger devices, both top and bottom of the screens are quite difficult to access for one-handed operation, particularly for females whose hands are nearly 3/4" shorter and 2/5" narrower than male hands.

Had those 4 buttons been function-buttons (hence no lateral-swipe access), Twitter and Vine would've put them at the bottom of the screen, because bottom it is still marginally more thumb friendly than the top, even on larger phones.

One reason I've heard why they do this is likely because Android phones are making the shift from having the menu, home, and back buttons to be soft buttons. If the navigation strips were at the bottom, they'd be right above those buttons. It's likely that you'll hit one of those buttons accidentally, especially if you're using the flatter part of your thumb. If it's at the top, at least you'll likely be using the tips of your finger or thumb.

Also, like another person mentioned, it's a design pattern standard for Android. Since this issue doesn't exist with iOS, the iOS standard has the navigation tabs at the bottom.

Not the answer you're looking for? Browse other questions tagged mobile navigation or ask your own question.

7
Mobile Website: navigation at the bottom of the page with an anchor link at the top
0
Navigation bar and Toolbar in ipad app at top of screen - apple's approval?
3
Is it harder to locate a link in the side navigation compared to top navigation
3
Why is mobile sticky navigation always on top of the browser?
3
Is iOS navigation bar placement at the top of screen a design flaw?
1
How user-friendly is a navbar that extends across the right half of the top strip?
2
Highlighting parent in the top-most navigation
0
Why would a mobile app have its home screen in the center of a navigation bar?
1
What is the thinnest a top bar can be for effective touch navigation on mobile devices?