I have a GANTT planning application where each activity or job has a status. In the next release users asked for the possibility to add colors to activity statuses however I need to choose a standard coloring for the pre-configured activity statuses.

The possible activity statuses are:

OPEN, CANCELED, TO BE CONFIRMED, DEFERRED OR POSTPONED, SUSPENDED, CLOSED

I would like the colors to be intuitive, and so possibly to imitate some well known and studied interface or program.

I would also like to avoid the red, it would indeed give the impression of something wrong and would grab too much attention while instead all statuses above have to be all perfectly legal. I want also to avoid people not setting the status to some state because the color might give an idea of something not ok.

These are the colors I came with just by intuition:

to be confirmed and postponed are similar color on purpose.. they both should be similar to an open activity in my opinion and grab some attention.

There are many studies about colour, but what is important is to use bright colours for the things that require action.

We associate actions with the traffic lights. Green go, yellow check if you have time and red stop.

Postponed- Requires a bright colour, but not inmediate action - so blue is an option

Cancelled - Suspended and Closed = Can be shades of grey because they don't require an action. If suspended can go back into Open, I would suggest then a different colour. 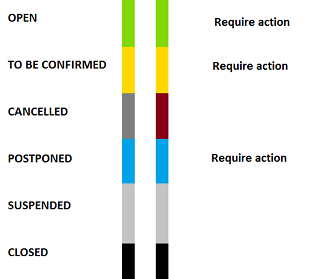 I am adding two versions of cancelled. One red and one grey. I would support the red but I know that the person who published the question was trying to avoid this colour, so I suggested a dark red that will not look as an error- failing that, a grey can be used.

AFAIK, there is no such color binding for Gantt charts, so any hard binding would be making user adapt to some idea custom for such tool, and making users adapt to something uncommon is (or just: may be) bad UX. Thus, there are two things I would consider:

BTW - Postponed and TBC are definitely too close in your proposal.

What is it exactly that you want to communicate? As far as I'm aware, the purpose of a gantt chart is to visualize the break down a project into a series of smaller tasks. In this context I'd say the open tasks are most important, the unconfirmed tasks are second and the rest is hardly relevant, except perhaps for the project manager. So all you need to do is to translate the hierarchy of importance into visibility. Open tasks should catch the eye, unconfirmed tasks should be visible, but not stand out, whereas all the other tasks may be visible, but only in the background. Visibility, then, is not determined by color but by contrast. So the most eyecatching tasks should contrast as much as possible. Against a white background, that means a dark color. Purple is the darkest color, but may have some unwanted connotations. Therefor blue, another dark color, is possibly the best choice in this case. The unconfirmed tasks can be grey. It should be a rather dark grey, though not darker than the blue. The other, less important tasks, can also be grey, but light as to diminish the contrast.

Obviously, I made some assumptions about the purpose and the context of the chart that may be wrong. But I suppose you get my drift... 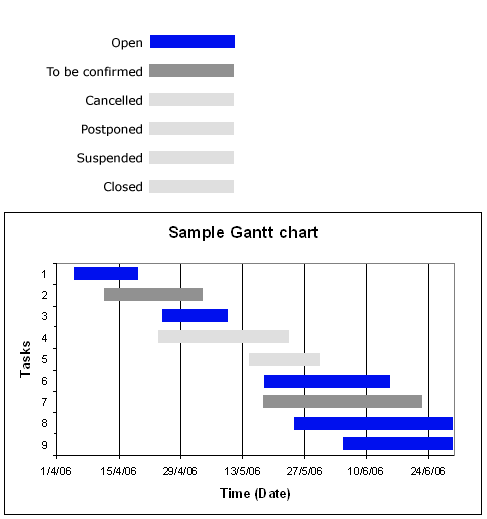 Not the answer you're looking for? Browse other questions tagged color-scheme planning or ask your own question.