Is there a better character than the asterisk to indicate a modified document?

In Windows applications it seems to be a common way to indicate modified, unsaved documents with an asterisk * character.

E.g. this is how Visual Studio .NET 2012 indicates a modified document:

When the document is saved to disk, the asterisk character disappears again. I'm currently using the same method in my own applications, too.

Since I loved how Microsoft replaced the * in password fields by the much clearer • character, I am thinking about something similar for indicating my unsaved documents, too.

Unfortunately, I think the • for indicating "feels" not quite right.

So my questions are:

As commented by kedar, I've tried the text editor Sublime Text 2 to see how they do it:

You definitely should not make users learn new patterns (especially only due to personal preference).

I think the right way to go is to follow the common practice, and I believe (please correct me if I'm wrong) the common practice in this case is using asterisk. You will, definitely, find other patterns in various applications, yet in this case, I think asterisk is the most recognizable one if you are limited to one character only.

The other way to go is to add "modified" or similar text on the tab, but it occupies way more space.

The usage of the asterisks as an indicator for a modified in-memory change is something that appears mostly on the Windows platform. Mac and Linux have not been too quick to follow this, but there are a few multi-platform editors that do use it.

The asterisks is used when the UI element (title bar or tab) is capable of displaying only text. If that UI element supports icons associated with the text, then your alternative is a more informative icon.

MDI (Multi Document Interface) seems to be the most common place where this is done, and I can only assume it comes from the challenges of a user trying to multi-task. Being able to work on more than one document at a time raises the risk of data loss. If a user makes changes to document A, and then switches to document B. They no longer have document A at the top of the window stack, and may forget to save their changes until they exit the application. In the event of a power failure their changes will be lost.

On the Mac OS platform the MDI interface is less popular. Instead it uses multiple editors where each editor is associated with one document. It's the same multitasking behavior, but it's slightly different on the internals for the software. 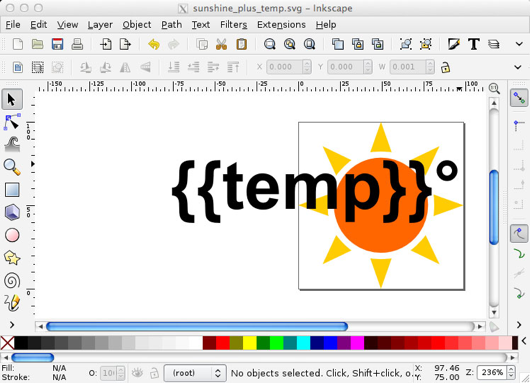 When the user switches from one document to the other the OS notifies one editor that it's switching to a background state. Whereas on Windows the same program stays active, and just the document of focus changes. So it's more common for a Mac to prompt to save changes, then to simply indicate it, but I'm not sure when this often happens.

In the first generation of MDI applications there weren't any tabs, and then later tabs were introduced to make it easier to switch documents. With the introduction of tabs the user was able to see all open documents, but there was are standards on how to indicate which of those documents has changed.

Three States For A Document

A document in an editor exists in 3 possible states.

When the document in memory is new. It's common to see the document icon as part of the tab, but the icon is modified to indicate a new state. 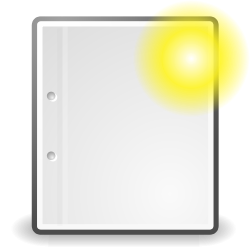 Now for the other states you can also change the icon, and for tabs where icons are used. I recommend to modify the icon and not use text to indicate a change of state.

Asterisk Before or After

I have seen the asterisk place in both the before or after positions to mean the same thing. The most common occurrence is the after position, and I think this is to prevent it from obscuring the name of the file. When you place it in the front it interferes with left-to-right reading. For example; mathew.txt* is easier to read then *mathew.txt. Also, when it's positioned at the end it won't interfere with sorting.

I was able to find a few images ranging from text editors to CAD drawings that demonstrate the after usage. So this confirms it's popularity by commonly used software. 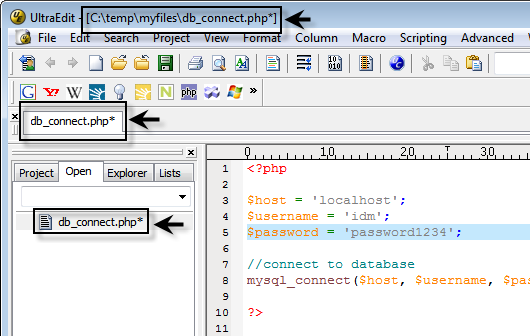 This is the least standardized UI feature. It seems that every editor implements it differently. The one implementation I prefer is a strong indicator that retains the ability to review the in-memory version before reloading the disk version.

Most editors simply display a pop-up prompt "The file has changed on disk, reload?" and you are left to make a decision. Without being able to review what you had in memory.

This interface demonstrates my preferred method. A non-blocking notification of the change with the option to reload it. Without blocking me from reviewing the in-memory copy before I reload the new version. 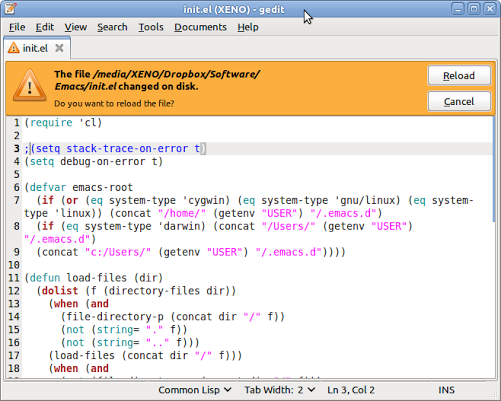 In answer to the which character or which other way? part of your question, the way I could think of is the use of color highlights on file tabs. Notepad++ does this.

Notepad++ displays a regular floppy icon on all file tabs, and disables the Save icon on the main toolbar for saved files. 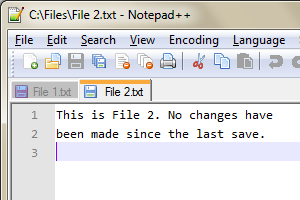 However, on unsaved file tabs, floppy icon turns red and the Save icon on the main toolbar is enabled for such files. 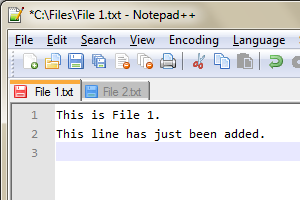 Despite this, Notepad++ still uses the regular convention as well and places an asterisk beside the filename on the titlebar of unsaved files. Why is this important? Because the titlebar's contents are still visible when the window is minimized, and the user knows he has unsaved work (however, this is only in the case when an unsaved tab is the active tab before minimization).

The point to note here is that though the red-floppy icon is very catchy, and draws attention to unsaved files, it is still a bad idea. Why? Because on inactive tabs, the red color takes a back seat (see first figure above). So when I have a load of unsaved files mixed among other files, it's hard to comprehend which is which -- a task that can otherwise be easily accomplished if asterisks were used on file tabs.

While is it true that it is best to stick to established conventions, there is always scope for betterment. Microsoft did it by replacing the * with • in passwords fields, and so can you. If you're building a document reader, try color highlights for unsaved file tabs. Just do what Notepad++ didn't -- make sure to adequately highlight inactive tabs as well (without making them seem like active tabs!).

Unfortunately there is no standards not only for marking changes but for naming conventions inside window title. I experienced different cases with different software. The cases when changes are marked are: 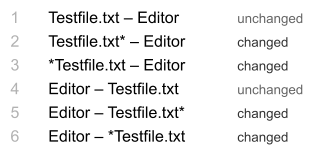 More broad question for me is not the symbol itself but visibility of status. Having reading convention left-to-right I'd prefer 3rd line and 5th line because of more quick perception. It is very fast to look at the start or end of line.

You can use the • character instead of * as it is used in text editor "Sublime Text 2". There they have used • to indicate unsaved document.

But using * will be more correct as it is more vivid to the user. Hence the suggestion will be of using * only.

Instead of deciding that you need a new character to identify that a file is "unsaved" consider using something similar to Alan Cooper's Unified File Model.

In your example of Visual Studio, imagine if every change were saved in a history on disk. Every time you open the IDE, your entire edit history on that file is available to you. You can create "milestones" which are akin to "tags" in an SCM. Absolutely none of your changes are ever lost. If your system/software crashes, you won't lose your work. You never have to hit Ctrl+s again. As a user, you can "trust" your software to work for you and never have to worry about saving files again. In this case, you don't need a character on the file name to indicate it hasn't been saved.

My explanation for the usage of the *: * is associated with an anchor or sorts. It means there is an associated piece of information somewhere else (usually at the end/bottom). Our eyes have been accustomed to distinguish the * quite well due to all the places we see it (adverts, terms and conditions, banners, etc.) It catches our attention.

The • seems like a simplified version of *. Arguably it might be good enough to catch our attention too. Can be a part of the minimalist design.

The purpose of the * or • is to grab the user's attention regarding unsaved changes.

A good practice that I have seen some editors follow is to show 'Last Saved' or 'File up-to-date' status indicator. It can act as a stand alone indicator or can be used in conjuncture with the * or •.

I think that asterisk is not a helpful in the end of file name. Try to paste it on the beginning. The better is color coding. For example you can color tab in light red or make it grey and disable to close.

There are so many programs (Fireworks, Dreamweaver, Notepad++) that do signify a modified document this way, that users have become so used to it then it is worth sticking with.

But for example NetBeans they use different colours and this isn't particularly hard for users to grasp, so there certainly are other ways of doing it.

If using another character, one that is not commonly used elsewhere in the program would be best, I'd have thought, something like the tild (~) sign possibly.

The star * is OK. But in the first screen photo it is too close to the file name, I hardly see it. It would be better if the star were spaced from the file name. And I prefer having the star before the file name, like Eclipse does. This too makes the star more visible.

An idea you could do is changing lightly the tab drawing. An example (Embarcadero Delphi):

I'm no UX expert, but I use that interface everyday and it doesn't have the problems pointed by SNag's. Just an little suggestion.

Because nobody else has mentioned it: SublimeText's use of the • character in its title conforms to the way it changes the close tab icon (x) to a circle when edits have been made:

Just an idea... could you use a different font treatment? For example a slight difference in color and italics? i.e. "Saved.txt" vs. "Edited.txt" - hope that helps.

Interestingly, I particularly like the way Embarcadero's RAD Studio represents with a pencil over the icon.

Not the answer you're looking for? Browse other questions tagged gui-design indicator or ask your own question.