Should apps' design evolve according to the OS version?

In iOS 7, Apple revamped the whole OS's look and feel. Removing a lot of gloss and 3D stylistic elements.

Does this mean that the apps built for iOS 7 must change as well to match this new style? Which one will most of the users expect; the new flat design or the older traditional one?

The main reason for the guidelines on all the OSes for application developers is so that they can maintain a look and feel of the app which is quite similar to OS itself. This is one of the reasons why you should use the system controls and widgets as far as possible, rather than reinventing your own style.

With that in mind, it is always in your interest to update the look and feel of your app to match that of the system. It prevents inconsistency in the user experience while helping the user adapt to the app by using familiar controls/gestures/etc.

If there's a direct correlation between the software and the OS it runs on, then yes, it makes perfect sense that--at least by default--some level of parity should be created in the UIs.

If there's not a direct correlation, then it's a bit trickier. If your app runs on iOS5 and iOS7, they really are entirely different visual styles, but it's one app, so it's a bit of a toss-up.

Some things to consider with iOS, however: 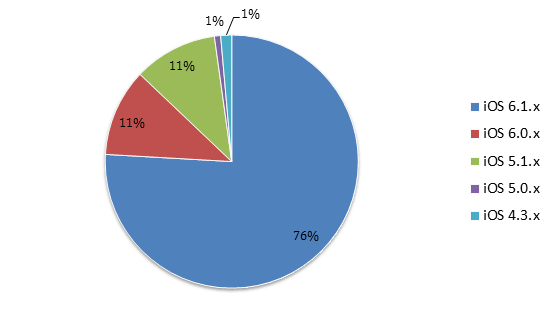 So, some 6 months later or so I'm now neck deep in a mobile app redesign to bring things into alignment with iOS7. I'm getting more and more skeptical that that is the way to go. iOS7 was such a drastic change from the previous 6 versions that unless your app was relying solely on native UI elements in the first place, one needs to be careful about updating their own UI. I've begun to see a lot of apps get a quick 'updated for iOS7' update only to download them and realize it's pretty much the same UI as the app had before, but now there's this awkward over-use of Helvetica and blurred overlays.

So, my new opinion is, at least with iOS7: if your app has closely adhered to the native iOS UI from day one, yes, absolutely upgrade the UI to iOS7. In fact, if your app relied on native elements, this should be a rather trivial update.

If, however, your app had a fairly custom UI, be very selective in terms of what you decide to update. You don't want to end up with an Frankenstein-esque UI consisting of half your UI and half iOS7.

Answer to this question is spread over two domains.

If App's look and feel is not iOS7 like and it is run on iOS7, by and large this wouldn't affect usability but can affect user-experience as user can find variation between UI controls. However this style noise is inevitable and would remain there for several years to come until new apps are made and old ones are upgraded. But the way I see, users will have considerable tolerance to this aspect as most the the Apps would exhibit such style variation. So between now and next two years, you are pretty safe to keep using old apps.

In terms of Brand Strategy, this change in UI is huge and would have a negative impact on the brands who want to be seen as trendy, contemporary, up-to-date and style oriented. So for the sake of brand image, they will have to upgrade.

Changes bring not only consistent look and feel of new platform but also have some business points as:

Sometimes you can see update fever among competitive products of different companies.

At the same time changes take time, money and could be risky. There are always be people which resist changes. But if changes are made gently and you have enough resourses – this is your evolution way. It's reasonable to improve the stuff which brings you money.

Not the answer you're looking for? Browse other questions tagged design-patterns ios themes mobile-application lookandfeel or ask your own question.

0
Similar Template Design Causes "Imitation" Concerns
1
Can the design be different for the website and the mobile app version?
2
Change the UI design step by step or at one go?
12
UI/UX in an Agile Development Environment
4
Do we really need to ask for password on iOS "login with email" screen?
2
Using native iOS / Android icons on another App expecting users to understand it
5
Android TabStrip navigation alternative on iOS
1
Accordions on iOS, and Android
3
Dropdown menus: Should the parent item be clickable?