Asking feedback/rating for a mobile app? 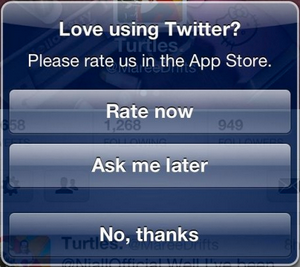 Fig.1: A typical prompt, asking user for feedback/rating in iOS

Any serious smartphone users must have seen a message similar to Fig.1 above at least once. Variations of such prompt include: "Please give us 5 star ratings if you love this app!", "Rate us :)", "Your rating helps improve this app!", etc. Basically, Fig.1 asks user to leave a (nice) feedback/rating for the app on its AppStore(or equivalents).

When and how often should a mobile app user be asked to leave a feedback/ratings?

What are the significant user's behavioral statistics that should be based on to generate Fig.1? For example:

What would be the optimal min/max frequency of Fig.1 generation? By optimal, I mean users are not to be bothered too much, yet developers gain maximum output of great feedbacks from users?

Should users have an option to opt-out from receiving Fig.1 at all?

#5. Universal User-statistics for All Mobile Apps?

Should every app of all kinds of user base ask this message? If any, should any mobile app stop generating Fig.1 when target conditions are met (e.g. downloads count, active user count, feedback count)?

Should users be asked to leave a feedback before deleting as seen in Fig.2 below? Users are more likely to leave very critical review on app deletion, but this kind of feedback will be very helpful for the developers to strengthen their app's weakness for next version release. 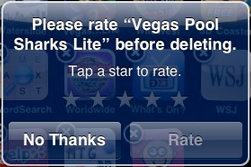 Asking for feedback is no good from UX perspective at all, but it is good from the conversion point of view. You need ratings, as they convert to downloads, of course only if they are good good.

Before asking a question, you need to make sure user got familiar with using the app. So asking for this before this moment is a waste and will either not result in leaving comments at all or users will get frustrated they are nagged with this question and will leave a lower comment.

So, regarding when, you should do this after some runs, and even better (if you can determine it) after the user has used the app heavily. If he does, it means that this app is useful for him and there is a better chance for a good comment.

Asking upon app deletion is no good, as you ask the user what he thinks about the app while he does not need it any more. So it's not useful for him, and you cannot expect him to leave a good rating/comment.

Speaking of the frequency, I believe that you can repeat it every some time (no clue how often, but every 10th run may be a good idea) and you can do it even endlessly if you provide the "Don't bother me again" option. It is crucial to have it. If you don't provide it, which is, again, bad UX, you should limit the nags appearance (I would set a max of two times it appears).

There are, however, other ways to ask users for feedback:

Background on the answer

I believe I have seen some other options to ask for the user for feedback, ratings or spreading the word without getting in-the-face of the user.

Of course, games have the upper hand, when there's any sort of micro-transaction scheme, you can win some points (or whatever the monetary element is in the game) by doing certain actions: liking the page on Facebook, following on Twitter, rating the app or writing a review, etc. These methods are surely fallible, but it does encourage the user to do something for them as the user gets something in return for their action.

This effect is likely what is meant to happen when the message is "a good rating helps us improve the app", so that the user feels that he or she is also getting something from doing that.

Not too long ago, Feedly (the feed reader service that gained a whole lot of users from Google Reader's shutdown) asked users for feedback, with an interesting approach: the question was in the spirit of "We're going to get better, what do you want done?" (and results).

Besides the request being non-intrusive (they just popup a notification bar that stays out of your way while using the application), the way that the feedback was provided was encouraging enough to get something out of it. I believe this was the major difference in which they were able to get useful feedback from their users.

As Dominik Oslizlo mentioned, asking for feedback is rarely a good experience for the user, unless he gets something out of that. If you have to, make sure that you can provide a sense of satisfaction for doing so.

I know that not everyone likes being asked to rate apps, but lets face it, establishing a large enough set of quality ratings is necessary to gain app store traction and convince potential customers that your product is of a high enough quality, and has enough of a network effect to not be useless (where applicable).

If you look at almost every app you use, you will find a rating prompt like this. There is an understanding in the app building community that your app will fair better if you have a prompt like this. But the real issue here is that you need to be communicating with your customers. You need to be listening to what your customers have to say. You should make sure you ask customers who don't seem to like your app why that is, and you should be making it easy for customers who love your app to say so! The real problem is how you figure out how to make a distinction between those two segments of users.

As you've touched upon, one way of assembling a segment of users that are having a good time with your app is to just wait for the app to be used for a certain amount of time. Let's say 30 days, 10 app starts, and 10 app-specific significant events. But the user is in your app. They are using it each day. Is that the best you can do to qualify the user? Probably not. But you also probably won't know how to qualify them based on behavior for a while, and even then, you will have to be keeping track of your app analytics in regards to communication on a person by person basis.

There are services out there that do just this. I am a founder of one such company, www.apptentive.com, that does this and much more. One of the cool things about using analytics to power your rating prompt is that you can change up the necessary conditions for showing the prompt without pushing an update to your app. Plus, you can drive all sorts of communication. If you have a chance, please check it out!

5
Best practices for asking user to "Rate this app"?
2
Sport app, when best to ask to review app

2
Should I provide a "Forgot Password" option for a one-time sign in Android application?
6
Best pattern for posting to social networks
2
Rating or Grading on touch devices (smartphones/tablets)
2
Mobile app UI state restoration in relation to the length of inactivity time
0
User profile design for mobile appliation
0
alternative to scrollable tab bar for mobile
4
How to ask for details to a poor reviewer?
4
How do you decide whether you should show a success message or not?
3
How to deny the usage of my product to a user?
4
How to globally provide real-time feedback for async operations?