In my traditional desktop app (not web app), I have a screen with a relatively short list of items (typically 10 - 20), from which the user can select any combination (including all).

The items have multiple attributes (3 Boolean flags and a tag).

My initial though was to use checkboxes and a combo box. The issue I've found is that if a tag and 2 checkboxes are selected and the user unchecks a checkbox, the items selected are no longer reflected by the attributes selected/ticked.

To complicate matters, the user can directly tick/untick any item(s) in the list, the tag & checkboxes are merely shortcuts.

Example: I've ticked Diesel, but unticked Convertibles.
The list of cars selected now doesn't include the SLK, which is a diesel but isn't selected because it's also a convertible. 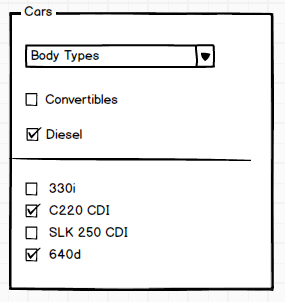 I can think of 2 possible solutions (neither of which seem ideal):

Possibly, you could try experimenting with a natural language search/filter UI. I am still not very sure of the context, but for the given scenario, something like this could be easy for the users to make sense quickly - See attached.

It depends of your task. For example if you rent a car the user could filter car list by some parameters but still has some preferences on car model. Then the solution could be as on my picture, just color-code the cars which are matched the filter, see picture. The filter serves as hint but user still able to choose any car. 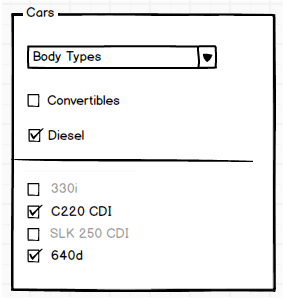 If you prefer rigid filter then just hide options which are not matched.

This is less a UX question, more of a functionality question. You need to decide which of the following requirements your app should support:

In case 2, I recommend you use a tristate checkbox. That should make it very clear whether the user is selecting positively, negatively, or not at all.

In case 1, I can think of two options:

Here is my solution as my background is Interaction UI Design...

Why don't you add another control for Strict and Loose Matching criteria, it will simplify things 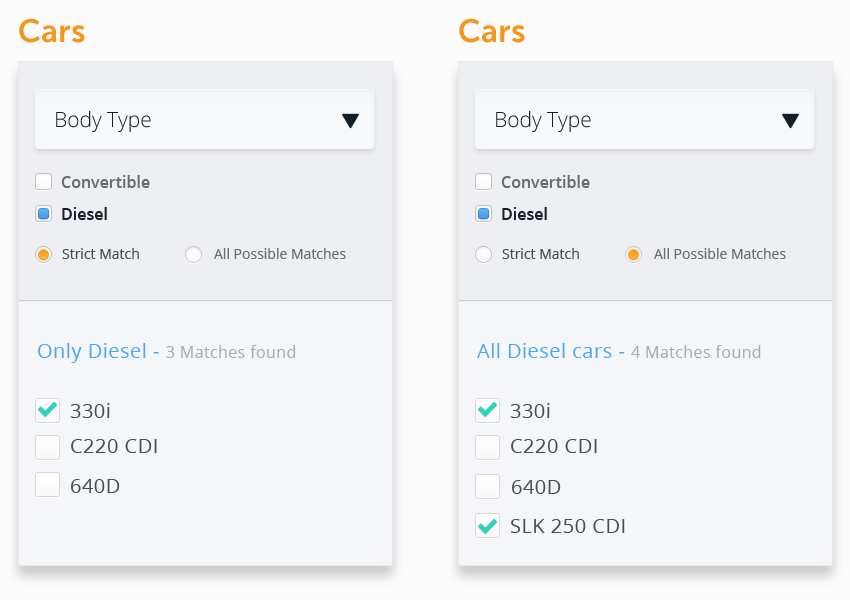 Not the answer you're looking for? Browse other questions tagged gui-design checkboxes multi-selection or ask your own question.

1
Design of location & tag based filtering
2
selecting multiple items from a short list, and marking one of them as “leader”
6
Selecting Multiple USA States from List
13
Multi-selection dropdown list implementation best practice
2
How to show selected items list with the ability to remove them
1
Multi-edit reusing existing dialogs
1
Choice of UI widget for marking item in list as unsatisfactory
1
Is this a good concept: “Select one or multiple items using checkboxes and use a radio button to select all”?
2
Multiselect confirmation - App Design
0
Initial state of checkboxes for basic list filtering