Why take user all the way to App store to rate an app?

Recently being annoyed by apps asking to rate them in the App store this question came to my mind . Though I am willing to rate the app I don't want to navigate to the app store and then wait for stuff to load up . Why not provide user a form within the app to rate it ? 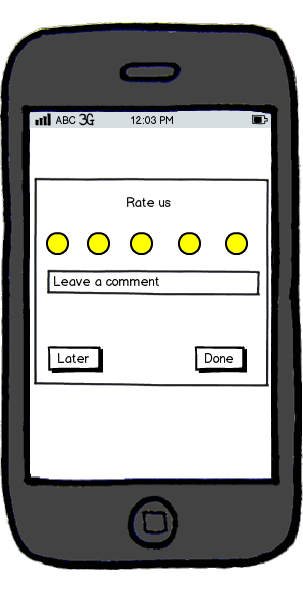 (Circles are stars in disguise)

Is there a drawback to this approach ?

Apple want to make sure that people don't rate apps multiple times. When you are using an app, you aren't necessarily signed in or authenticated on Apple's system. Forcing you to rate the app in an environment where you have to sign in, is a simple way to limit vote manipulation.

Additionally, if Apple did it via an API that apps could use, there is little stopping an app from sending through better ratings that a user gave, and therefore manipulating the voting system.

Not the answer you're looking for? Browse other questions tagged iphone applications ratings apple or ask your own question.

18
Can a page rating with feedback be more effective than a longer usability survey for identifying problem areas?
3
How to display “Helpful” rate in the result page?
2
Indicate mixed good and bad rating
0
Replacing number-limited tab-navigation in application
1
Why does iPhone's Reminder App not show on home screen?
0
Bulk actions on a left-navigation tree of folders/contents - Best way to handle this experience?
5
Should I choose a short or lengthy title for my app on App Store?
0
How to make the user rate the content