Note that this is not a duplicate of this question.

I reviewed it before asking the question and the accepted answer is stated as unacceptable in the "Solutions that won't work" section below.

My blog is responsive so the same page is served up no matter what device or screen size is requesting it, and page styles change the look/feel based on the width of the viewport. Currently I get an undesirable horizontal scrollbar if there happens to be some code that is very long and doesn't break.

One of the code examples that causes this issue (see the page):

The line will not break until after the MouseEvent. This is what it looks like on a Galaxy Nexus: 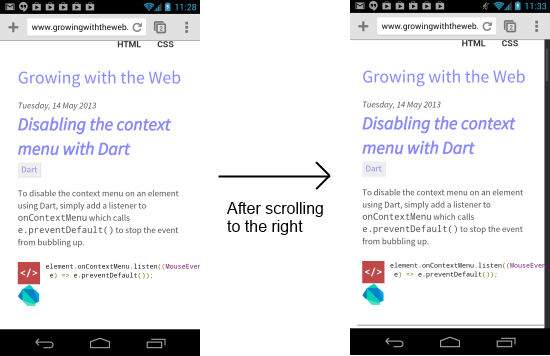 Note that the code cuts through the padding of the page before going off the page, this isn't desireable

I'd be very interested to hear what people think the best way(s) to approach this problem would be. Here are some ideas that I've come up with:

Note that a lot of solutions to these problems may not be possible without the use of client side scripting. This is highly undesirable as the script would have to be run attached to the resize event which I'd rather not do. I'd also prefer to have absolutely all presentation related implementation in the CSS where it belongs.

Put the code in a sub window with a scrollbar

Not the answer you're looking for? Browse other questions tagged website-design usability responsive-design discovery code or ask your own question.

10
How should text wrap in a code block?

2
Responsive vs Full Mobile Solution... with a twist.
10
How should text wrap in a code block?
2
Does responsive design ruin accessibility?
25
Best way to display code to non-programmers
1
Is it bad UX to disable features (to protect the user)?
2
Best way to indicate horizontally scrollable sections to a user?
2
Non-fullscreen sections overflow handling
3
Differentiate Design Systems incl. code-snippets from repositories