Creating an emotional bond with the user on a business site

I'm currently working for a client on a site which offers search services. The users can rent modules that perform an action 24/7, namely searching an internal index for specific items. Each module can perform exactly one action. For example, if you want to do 4 searches simultaneously you would have to rent 4 modules. That's pretty much everything the site has to offer.

The modules come at very low prices; the first three are free and the user should be driven to rent more of them. Now, I had the idea to transform this abstract concept of modules into something more physical: cute animated robots.

The three robots would sit around doing their searching and eventually jump up and wave happily if they find something. I want to give them basic facial expressions so they feel real and the user can emotionally connect to them.

They should be so likable that the user wants to rent more of them and keep them.

Do you think this is a good idea for a business website? Taking away the abstract management of modules and making it more playful by interacting with "real intelligent robots". Can an emotional bond be established?

What are your experiences in keeping customers loyal by creating emotional bonds between them and the service?

Edit: The site is searching for car sales and is aimed at car dealers, that look for pre-owned cars online. The car dealers tell the bot what it should look for. As soon as someone wants to sale a car which matches the criteria, the bot will tell the car dealer.

There have been studies and situations where having the option to create a playful connection or allowing the user to have fun have actually increased conversion. A good example of this can be taken from the Strikingly.com referral page where putting a cat on the referral site and requiring users to refer someone to see the cat dance doubled the conversions. To quote the article :

It’s just a basic form - enter your name and some email addresses and you can tell your friends about Striking.ly. We drew inspiration from Dropbox’s referral system. But the page itself looked empty, and there was an awful lot of extra space on the sides. We wondered how we can use that space to make the invitation system more… inviting.

At first we experimented with clip art in the background - faded illustrations of gifts and happy faces and such. It looked OK, but it was still kind of boring. And I’m not much of an illustrator so it was a little awkward to have random graphics popping up.

Dafeng, our backend developer and a perennial 9GAG fan, jokingly suggested that we put a dancing cat on this page. I took him seriously. And we came up with this: 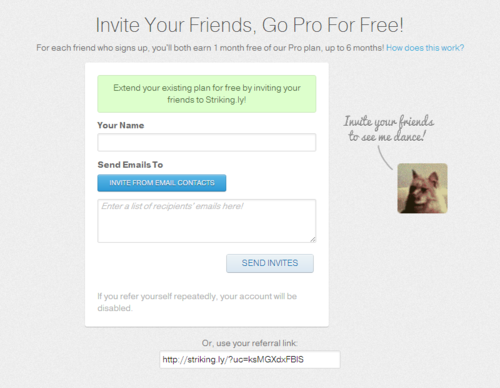 Once you submit the form, the cat will dance for you. To get the full effect, see it for yourself. (Snatch a Strikingly account if you don’t have one yet!) This little kitty actually doubled our conversion rate for this page (# of people who send invitations / # of people who land on the page). A few people sent invites to themselves just to see the cat, but they’re in the minority.

I also recommend reading this article which talks about how playful widgets keeps your users interested and also can help conversion as they might spend more time on the site.

That said, there are a couple of key things you need to note

I like how MailChimp does it. When you log in to your dashboard, you see the MailChimp monkey in the top-left corner of the nav. Every time you refresh the page or go to a different page, the monkey says something different in a speech bubble. Most of the time it's funny with a link to a YouTube video, etc., and sometimes it's just something inspirational.

I like this because it personifies MailChimp's mascot and just gives an overall "playfullness" to the brand and the app. To me, it doesn't add any usefullness to the app, but it does tell me that MailChimp is fun and cares about it's customers. It helps me to emotionally connect with the app on a deeper level. Here's a sample screen of what I'm talking about:

If you work for a big corporate bank, for example, this probably won't go over well :)

It could also fit quite nicely if you were to have a robot that used speech bubbles to explain things around the site - to walk the user through the actions that they are performing.

Partly that's because you are also putting something tangible in people's minds when they purchase another module/robot. For example, consider purchasing more storage space at a site like dropbox. It's not fun, you're paying them money for something you already have, just more of it. Note that this is technically the same as saying that you're purchasing another one of what you already have (so you can use it to hold more of your stuff). The difference is in the feeling generated in the user. I will happily go to a store and buy another milk crate to hold more stuff in my house - I have too much stuff for just the one milk crate. I'm buying another one not just more of what I already have. It's distinct and tangible.

For your purposes, a robot that has a bit of a personality (as well as walking you through with helpful explanations) is definitely a good idea. I don't think that it makes it any less professional or business-like - you're trying to market this to people, who hopefully are computer savvy, but may not be. The goal is to make using these modules fun and simple, as well as effective. You want them to be approachable - the consideration of spending money on another module/robot is going to come at the same time as the prospect of setting that new one up - you want both actions to be seamless and easy.

So, in summary, robots are a good idea because they are emotionally appealing, tangible, helpful, and approachable.

7
Protecting the user experience with business cases.
4
Creating Interfaces that Build Emotional Bonds
68
Handling the death of a user
0
Implications and knock on effects of late scheduled emails to the user experience?
2
Should I show the user how many views its content has received?
3
How to deny the usage of my product to a user?