I'm building a feature where the user is asked to send customized messages to their friends. The process involves two steps:

After the user hits send, they should be prompted to refer another friend (with an message indicating the previous message was completed successfully). This cycle can continue for as long as the user wants.

I want only want the user to focus on one step at a time (either selecting friends or selecting customizations), so I want to hide or deemphasize the other panes.

There will be a few other panes as well, such as showing that the first message was sent (an acknowledgement pane), and a detailed instructions pane (which will be shown at first, but should probably be hidden later -- the individual components will have simplified instructions)

I am struggling with the best way to do this.

I've thought of a few approaches:

I don't like the accordion approaches because it might not be clear that the user can go back to view previously collapsed panes (such as the instructions pane). Scrolling has the advantage that if the user wants to go back, they already know how to scroll up the page.

I don't like the scrolling approach because if we're scrolling back UP the page when transitioning from step 2 to step 1, while resetting panes for step 1 and 2, we'll be mixing spatial and temporal history -- sometimes, scrolling up/down "goes back/forwrad in time" e.g, travel to earlier/later states, but other times, scrolling indicates a resetting of states altogether.

What you're trying to do isn't actually cyclical. Technically it might look like that, but to the user it doesn't. A user does repeat the task over and over, but each repetition actually moves him forward through what he's trying to accomplish (e.g. send stuff to all friends) and forward through time.

Think of it as moving down list, adding an entry for each message that has been sent.

I don't think it makes sense that someone should choose a friend before choosing a customization or vice versa. Just allow the user access to both options at once, but only activate the submit button when both choices are made. But you could make it a little two screen wizard if you like, that's easy enough. 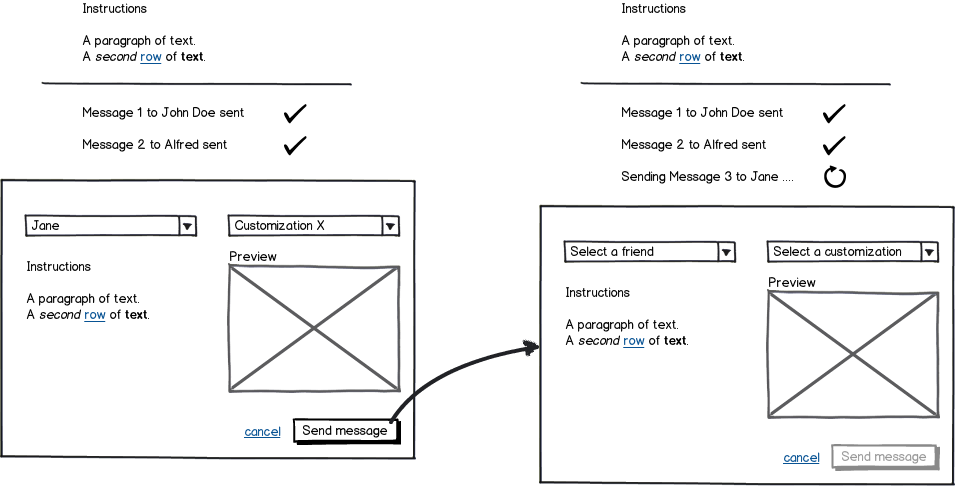 Just an idea: you could put the main instructions at the top of the list and make it scroll out of view as the users adds sent messages. Presumably, once he's sent a few messages he'll not need the instructions anymore.

34
Is infinite scrolling justifiable?
2
Best way to make user complete each accordion of content
3
What is the best way to show Log Information of user actions
2
What do you call a web layout style where a single scrollbar moves all content until each one hits bottom?
4
What do users expect when showing list of friends who use the app vs friends that don't?
5
Best way to capture payment for new customers
2
Best way to indicate horizontally scrollable sections to a user?
1
Scrollbars for an infinite plane
2
When reading a long passage, when do users tend to scroll the page?
2
Horizontal scroll combined with infinite scrolling page