Approaches for setting a time period

In a GUI application I have a setting for a time interval. In this case, it's a refresh period, but the same issue comes up when you set how early you want a calendar reminder, how long to snooze an alarm, how long to keep old messages, &c.

There seem to be three accepted patterns for doing this:

There are also combinations of the above approaches, such as a slider with an editable text field next to it, or a text field that lets you enter free-form text such as "1 week". Are there any other accepted patterns for setting a time interval graphically? I'm especially looking for something that allows precise data entry over a wide range of input values, and I don't think any of the approaches I've listed are good enough.

The problem with having such locale-dependent and non-constant things as months and years is their inherent ambiguity. "Does a month equal 28, 29, 30 or 31 days?" "Are we talking about the bankers' year of 360 days, or 365, or 365 1/4 or 366 days? (putting aside more weird numbers)" With this in mind, a combination of numerical controls seems to fit the bill:

Please note that these are stock up/down buttons and they are horrible from the mobile/touch perspective. In reality, one needs larger up/down buttons directly above and below the "steppers" (like these):

They have a combo-box, where frequent time-values can be easily picked:

If you want something more accurate, you can edit the textbox directly, where the units needs to be specified. It auto-completes with the most probable unit:

It looks like it's able to support most cases; you can quickly set from a predefined list, but also specify something accurate when you need it.

So the real question is how great a need do your users' have for custom intervals? Do your users NEED to be able to input one month and 2 days? Probably not all that likely and you don't really want to design for exceptions.

Sliders are fun but can be a time consuming to QA and of course have accessibility issues to overcome.

In the case of one month and 2 days, the user could probably use a reminder at the end of the month that in 2 days, they need to do something. Anything else can be handled via the weeks choice.

The combo of inputting a qualifier - number, beside a preset selection of minutes, hours, days, weeks, months gives you the broadest set of user controls with limited possibility of input error.

I think we'd need to know a little more about your users before we can give a definitive answer for them. In general, the combo works.

As is the case with may UX issues, the "best" solution depends on what you expect will be in your users' minds as they use your UI.

Going along with your three cases:

I thought so little of the existing methods that I decided to make a new one for a touchscreen interface, consisting of concentric dials. It's used as a "custom..." item in a list of preset intervals (because there are technical reasons for preferring certain intervals). It looks like this: 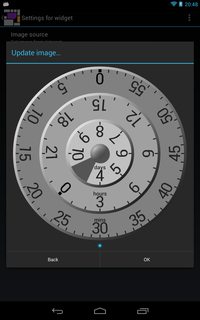 In the resized screen shot it's quite hard to see the unit labels, but they're "days", "hours", "minutes". The user drags any dial to rotate it, and at the end of a drag, the dial smoothly settles at a tick mark. (That is, you can't drag it to be in between two ticks.) Dragging across 0 increments or decrements the next dial smoothly. The user can also double-tap a dial to spin it to that point automatically. Catching the dial (by touching) while it's spinning interrupts the animation and allows a drag.

The innermost dial (for days) has a "cut-out". When numbers go behind the cut-out they're replaced. From the state shown in the screen shot, if you rotate anti-clockwise, 3 comes out from the cut-out; or if you rotate clockwise, 11 comes out from the cut-out. This means that the range of times isn't limited by the numbers on that dial: the maximum value could be arbitrarily high (but is limited to 30 days in my use case).

I was worried that it might be a little too hard to read off the current value, but this is mitigated in use by the enclosing screen (in the background here) displaying the current value in written form (in the user's language). I also made an experiment with having the read-off point for the dial on the right instead of the bottom, so the numbers would read left-to-right, but it looked very unnatural to have the numbers rotated that way. So far, the response from my trial group of users has been encouraging, and I'm waiting to learn how it performs "in the wild".

Not the answer you're looking for? Browse other questions tagged input time or ask your own question.

5
Is it better to put text field for drop down with more than 15 items?
6
Is there a pattern for cycling or toggling through time periods?
1
Display time period/duration in hours/minutes and man-day in web project management tool

15
Time (duration) entry in webapp - pros/cons of various designs
0
Numeric input - alternatives to slider / text field for mobile game?
4
Has anyone had any experience with inputs similar to apple's calendar “create quick event”?
2
Sorting data when some is entered as weeks and some as days
1
How to show both input and output on a slider?
1
Display time period/duration in hours/minutes and man-day in web project management tool
28
Which input control is recommended for a large value range?
0
best ux for users to input multiple strings
1
Most efficient way to ask users for days of the week and start/end time for each day?
1
Element to input Duration