How can the mode of a car's transmission be made more clear?

In a car, if you press the accelerator it can do one of three things:

The result depends on what gear the car is in, but in many cars (especially ones with manual transmission), there's little visible indication of what "mode" the car is in. 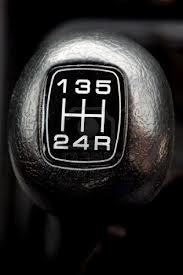 Aside from a slight shift in the position of the interface, there's no visual cue of the car's mode.

Consider this (hopefully hypothetical) situation: a teenager owns a manual transmission car. He drives into the mountains with a group of friends, and stops the car facing a cliff. Later in the day, there's some form of mountaineering accident (or bee sting or bear attack) incapacitating the driver. Under the pressure of the situation, his friend (a relatively inexperienced driver) gets into the driver seat instead. Whenever this friend parks his own car, he puts it in reverse, so without thinking, and without any visual cue, he assumes that this car is also in reverse and accelerates right off the cliff edge.

How could the mode of the car's transmission be made clearer to help prevent this error (without being an annoyance in day-to-day use)?

Assume that the driver wanted a manual transmission because he heard they're cheaper and get better gas mileage, and he likes the increased feeling of control it gives him. (Just saying "make the transmission an automatic" isn't an option for this user base.)

A common affordance which informs users about cars reversing in india is the use of audio tunes to inform the user that the car is currently in reverse. Though its a very good affordance which immediately informs the user and the people around him that the car is in reverse, it does suffer from the issue of contributing the noise pollution and also the problem of people selecting really weird car tunes. 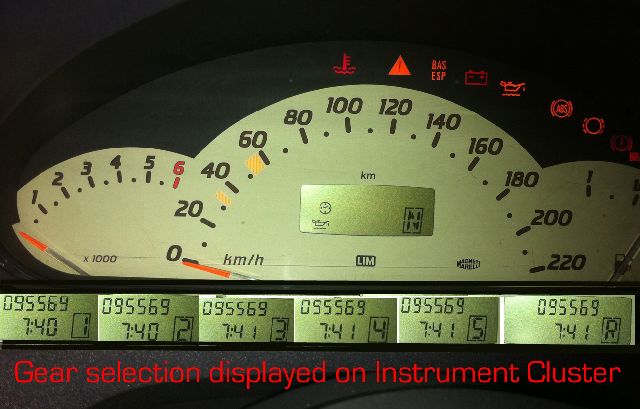 A few solutions could be:

This problem reminds me of two things, a quote and a similar situation in airplanes:

Everything should be made as simple as possible, but not simpler.

It's disputed who said that quote, but Einstein is the popular choice. The thought here is that at some point, making something more simple than it already is has the opposite effect. Adding indicators on the shifter or dashboard may make it seem more simple to drive, but in reality it makes it more difficult and isn't able to be a substitute for actual drivers training or a manual.

There's a popular UX story that discusses how you could theoretically make a cockpit "simpler", but that simplicity wouldn't make an airplane easier to fly, in fact it would make it more difficult.

The complex set of gauges and controls is designed for a trained pilot, the pilot who is flying for endless hours during their career. Making the cockpit more simple would only benefit that pilot in the "learning how to fly" process that happens in their first hours and years. Once the system has been learned, simplicity for the new user makes the system more cluttered for the experienced one.

Your example would be aimed at helping the beginning driver, but much like the airplane cockpit, making the controls more simple would benefit a very small minority and confuse the more experienced ones.

Another thing to think about is would your user feel comfortable driving with that new information? Using a manual transmission has a much more difficult challenge for drivers that knowing which gear is for forward or reverse movement: using the clutch. Think about hopping into the simplified cockpit that's absolutely perfect for new, untrained pilots. Would you feel comfortable taking off and flying yourself and your family around? You need a bit of confidence in both of these situations to do them well. Training would be best, but a set of instructions could be a decent substitute.

So, to answer the question, training or a set of instructions are the best ways to get your new driver familiar with the workings of a manual transmission.

This is not an answer. It is a lengthy comment on the phrasing of the question.

How could the mode of the car's transmission be made clearer to prevent this error?

Moving directly to a 'more information/feedback' solution to this type of error may not be the right answer. I recommend review of the current thinking on human error during system operation.

The problem is real, but I would rephrase it as:

How do you prevent a car from starting to move in a direction the driver did not intend?

Research on the causes of unintended acceleration is relevant here. For example, the evaluation of the problems with Toyota vehicles or Audi's in the 1980s. Lack of awareness of the mode of the car's transmission is not the only cause. Also, the problem is not restricted to cars with manual transmissions.

BTW, Nissan attempts to solve this problem for parking situations.

I would argue that when driving a car, which gear you are in other than when you are in a standstill isn't important. What is important is whether you need to change up or down a gear.

Although and extreme example, there were extensive tests on this in auto racing, and it was determined that the only information that a driver needed was whether he needed to change up or down a gear.

How about looking at it from a completely different view? Don't allow the car to start unless it is in neutral/park and the brakes are on. That eliminates the problem altogether: the car won't move when it first starts, and the driver has to put it in the proper gear after starting.

(Isn't that the way it works anyway? Or is that just how I always use it?)

Not the answer you're looking for? Browse other questions tagged feedback physical interface status cars or ask your own question.

9
Why is a manual transmission so complicated?

4
How do you show that a feature can be selected individually or combined with another feature?
3
Clarifying the controls in “draft” mode
0
How to get many questions in single flow without using the Next button causing server interruption till end of question set?
2
What's the best method to show how many enquiries are made for each item per week?
1
How can I visualize deviation from the standard as a badge?
148
Why is being “on hold” on the telephone not made less annoying?
1
How do we make immediate saving clear?
1
How do you stop people driving modern cars in daylight, in fog, without the lights on?
3
What's the maxium safe time that a user can be looking at the controls in a car rather than the road?