I have a table view which may have several items (rows), which in turn have more information that I want to be displayed in another view by tapping the row (common scenario). The point is, I'd like to allow users to edit the table content by adding/deleting items, and also to edit the details of a selected item.

1) Display a button to enable the table view editing mode for its rows, and enable a kind of "Save changes" button in the item's view for editing its details: 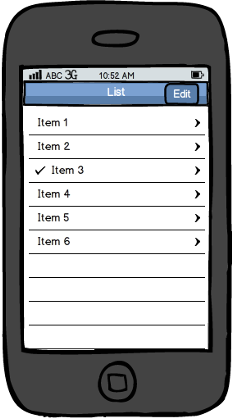 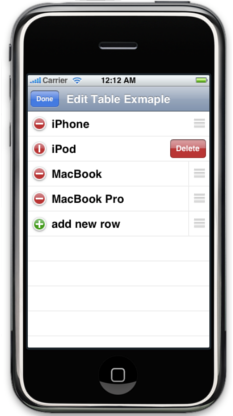 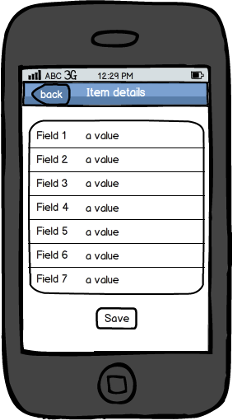 2) Instead of displaying the edit button in the view with the table, display a button to just add items and then allowing to edit item details as well as deleting the item in the details view (similar to Contacts app or Twitter/Facebook accounts in Settings app)

What should be the best way from the UX perspective? (Assuming that both meet Apple's guidelines...)

The first interaction pattern that you show is very close to the way that apple handle it in their built-in apps. The difference being that they don't have an "add new row" item. They use a clear + button in the navbar to achieve that - which is the right way to go.

If you use an item at the end of the list to add new items, you are not only breaking user expectation of what a list item is, but you are also going to run into problems when you have long lists, as the button will not be visible.

In your second pattern you are also breaking user expectation by making them select 'add' when they want to 'edit'. This is almost certain to cause major confusion.

For iOS the pattern of needing to add and edit items is common and has already been solved in one of two ways:

I have done usability testing both these methods, and have found that the second method has large usability problems. Despite it being a standard iOS approach, most people tested didn't realise what a 'detail disclosure' button was despite being long time iOS users.

As a result, I would recommend my option 1 (having a + and an edit button in the navbar) on iOS.

Not the answer you're looking for? Browse other questions tagged tables ios input inline-edit human-interface-guideline or ask your own question.

4
What is the best model for editing and viewing data that is summarized in a table?
1
Shifting a view into inline-edit mode VS. dedicated edit screen?
2
Navigation bar and buttons considerations for iOS
1
Handling selection and navigation in the same table view cell in iOS
8
Modal views vs popovers in iPad
1
Plain tables customization in iOS
7
How do I edit a table of text items in iOS?
5
Edit button or tap to edit
4
iOS: table view “Close”, “Edit” and “+” button placement in a navigation bar
0
Taking a user to an editable details view when clicking on the item (in it's list) while in edit mode? (iOS)