When to combine comboboxes?

Let's say that my GUI has two fields to configure: input and output. Both fields are implemented with comboboxes that may have the following values:

It happens that not every input value is compatible with all the output values. Let's say that it is only possible to have the following combinations:

So whenever a user chooses a value in the input combobox, the output combobox changes displaying only the compatible output values. According to Nielsen, this should be avoided.

Interacting menus, wherein the options in one menu change when users select something in another menu on the same page. Users get very confused when options come and go, and it is often hard to make a desired option visible when it depends on a selection in a different widget.

My question is: what is the best way to deal with this? Is it a good practice to combine these two comboboxes into a single one (like in the picture bellow)? What aspects should be considered when deciding to combine comboboxes or to split them? Is there a better approach for this? 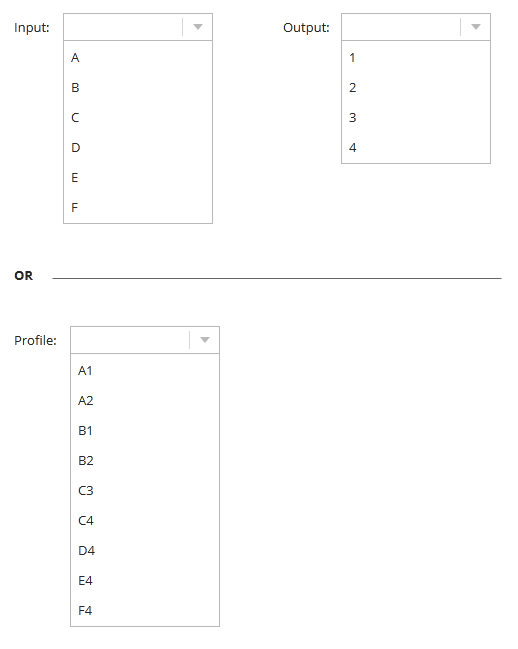 I have also seen that Adobe has an interesting solution for this: http://goo.gl/lRqet

Note that this is an interface for a web application to be displayed both in desktop and in tablets.

When you have long lists, or where unavailable options don't matter, you can simply leave them out. 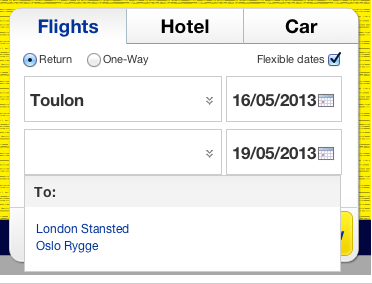 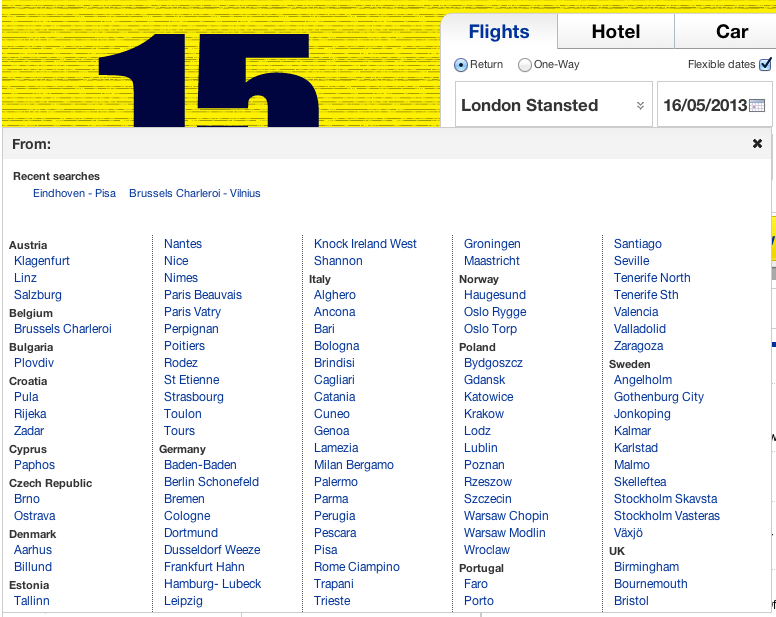 Short lists or where unavailable options do matter

In situations where the other options do matter (i.e. where knowing that you can't select them is important), or the list is very small, it is best to simply disable the options that are unavailable.

You can see examples of this in option menus in most apps. 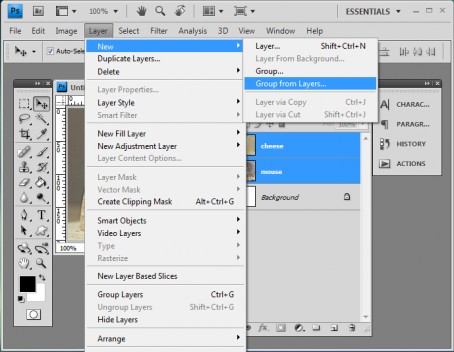 Grey out the invalid/not-available options in the output field.

It is similar to the contextual menus we are so used to. Just make sure the user is aware of the relation between the two combo-boxes. 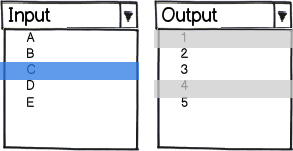 Inthe mockup, C is selected for input and correspondingly, 1 and 4 are disabled in output.

When you grey out the options, they are still visible, but, the user is informed that under the current state (of input selection) these options are not available.

It is a standard practice for contextual menus in all softwares. Here is a screen shot of an illustrator 'Object' menu with most of the options greyed out since there are no objects on which the actions can be performed. 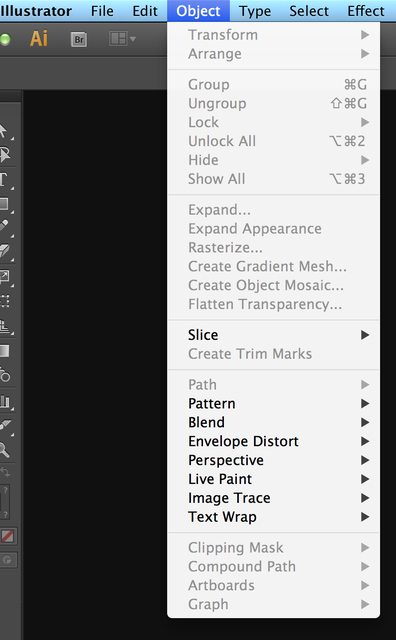 Take a look at Apple On-line Store. You have an endless possibility of different product combinations (HDD, RAM, hardware, software etc). Instead of choosing from number of comboboxes that are cross dependent, user is guided step by step through screens where he can create the product he wants (by combining options) and when it matters he receives a radio button list of finishing possibilities such as amount of RAM of HDD size.

As a next example lets talk about changing profile on a site. We want our user to fill out a form which contains a country of residence and a gender. You know that your site is only available in USA and Canada. So instead of creating two cross dependent combo boxes you can fit it all in a single one (in this case it will be easier for user to fill out one combined combobox instead if two cross dependent):

This is not a silver bullet either - once your system evolves and lets say you expand your market to 100 more countries this solution will be useless (you will end up with 200 item combobox which is a mess). 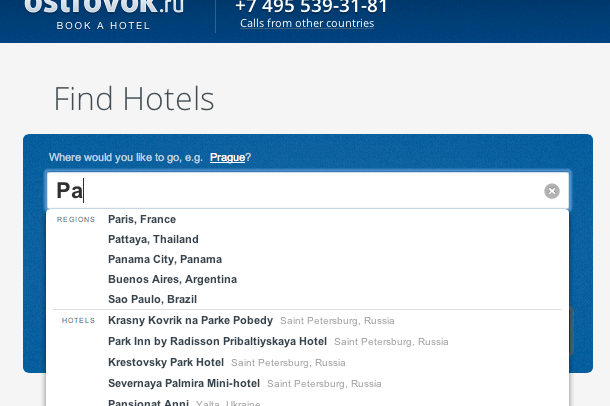 You can start by typing first letter of a country, a city or a hotel and system will bring all the possible combinations. This solution is kinda useless though if you have large lists of items which are not known to user (for example your user is selecting from a list of engine spare parts where parts are named with a serial numbers like AJ-789-HG, AJ-790-HG,... - in this case you will need to introduce a way to distinguish items from each other).

If you have two lists, first one is huge and the second one contains only few options, you can represent first one as a combobox and the second one as a set of buttons, disabling the ones that are inactive for the current selection. Lets say you have a transcoding software in which you chose a codec and a resolution; your lists could look like following:

As you can see there are limitless number of possibilities how to solve the issue you are facing (and as you can see there is no need in such blunt solution as combining comboboxes); the few I listed here as an example are not even the tip of the iceberg. Answering few simple questions like what problem are you trying to solve and what problem is your user trying to solve will help you find the right path.

You can disable one of the combo-box until a selection is made and you can populate the second combo-box.

Combining comboboxes is only a good solution if there is a very limited, static set of items. Say you had three options: Print -> To File, Print -> To Printer, Don't Print. Two comboboxes (print/no, file/printer) is a bit of a waste there. But if there is a large number of possible options a single combobox largely becomes unweildy as you have to list all possible combinations (N2 instead of N), less any invalid combinations. This adds up fast.

I recently put together a "power user" version of this sort of interface; a little uglier but more powerful with a large set of options:

Selecting an item in the first column narrows down the options in the second and third columns: 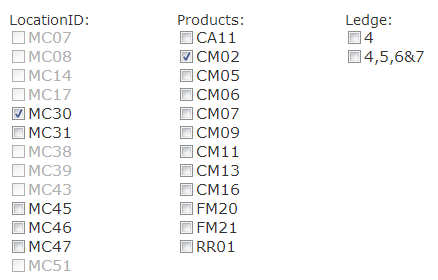 We opted for this checklist solution over combo boxes because:

The problem with combo boxes is, unless your user already knows exactly which combinations are valid, they might not know how box 2 is populated based on box 1. The checkbox solution solves this by visually greying out or removing invalid options, which is more useful in tasks where users don't know what combinations are valid, like a search task.

If at all possible, selecting the input/output should disable invalid options for the output/input. You can asynchronously load the form elements this way to reduce loading times; not useful in the example, but imagine if you had to load a whole second form based on the first input; the larger your possible options, the more impactful an async option can be.

you can see one good example here: http://www.acer.co.in/ac/en/IN/content/drivers , you can consider this option too.

Not the answer you're looking for? Browse other questions tagged website-design usability input combobox or ask your own question.

4
Input control and concept of default values
2
Combobox-clutter... how to solve?
4
Combining email and phone inputs into a single text field
1
How to handle default inputs than can be overruled?
2
Usability problem when using multiple selection combobox
1
Should I combine two values for a single slider?
0
Empty input fields and functional design
3
Timer settings, when to use a combobox or spinbox?
0
What layout to choose for input fields with units?
1
Value input for several dependent ranges