Is shaking a device to refresh an accepted behavior?

I have an app that displays downloaded information that is cached. I could use valuable space to include a button that is used to re-download the information, or I could simply add a "shake the device to refresh" feature.

My question is, do I have to include some instructions about shaking the device to refresh? Or is it such a common feature that users will expect it?

Don't rely on shaking as the only way of selecting any common action. The exception is novelty apps like whips or throwing dice.

For other apps it is poor UX as it:

If you want to have shake to refresh, fine. But you should also include something sane like pull to refresh, or a simple refresh button. 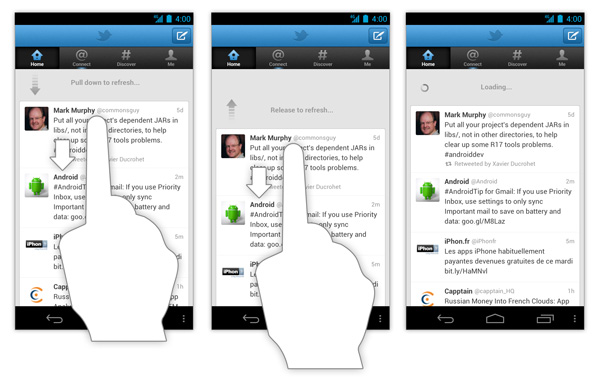 I definitely wouldn't do this; the pull down to refresh mentioned in John's answer is probably the most common gesture. Though if refreshing isn't automatic or is a common action for non-power users I'd personally recommend just sticking with a button; you have a pretty universal "refresh" icon at your disposal and refresh is quite often initiated from a button.

Additionally: shake means undo in iOS. If shake does anything it should probably be Undo (though it's pretty undiscoverable in iOS too so I wouldn't depend on people knowing that either).

I really wouldn't recommend making this particular nonstandard gesture anyway, since it's pretty easy to misenterpret physical movement of any kind as a "shake"; I've occasionally had my ipad tell me Nothing to Undo; I had to do a search to figure out why (I was "shaking" it accidentally). Shaking might even be more often discovered by mistake than intentionally, so I'd definitely warn against it if refreshing might be a "dangerous" action (e.g. it takes away something I was reading!)

Physical gestures can be thought of as short-cuts, it is fine if you have them, but you still need the default way.

Definitely no to shaking. It drives me nuts when my ipad shifts to a new screen or goes to the next news post simply because I tried to re-position the way I'm sitting.

Unless this app is a game that uses directional physics or is an interactive feature, I would avoid using shaking as a refresh at all costs.

As JohnGB described, both Twitter and Facebook use the pull down to refresh content. Which is a great solution since the user can only do this intentionally.

I agree with not relying in the Shake for the refresh feature, the Shake is not very intuitive, it's indeed mostly used for games or when clearly stated but some will people prefer to click than to shake, specially if they are doing other activity like walking, speaking, etc.

Re-think your layout and I am sure you can squeeze a little refresh icon in one corner. Refresh is a well-known feature and you can easily find an icon that will be clear enough for the user.

Aside from the other negative comments about shaking as a gesture, I would also point out that on iOS devices, at least, Apple intended the shake gesture to be used for "Undo", and implements it as such in many of its own core iOS apps. So you may also have the problem that even if a user knows about shaking, it won't do what they expect it to do.

Shaking is very appropriate if your device is an Etch-a-Sketch.

I think "Shaking" as a control is horrible.

Since you're so often on the go with your app (phone/pad) you very easily activate it by mistake. That is a big annoyance for the user.

When you want to do use the shake it's hard to make sure you do it exactly once or if it triggered at all. Shaking also have to drawback of you not able to see the screen while doing the action (since it's moving). Shaking means: Shake, stop and see what happened.

I wouldn't use the control at all, except for maybe as a control in a game.

Not the answer you're looking for? Browse other questions tagged mobile touch-screen gestures refresh or ask your own question.

5
File manager on a mobile device
0
List with links on a touchscreen device
5
How should I get location information in a website or mobile device?
7
Mobile App: Data Update Notification
5
When to show a lock screen (iOS mobile app)
3
Should I retry a manual refresh when network is available?
6
How to effectively communicate to the user that a status will periodically refresh
1
Is it safe to assume that all modern touch devices support motion sensory user input?
0
Is there a reason to have different actions for refreshing a page vs reloading a page with known new content?
0
What to do with loading animation for very short load times?