I am currently going through the process of designing the experience of my first android app for a company I am involved with. Forgive me if some of the terminology is incorrect; coming from a web background, I may not be using the correct language.

Just some info upfront: this application will be purely tablet, as the use case for what these guys want to do, initially at least, doesn't translate to well to a phone.

I have been through the process, sketching, testing on paper, producing higher fidelity wireframes for most the experience but one item is bugging me and I wanted to get a feeler for what other people are doing and if my current approach is in any way a smell.

For this part of the app the view has a picture which can be annotated with detailed notes. A note pointer is placed on top of the image to indicate a place of interest on that image and then a "modal" activity is used to overlay the screen and show a form, from which the note can be entered.

I guess this would be similar to the way a new/reply to email is within the GMail application, where you have a new screen appear above the existing view with its own set of action buttons, but when I read and listen to the best practices they tend to steer away from anything "hovering" and favour new screens, unless I am missing something.

For me, because the note is directly tied to the image, it makes sense that you shouldn't jump to another view simply to enter the details. There are some other experience items coming later that are also forms but with only a couple of fields which again seems overkill to go to a separate view off the screen which is why I went with the overlayed approach.

Is this viable and acceptable, or are there better user experience routes in android I should look at? Forms examples in particular seem to be few and far between so that best practices seem to be hard to nail down.

In Android is acceptable to create a dialog box asking for user input. It's well documented in Android Design Style Guide. 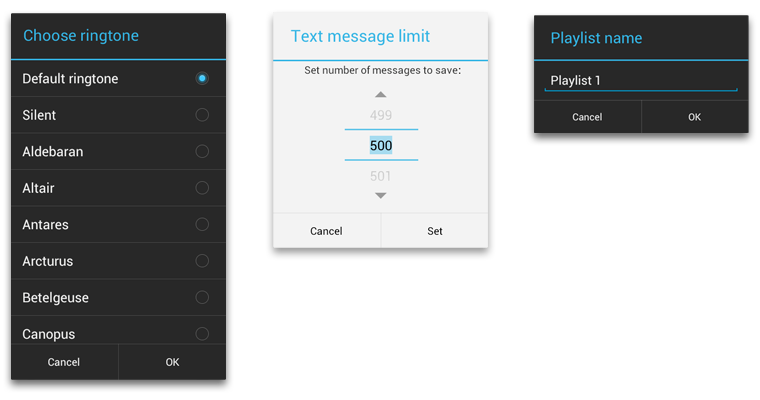 Asking for one item that can be selected or fastly written (like "Playlist name" in the picture above) is common in Android applications.

Despite this, if the note that your app asks for can be long, I would consider using a new screen. This way the user has all the screen space to write the text.

If the user needs to see the image to write his or her description you should provide some way to toggle between text and image, maybe with a thumbnail in the new screen (expandable) or some other kind of interface feature.

7
Best practice for Android form - selection of large range of numbers
2
What should an Android version of a multi-step modal view look like?
2
What are best practices for the "complete using" android dialog?
1
Best practices for hardware keyboard input on tablet
3
What are the UX design considerations when placing all navigation and action controls of an Android app in the Main Action Bar?
3
What is the best approach of presenting a tabular data with search options in android?
1
Proper UX/UI design for image upload and form on android
1
What Android GUI design patterns are suited for multi-stage process with a separate screen for each stage?
1
How should an Android permission that looks fishy for the app but without which it's impossible to obtain a certain needed behavior be handled?