What UI Should I Use?

The user is a construction sub-contractor. Each user specializes in something like welding or plumbing or windows, etc... Now, these things they specialize in are formally defined in an industry standard hierarchical structure. The hierarchy has 5 levels and contains thousands of entries.

I want the user to be able to specify their specialties from this structure, but I think a tree-view with checkboxes and thousands of items will be horrible from a UX perspective, especially on mobile devices. What I am thinking is more along the lines of a textbox with "auto complete" so that when they start typing: "weld.." a dropdown appears with all of the specialties beginning with "weld". If they select a higher level specialty then all contained sub specialties are selected too.

Please advise on your suggestions for the best user experience here and keep in mind a mobile-first / responsive design.

While a user will be quite familiar with their skills, he or she may not be as familiar with the entire hierarchy. This makes it hard to find a skill at level 5 going down a tree like structure. I think you have the right idea of using a search interface with autocomplete/suggestions based on partial input. I would suggest not trying to represent the structure of these skills in an iPhone interface. Instead, present the results in a flat list, but do show their level in the hierarchy.

You could further support the numbers' meaning in terms of hierarchy by presenting them in a way that we naturally associate with hierarchical structures. For instance, the top level could be gold, second silver, etc. That doesn't go down to 5, but it's a start.

In this mockup, checking the "welding superhero" box would also mark the "welding for soccer moms" box if that's on the same branch in the hierarchy. 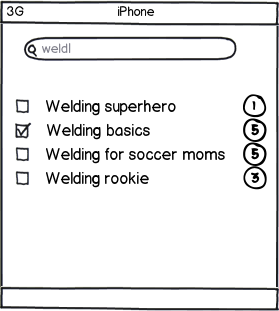 Not the answer you're looking for? Browse other questions tagged gui-design ux-field responsive-design or ask your own question.

1
What UI design should I use for a smartphone app?
26
Why is that the most popular sites don't use responsive design (and choose to use a mobile version instead)?
1
Should I use multiple dropdown menus in mobile design?
2
Improve design for master-detail interface
7
Why should I use em, and not % for fonts?
4
Should I tell what the function is or not?
0
Use of Max-Width In Fluid (Or Responsive) Web Design
2
What button terminology should I use for filtering?