It is a very simple question, but it has been bothering me for quite some time: when creating an application, should the help menu (in the menu bar) be called "?" or "Help"?

I can see a few advantages for "?": it leaves some room to associate the character "H" to another menu (with Alt) and is quite easy to recognize. But I think there may be some other pros and cons in this choice.

NOTE: Some of the answers discuss about internationalization and shortcuts, thus about how ? may not exist in some languages. Since I am French, I will use that language as an example (sorry if you prefere your examples in Chinese). For the same reason, feel free to edit any mistake you find in my English.

However, as said, Alt shortcuts are often secondary and thus these points do not invalidate what was already said in the answers.

NOTE 2: For the sake of completeness, we could also add the answer we simply don't care since it is a "positional" menu (always the last in the menu bar) and, generally speaking, users will know where to find it without even having to ask.

NOTE 3: One last point which not appear in the answers but appeared in some comments, and I think it is interesting to have it highlighted here. Alt+Shift+/ may be quite long to type, but one generally does not care since the key F1 should be a shorcut to open the hemp (even though it sometimes opens the "About" dialog).

A question mark ? doesn't represent 'help'. It represents a question in general, or a question about more information on a specific point. Some apps and websites have used it for contextual help as it is cleaner for that.

If you want a menu option for a help menu, call it "help". This has become so entrenched that the name for it is a "help menu". Alternatively, if it's a set of frequently asked questions, call it 'FAQ'.

Additionally, a ? would not hold in many languages, so you would have to come up with a different symbol when internationalising your app. Finding the common name for a 'help' menu would be a lot easier in other languages.

However, if you really need a symbol for the help menu, I would use a lifebuoy icon, which more globally represents help. 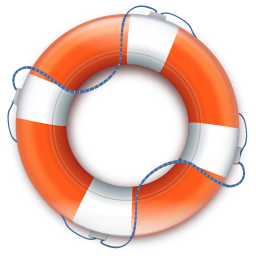 If it's the help menu, please just call it that way:

Alt- keyboard combinations should be secondary to having an easily understandable name for the menu option. I don't believe they're that important anymore to most users (they'll be clicking anyway, which re-inforces my third point) and they've always had that problem of a letter already being taken. You should have them, but you shouldn't use ? for the help menu just to free up the Alt-H combination. Also, Alt-H should probably be help (at least, English Windows and Internet Explorer have the help menu under Alt-H): it's important to match the expectations of power users when it comes to keyboard combinations. Anyone who has ever used Textpad on Windows, or uses both Illustrator and Inkscape, will probably know how annoying mismatches can be. The only way those combinations are discoverable is if they match other products that someone might use.

Or using Command Prompt adding a question mark after a command:

So if you were to implement a help menu in a Windows environment - you can most definitely use a question mark, but to make it even more clear - let it be accompanied by the text Help as well.

Since this appears to be a question about desktop applications, the answer is simple: call it what the appropriate style guide (whether for Windows or OS X) tells you it should be called. (Which, in both those cases, is "Help", or the localised equivalent.)

Defintely "Help" - being as straightforward as possible will get most clicks on the help. The question mark leaves some room for ambiguity and won't necessarily be clear to all users.

It's simple. Be consistent. A menu contains words. There is no resason to deviate from that.

ONe of the main reason is the french keyboard: if you want to press ?, you have to shift. So, if the help menu is accessible through "?", I have to press to many keys (Alt + Shift + ?)...

24
Where should the "preferences" item go in a desktop application?
5
Alternatives to Menu + Toolbar or Ribbon
3
Pattern for desktop responsive menu and visibility of selection
4
Change text on disabled menu entries
3
iTunes 12 application menu design concept
0
Does avoiding the hamburger menu on Android break a core platform UI pattern?
46
Should we use the 3x3 9-dots icon as an apps menu?
1
Best way to show scrolling menu?
2
Intranet static menu: Below or above page banner?
0
How to decide to what should go in more options menu?