Group of controls depending on value of combo box

I thought of using a group box combined with a combo box, like so: 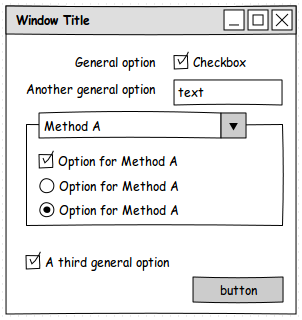 However, I believe this is not considered to be good practice, judging from the lack of such a control in the Qt Toolbox, and from the statement on the Microsoft Dev Center that one shouldn't put controls in group box labels. On that page, they recommend to use tabs instead: 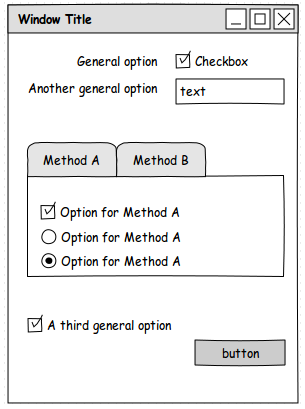 But, again, this doesn't seem to be the right approach: In my understanding, tabs should be used to switch between different independent views, and not to make a selection. Will it be clear enough to users that selecting one of the tabs also makes the choice of whether "Method A" or "Method B" will be used? Is there a different commonly used approach to this problem that I've missed?

Your situation is outside of the norm, so don't expect a guide to cover your situation exactly. Look for a similar principle and apply your judgement.

I would argue that you should put the control in a group label (as per your first example) to clearly indicate that the settings are related to the control. Microsoft's guidelines assume that the controls aren't conditional, so they have no need to have grouping. However, they provide for an exception case which would apply to your situation:

With regards to the exception mentioned by JohnGB the use of radio buttons (one per method) as a group box label to activate/deactivate and control the settings accordingly seems to be the standard. It's also a good idea to show the - although deactivated - options the user could access when selecting the other method/radio button.

Not the answer you're looking for? Browse other questions tagged usability gui-design controls combobox or ask your own question.

1
Desktop GUI loading slow
13
Results of combobox selection
7
Multiple Items Settings
12
Where did combo box/drop-down lists come from?
3
Combo Box/Dropdown control that allows new values
1
What combo box button is preferable?
3
When to use combo-box vs dropdown?
2
Cross reference between tabs, a bad practice?
1
end selection best practice
1
How to choose the best type of controls to use in a toolbar?