Which is better option 'School', 'College' or any other?

I have used the school field name for both school and college on my website, but I think 'School' and 'College' have different meanings. Can anyone suggest a more appropriate option? 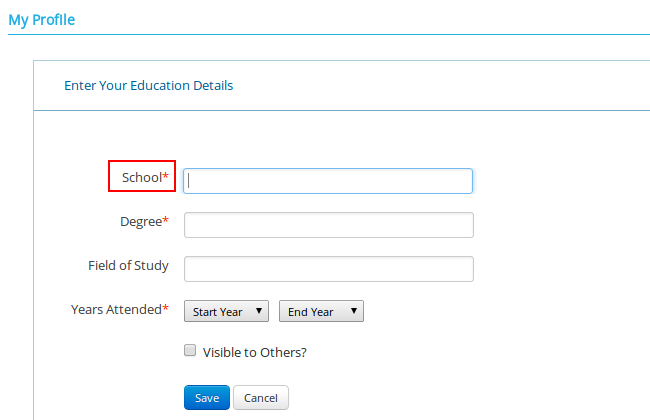 Take a step back and think about what you want to know. It's where they studied, what their qualification is, and what they studied.

Internationally, there is a surprising amount of variation here with many countries using the same words but have different meanings. So the result is that you should stick to generic terms that encompass all the options.

It depends very much on your target audience. For example in the UK "School", "College" and "University" are three different kinds of educational institution and you can only get degrees at the latter.

I'd suggest something more generic like "Name of institution".

But more likely if you can't determine the system beforehand, then be very generic and use a term like institution (suggested in the other answers). To improve the user experience even further try to identify the institution name and provide relevant options for the other input fields (for example: pre populate the degree / field of study fields and create a searchable dropdown).

I have encountered a problem when I speak to American students in UK. They say they go to school, but by that they mean university.

Maybe the best thing to do is to create a dropdown where the user would be able to select: School, College, University, Polytechnic maybe some other ones. Then using progressive disclosure display the rest/appropriate of the fields.

Also allow adding extra education information, so if the user would want to enter both secondary school and higher education.

It all depends how much information is required to use your service.

I think, as per other answers, the headings should change to reflect a far more generic concept:

Might be better. You could put examples for the qualification ( or qualification obtained ) if needed. It is definitely worth while allowing for multiple entries here - for example, I have studied at two different universities for different degrees. This is not uncommon for well educated people (and me).

The problem you have with defining it as a school or college is that these terms vary widely, and have conflicting meanings in different countries. So, for example, if i had been to Cambridge University in the UK, "college" would be the college within that university, which is not what you want to capture. Similarly, at the university I attended, "school" was the department, so once again you would be getting wrong data. In both these cases, institution would work.

"Area of study" is rather vague too. It might be enough, but if I put "Biology", that would not necessarily help, whereas a course title should provide, potentially, a little more insight: "Biology with microbiology" clarifies it better. However, this might depend on your users.

The caption, Educational Institution suits all the possible options like school, college or university

Not the answer you're looking for? Browse other questions tagged usability gui-design user-behavior ux-field or ask your own question.

3
GUI for a add-and-combine workflow?
3
Name and Company - One field or Two?
3
“About me” -field usage in web app
4
If a user does not want my application to use his title, should I give him a checkbox for this setting?
9
What do you think of gauges to display information in web dashboards?
1
Better option to warn user about an existing name
0
usability testing and target group
0
How to include a visual for gender option “other” without being offensive?
0
Which of these Tags are better