I am making an idea management system using Ruby on Rails and Twitter Bootstrap. This is a static mockup I have created. 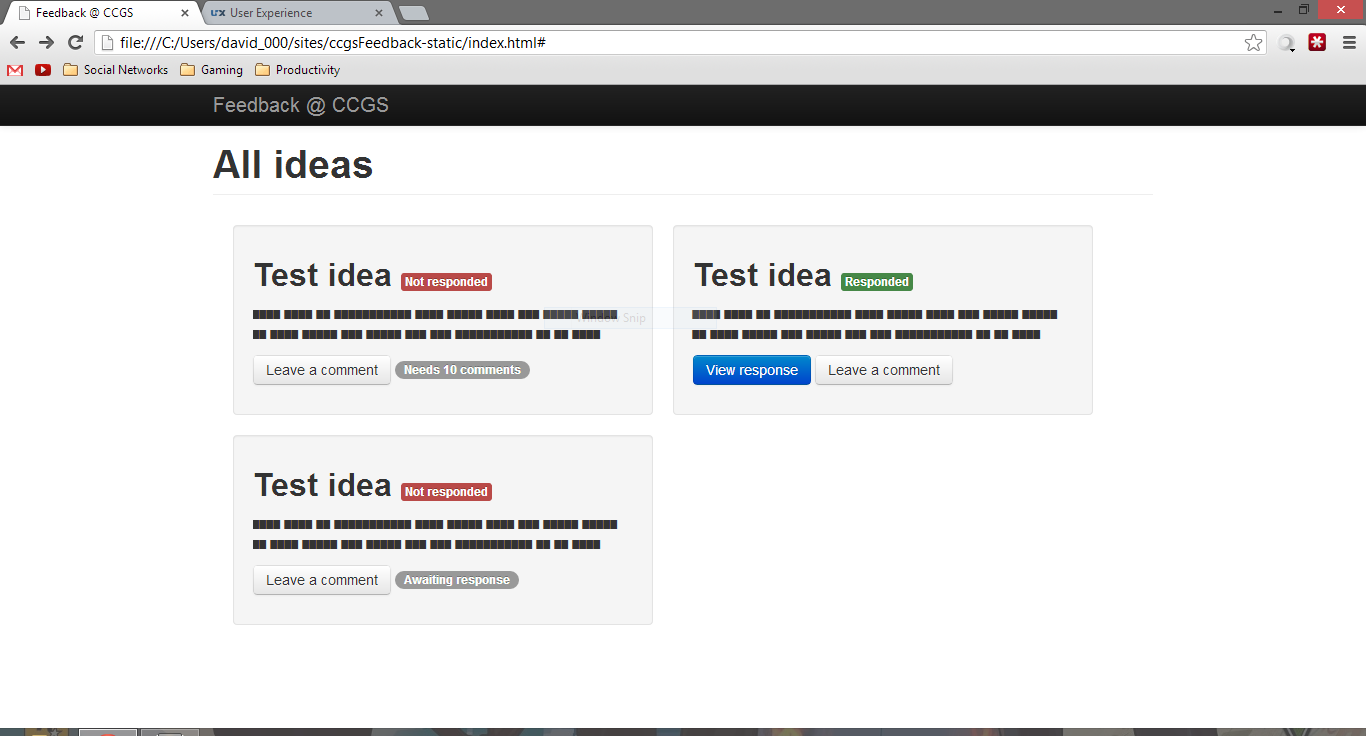 Here is how the system is supposed to work 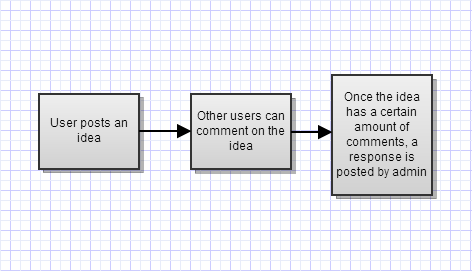 The comments will be managed by Disqus to prevent spam and to assist with moderation. If the idea receives spam comments, they will be disabled for that particular idea. Comments will be limited after there has been an official response, and will eventually be disabled.

From a user perspective, is this a good system, or is it time to go back to the drawing board?

Edit: This is a feedback system for a school so that's why I mentioned all the comment moderation

Edit 2: Here is a new mockup

As far as the visual layout, the two-column layout for ideas isn't ideal. Use a single column of ideas taking up 3/5 of the X-space and the remaining 2/5 can be metadata about the idea like number of comments, if there's an official response, tags, etc.

Something we do in the interface where we invite people to provide ideas for our product is to, before the field for them to explain their solution, have a field for the user to describe the problem they are trying to solve. Then, their solution becomes a jumping off point for other users to iterate on different possible solutions by posting further comment, as well as upvote and add feedback to other solutions.

Also asking the user to actually describe the problem helps you to know the purpose behind the solution they provide so that you can also iterate design concepts to maybe solve the real problem in a way that is best for your entire user base.

It sounds like an exciting project. I'm familiar with this class of tools and have just a few thoughts.

Some of your initial instincts are likely spot on. The number of "views" or comments, or for that matter votes, bookmarks, alerts, follows, etc. are all measures of "activity" which implies interest, which implies the value of the idea versus other ideas. The better idea management systems have an algorithm measuring activity as well as votes to determine idea "promotion". Limiting the number of comments is also reasonable in this sense: Challenges should have finite periods of time; a beginning and an end.

Which brings up the notion of Challenges. A general idea box has the tendency to engender incremental innovation (doing things better). Most organizations are also hoping for breakthrough innovations (doing things differently) and that is almost always the result of a call to action of some sort ("Help us design the school of the future!").

There are tons of attributes that could make this better, but I understand you're working within a finite environment (there's a reason those systems cost so much money, they have 25 developers workings a dozen years adding features). But one of the most important is acknowledging contributions. You don't have to give away iPods or T-Shirts or cars to get people to contribute, but if you acknowledge their contribution they'll keep coming back. So a tote board of highest contributors, an email ("thank you for your idea", "someone commented on your idea", "Your idea has been promoted; selected") will keep folks coming back.

2
Where to find design patterns for product management web apps?
4
Should I allow users to edit replies in a ticketing system?
4
Voting System - Which Symbols to use
2
Which term seems more appropriate for a playback system, “player” or “device”?
0
examples of user feedback for evaluation of other users' answers
24
0 to 10 rating system alternative
1
Displaying System Generated Placeholder
3
Inventory system with multiple quantity values
0
How can we validate this idea for a restaurant/bar app?