Original design choice of back and forward directions?

There are numerous of evidence around us where forward and backward directions are predetermined. As if they are a conscious choice we all know. At least this in true in left-to-right reading countries, which is the first example.

We read and write from left to right, and going backward in a text would be to move to the left. Moving forward in a text is the opposite direction (naturally) moving right.

The same pattern is shown on e-mailing systems (and icons). Replying to a message is clear to us since the arrow point to the left means "back to sender" and an arrow pointing right means "forward to another user". GMail, Microsoft Outlook and icon search for reply and forward give the same result. Left is going back - right is moving forward. 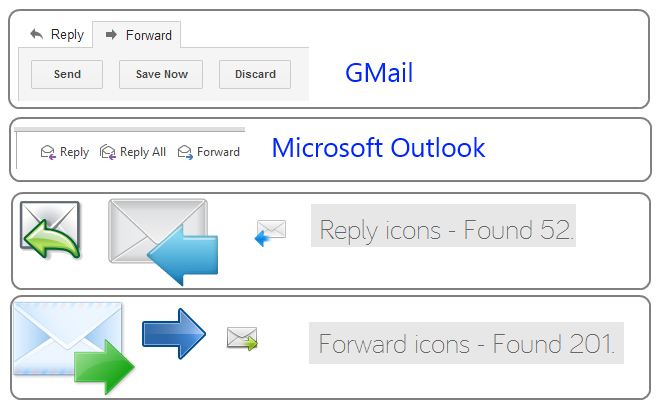 The third example is the media player control. Again left for back and right for moving forward. 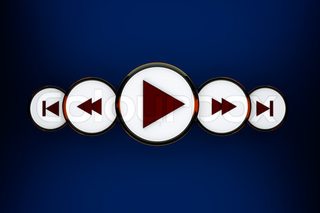 But where did it all start in the design of buttons and controls representing backward (reply) and forward? Was it a concious design choice in User Experience Design to make these back and forward directions - or was it just coincidence?

A conversation happens in time.

Person 1 (P1) starts a conversation, the second person (P2) replies to what the first said (in the past) and then asks a third person (P3) what they think (in the future): 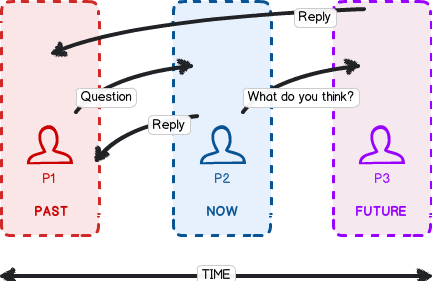 When Person 2 replies, they are replying to something that was said in the past.

When Person 2 asks (forwards) the original question to the third person (P3), they are creating a new point in the timeline by asking for a reply that P3 may make in the future.

Person 3's reply is going to reference everything that has been said to date, which on a timeline would be to the left.

Thinking of the communication chain chronologically, it makes sense to have "reply" represented by an arrow pointing to the left (past) and "forward" pointing to the right (future).

This model is supported by the media player example, as the controls indicate whether you would like to move to a point in time that is before or after the current position.

Representing time left-to-right (LR), however, is culturally specific to the direction of written language.

While time is an abstract concept, studies have shown that people tend to use spacial concepts to represent time ("spatial timelines, clocks, sundials, hourglasses, and calendars"). These representations, even if conceptual, are always within the context of written language:

In three studies, we find that speakers of different languages organize the domain of time differently. In both explicit and implicit measures, English speakers (who read from left to right) associate earlier events with the left side of space, while Hebrew speakers (who read from right to left) associate earlier events with the right side. Our results demonstrate that people automatically access culturally specific spatial representations when reasoning about time even in entirely nonlinguistic contexts. Written languages appear to organize their readers’ attention in a vector from where text usually begins to where it usually ends.

More broadly, it seems that writing system orientation is an idiosyncratic linguistic characteristic that can have an impact on our cognitive system in general, like other linguistic features that have relativistic effects. The details of a language – in this case an apparently superficial feature of how people in a given culture interact with its written form, seems to shape the way that people think about something totally unrelated.

Because a conversation is a chronological chain where the subject of conversation is either in the past or requests a response which has not yet occurred, and because modern technology is heavily influenced by Western culture (primarily English language), the representation of time follows the left-to-right pattern dominant in that culture.

The original media controls were developed by a Swedish engineer named Philip Olsson while working in Japan. Both modern Japanese and Swedish read from left to right, as do most languages. So left was used to indicated backwards, and right to indicate forwards.

I believe the media directional are descended from cassette tape players, in which the arrows point to the direction the tape would move over the head. Video tape players followed this convention (it would have been confusing not to), later compact disc players adopted the arrow language, and now those arrow symbols are well engrained in the electronic users world.

The email directional I'd guess are just evidence of the left-to-right reading bias of earlier computing systems, and not related to media controls.

Not the answer you're looking for? Browse other questions tagged buttons design user-centered-design writing-direction original or ask your own question.

24
Is the mental model of time advancing to the right in charts globally accepted?
12
Volume controls: Why is left down and right up?
9
Is there a standard order for `Stop`, `Play`, `Back`, and `Forward` buttons?
5
Right to left graph labels for right-to-left languages

18
Is there a recommended location for a submit button in relation to a cancel on the web?
2
Dialog Button Orientation
87
Why is the “Record” icon always round and usually red?
1
How can I display a tri-state button that displays the current state?
9
Is there a standard order for `Stop`, `Play`, `Back`, and `Forward` buttons?
1
What is a term users can understand when leaving Edit mode?
6
Does the position of icons in buttons affect the user?
2
Should the sun rise from left or right side?
0
iOS: Delete/Upload button position
2
What is difference between design from product and design from experience?