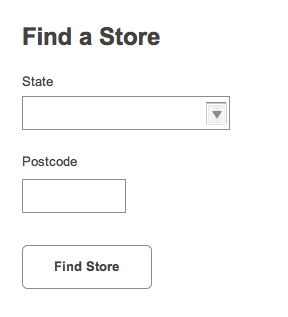 I'm designing a website, which has store locator functionality. I live in Australia, which has 7 states.

Some users may not know their postcode by heart, and may find it easier to just select their state and select postcodes from a dropdown list.

Is it wise to give the user the option of selecting their state from a dropdown list, as well as the option to input their postcode, or should the user be forced to enter a postcode?

The user should not be forced to enter a postcode. There are valid cases for wanting to find a nearby store but not knowing the postcode. For example:

If your list of stores is long, only allowing the user to search on state would place a high cognitive load on the user to scan the list to find the store that is closest to them. In the case where I'm visiting from elsewhere, if there isn't a store in the city that I'm in, I might not know the area well enough to be able to figure out which is the closest store. Given the size of Western Australia, I'd be especially annoyed to have to open up a map application and look up each individual city or suburb to figure out which one is nearest.

I think that Target has a pretty good store locator. They have a single box wherein I can enter either my city and state, or my postcode (ZIP code, to Americans). Since Target stores might have different departments, they also allow me to optionally specify that I want a Target with a specific department. This might or might not be relevant for you; in the case of Target, it's a useful way to get meaningful results. Their store locator allows you to just enter a city, in which case it makes a guess, but they don't do a good job of showing alternate interpretations (Portland, Oregon vs Portland, Maine, for example). 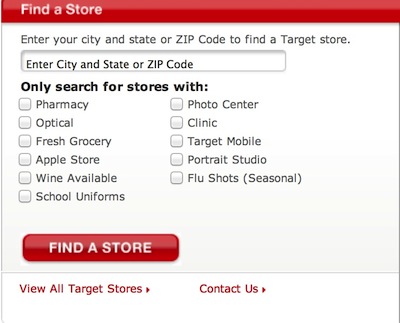 You could just have one input field that handles city, state, or post code as is pretty common with these things.

In my experience, the easiest to use have had (or would have):

If the combination of #1 and #2 is ambiguous (e.g. just entering suburb of "Richmond" without a state), the next page (or ajax or whatever) offers nearest matching suggestions e.g.

Why not ask them to select a city? You could then return the closest results to the city entered?

State and postcode are still acceptable solutions, but less user friendly. Maybe you could give them different options?

Ideally you want to be able to cater for as many users as possible, but one problem with providing too many options is that they may put in their post code and then come up with no results, and then they would be forced to do another search. My suggestion is to just provide an input that allows them to specify a location, but label is as the nearest city or postcode and return a larger set of results and let them narrow it down further. I think it would depend on the type of store and whether they have a lot of locations.

Use may use combination of two mental models. Let the users type and offer auto-complete for the possibilities AND also let them use the "search" button which should again show results in the drop-down to select from.

In the mock-up, I have purposefully avoided the use of "Search" in the label as it feels laborious (considering multiple actions required to search, spot and selecting one result) but if your control is offering this feature silently, that would do the job. 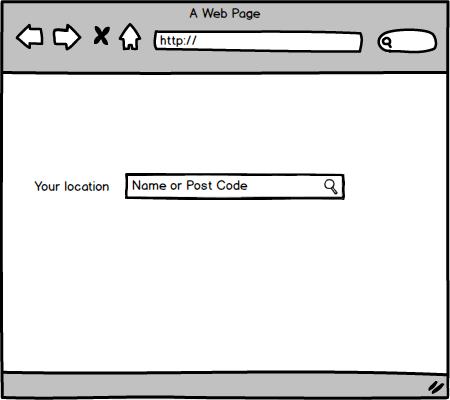 For your specific case (i.e. 7 states), something like this would be more attractive. Basically showing a map with a hover highlight and a selection highlight. 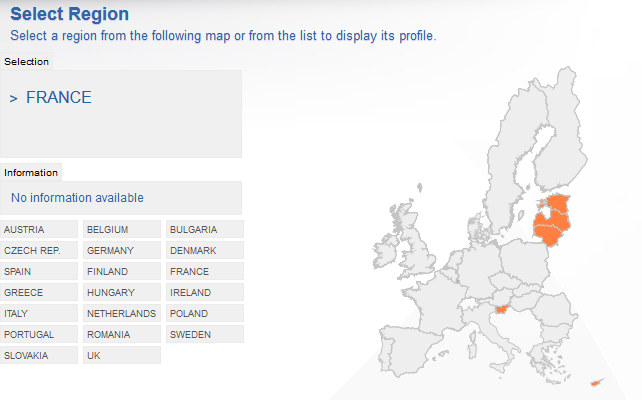 Furthermore since this is a store locator, the map can also include the POI for each store already, providing at a glance an overview and option to zoom to get where you need. see example here

Alternative would be to just show all the state names at once, and the same as above ( a hover & selection highlight).

However the earlier answers about combining all of them are valid, and easier to implement.

Friendlyiest solution is to only have a single 'smart' form field.

Have default text in there indicating they can enter any of those peices of information.

Then provide results to the degree of specificity of the info they entered.

Not the answer you're looking for? Browse other questions tagged search drop-down-list textbox or ask your own question.

6
Order of 'Country' and 'State' fields in Registration forms
4
Address list following a postcode search, should a drop down list or radio buttons be used?
2
Adding an item to a pop up list
2
Android Spinner with many items?
2
add your own entry to a select list
2
Lots of buttons with user input if none are applicable
3
What is the recommended height of a dropdown menu that has an internal scrollbar on desktop?
3
Switching selection in a multiselect dropdown from all to the one user is hovering on