This is a discussion of how to design a video website's UI based on a cell phone's features. I personally think that the UI should be based solely on the phone's screen size. A co-worker thinks that phones with more features deserve a more complex UI.

Consider our current design on the iPhone, which the co-worker judges as a weak phone. The channel listing is very simple. You tap a channel to play it full screen. Everything is similar to Youtube's app. 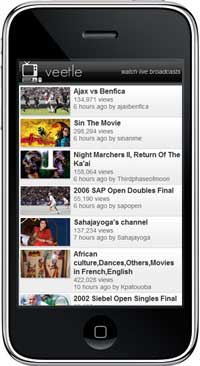 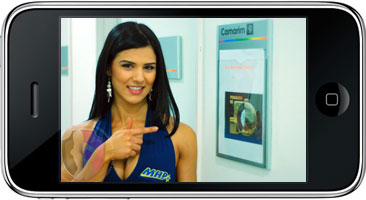 The co-worker wants to extend our website to Android phones, which he judges as a phone with superior features. Because Android phones have a multi-threaded operating system, this allows one to play videos inline rather than full screen. The co-worker would like to have the video playing inline with the channel list on the right. This would allow for a a faster channel surfing experience - you can change the channel without stopping the current channel.

The bottom line question is: should video always play fullscreen on cell phones, even if there may be features on the particular phone to allow it to play inline? And by phone, I mean a normal hand sized phone, not any crazy gargantuan phones that are coming out these days.

I don't know how of a background in programming you have, but you might be letting your co-worker throw some (unnecessary) big words at you. Fact: iOS is also multithreading and multitasking, since version 1.0 circa 2007. So is Windows Phone 7. So was Windows Mobile 6.5 before it. And 6, and 5, and 4 before it. It's not a big deal and hasn't been for over a decade.

Whether you can play a video in-line or not has nothing to do with whether the operating system is multi-threaded. It's purely a question of user experience.

The way I see it, screen size should be the only determinant on how video is presented. Playing video in-line on a tablet makes sense because you have spare screen real estate. Doing so on a mobile phone does not sense.

Whether to use overview beside detail (OBD) or fullscreen content depends greatly on the user's need. Do they really need to see the playing video while changing channels? What additional value does it bring to see them both at once? Does the channel listing have enough screen real estate to actually be useful on a small screen? Is there still a way to view the video fullscreen? It's never a good reason to do something just while it's possible. At least not UI-wise.

As a side note, in LTR cultures the control flow should normally go from left to right, so the channel listing should be on the left, controlling the contents of the video player on the right. (E.g. on Youtube they got this backwards but I blame it on the interpretation that the list of related videos on the right isn't a "content browser" but only "exit links" to other videos...)

Not the answer you're looking for? Browse other questions tagged android iphone video mobile or ask your own question.

6
One charger for all cell phones
1
What should an Android version of a multi-step modal view look like?
2
Video in Email - Triangular Play Button or "Play Video" Button?
6
How to determine if disregarding system settings for orientation is bad UX?
2
Video controls on full screen landing page video
2
Is it a good idea to play a [mute] video in the splash screen
1
Should video auto-play on preview screen?
1
Video Triangle Play on Thumbnail Image - Dated UX?
2
Video play button on overlay images