Should the current likes counter be inside the Like button?

I noticed that Facebook, Instagram and other well designed apps separate the Like and Comment buttons from their counts. Any ideas why they do not put the counter inside the button? Maybe have a split button to vote or to see who voted?

To may people, combining Likes count and Like button would seem natural. 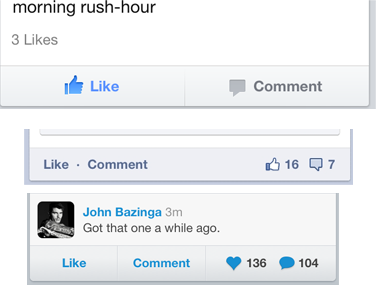 In my opinion there are three main reasons for that.

First thing is that there are two different on-click (or: on-tap) functionalities of these:

There is a different importance for the user between seeing something and triggering a change (actively liking or leaving a comment). Representing the first with a bare text and the second with a button reflects it quite well.

Secondly, both "Like" and "Comment" have double meanings: one is verbal ("to like", "to comment"), and the other is substantival ("a like", which is a neologism, and "a comment"). Grouping these two meanings would lead to mixing these contexts, so it would not be good for the UX. If you do so, you would have to visually distinguish the two meanings:

The other reason may be the tap zones. If you group both verbal and substantival, you would have to make sure it's easy for an user to click/tap the one he wants (due to the different importance). This would result in a necessity of creating quite big click/tap zones for checking the number of likes/comments (if they were left small, there would be a risk of triggering the actual like/comment, inconvenient for the users). This necessity would lead to a significant waste of space, as extending the numbers would eat up space now used for the buttons. Being given a limited width (especially on mobile) it is therefore good to split buttons from numbers, which allows for quite big buttons and quite separated "number of" texts (grouped together, as misclicking/mistapping does not actually trigger any important action from the user).

Seem like the designers felt that grouping buttons and counters was more important than likes and comment groups.

This could also be a localization issue. "Like" and "Comment" are fairly short words in English but do need surprising amount of space in some languages. Having the numbers in a separate place from the actual localizable strings would mean it's easier to guarantee everything works out in most languages.

Some reasons I can find for this:

Not the answer you're looking for? Browse other questions tagged usability buttons or ask your own question.

3
Placement of edit link beside long title?
3
Edit button inside apps
1
Comments at the heart of a document
3
Are buttons perceived as rectangles first?
0
How to represent this kind of data (Daily food menu)
0
Delayed Concurrency on Social Media sites?
2
Print-Button on expose
1
Should buttons appear on a menu bar?
4
Financial planning site -- show a negative balance in italic type?
20
Close button position: corner or inside?