Why do most websites use a white background? [closed]

Ask Question
Asked 8 years, 2 months ago
Active 2 years, 3 months ago
Viewed 44k times
26
It's difficult to tell what is being asked here. This question is ambiguous, vague, incomplete, overly broad, or rhetorical and cannot be reasonably answered in its current form. For help clarifying this question so that it can be reopened, visit the help center.
Closed 8 years ago.

Apart from the ui being neat and simple, Is there any other reason why every major website uses a white background with very few colors?

There are two main factors that influence the fact that most websites use a light background, the first is the power of defaults and the second is readability.

The second reason is that dark text on light backgrounds is better for readability, and this is a very controversial topic.

Assuming that the contrast is right and equivalent (W3C Accessibility Guidelines on contrast) for both light-on-dark and dark-on-light, it seems that for readability purposes the best thing is dark text over light backgrounds:

You should avoid using white text on a dark background when displaying paragraph text to make it easier from them to read. Forcing users to fixate on the white text for a long time can strain the user’s eyes. This is because white stimulates all three types of color sensitive visual receptors in the human eye in nearly equal amounts.

White also reflects all wavelengths of light. Because the words and letters in paragraph text are compact and close together, when white text reflects light, the reflected light scatters and runs into neighboring words and letters.

Here is also another source that collected some studies on the topic:

And here is another study on the topic: Letter identification performance is better for negative contrast than positive contrast.

However, some people prefer the opposite (although I didn't find any evidence), ie. light text over dark background when they're reading in dark rooms, in fact, most ebook readers have the two options: 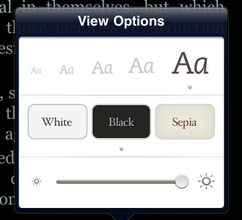 To let the content stand out, you want a neutral background to build on. If you use to much colors and color patterns, the background seems more important than the content and structure.

In most cases white is seen as a neutral background color and other colors, even when used in smaller proportion, are the colors that convey the most meaning in a design. Use white to signify cleanliness or purity or softness.

White is color at its most complete and pure, the color of perfection. The color meaning of white is purity, innocence, wholeness and completion.

In color psychology white is the color of new beginnings, wiping the slate clean, so to speak. It is the blank canvas waiting to be written upon. While white isn't stimulating to the senses, it opens the way for the creation of anything the mind can conceive.

Simply put I think its just harder and costs more to design a site in dark colours than white colours.

Firstly as pointed out in other answers contrast is king when it comes to readability and black on white is easier to read rather than white on black, but not that much easier. I read books on my Android phone with white text on a black background and have no issues reading it.

So some niche sites that want to stand out will use a dark background but all major sites are compelled to use a white background.

Not the answer you're looking for? Browse other questions tagged background or ask your own question.