Why would users of an Arabic interface show an F pattern in eye tracking tests?

Why does eye tracking on the Arabic version of my interface show an F-pattern only 50% of the time? I had assumed it would show a reversed F-pattern because Arabic people read right to left.

It's going to be really hard to respond to this question unless we can see a screenshot of what your interface or site currently looks like. However here are some reasons as to why you are not getting a 100% right to left F shaped pattern for your site:

Our usability studies in countries that read right-to-left found the same general pattern of increased attention to a line's beginning. Obviously, in those languages, the beginning would be the right side of the text. Even so, we wouldn't necessarily find a mirror image of the above chart from eyetracking studies carried out on, say, Arabic or Hebrew sites.

The reason is that sites in right-to-left languages don't always employ a mirror image of traditional left-to-right layouts. See, for example, the following screenshots from the Dubai newspaper Emarat Al Youm and the Israeli newspaper Haaretz : 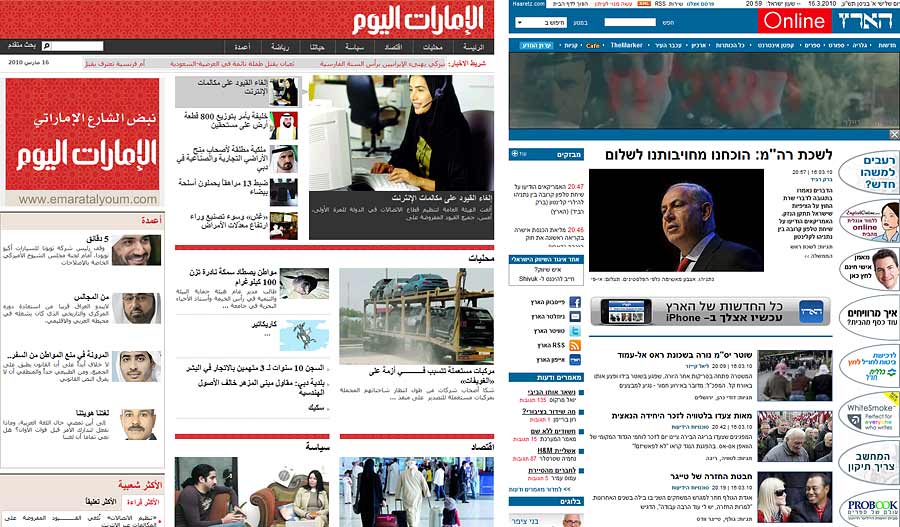 Emarat Al Youm is a true right-justified site. In contrast, Haaretz uses right-justified text, but still has a navigation bar to the left. So, an eyetracking study's results for Haaretz might be more complex than simply flipping the pattern we see on English-language sites.

Another interesting findings was that irrespective of the visual patterns or attention, visual attention of all the subjects was directed to the image of Masjid-u-Nabawiwhich can be interpreted as attention influenced by the cultural impact of the object of interest on the users. 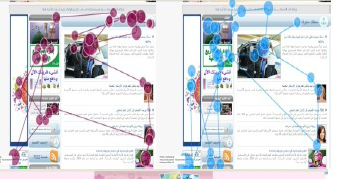 Visual Patterns also showed how white spaces aided the users in reading the text with least hindrance of the multimedia content. Figure 8 clearly shows a smoothreading pattern within areas of content and longer sac-cades across white space that separates content areas without any distractions in the reading 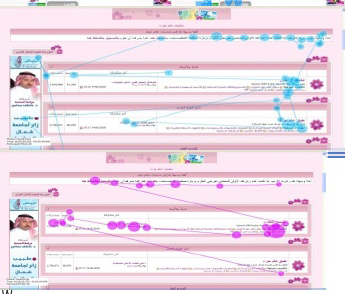 In a right-to-left layout, it was interesting to find z-shaped patterns in which viewers start with text then examine the multimedia content at points in time in which the audio accompanying the video or animation or video emphasizes a point with tone. Other instances of switching between text and multimedia would be when animation is detected by foveal vision of viewers. Patterns showing brief examinations of these areas are in line with the findings of [16] in which they have shown that viewers struggle to ignore inter-face elements that are animated and consequently exhibit increased cognitive effort in concentrating on the text which is exhibited by intense fixation.

Visual patterns of triangular shapes were observed across the eLearning interface. As shown in Figure 2 & 3 the subject’s attention alternated between the navigation,text and multimedia

Another visual patterns found in the Arabic interfaces are zig-zag patterns. In this patterns, the reader starts from the right and continue to the left then a little down and back to the right before starting the another horizontal movement to the left again, which may be because of the difference in the direction of Arabic scripts. Figure 9 shows the zig-zag visual pattern observed in the advertising study

All of this said, Philip's answer is also spot on since there might be a number of users who are not right to left language users and hence might start their standard scanning pattern from left to right with a standard F shaped pattern.

The vast majority of websites are designed for left-to-right (LTR) languages, and so the layout of these is such that an F pattern is most common.

When websites localise for a right-to-left (RTL) language, they often only change the text areas, and not the layout of the entire site.

The result is that even people that read in a RTL language (such as Arabic or Hebrew), many of the sites they are used to, re-enforce a F pattern due to their LTR origins.

In addition, many RTL language speakers also spend a fair amount of time reading sites in other LTR languages (such as French or English), and this re-enforces the F pattern even more.

It could be you've got some people in the sample who can read English and therefore spend a fair amount of time starting Top Left.

Not the answer you're looking for? Browse other questions tagged language localization eye-tracking writing-direction or ask your own question.

30
What UI/UX patterns do not “translate” well when localized to other languages?

3
Mirror top navigation order between left to right-languages and right to left-languages?
3
Eye Travel vs. Touchability on Mobile
5
What's the rationale behind forcing users into one of their local languages?
16
Do Arabic web browsers have the back/forward buttons reversed?
1
Do mobile and touch gestures impact bidirectional screen convention? Any UX research?
1
UI to “change user interface language”?
3
Are eye tracking tools effective for user tests?
2
Force RTL interface orientation or let the user decide?