When to use reversed/mirror arrow cursor?

Is there an established pattern for when to use a reversed (right-pointing) arrow? I most frequently notice it in Outlook on part--but not all--of messages in my inbox:

My Google-fu failed at finding a guideline in either the Apple or Microsoft UI HIGs.

(This is irrespective of any system-wide settings based on left/right handedness.)

You can use it to indicate that the action of the mouse click will affect the elements on the right side of the cursor. I.e the way the mouse cursor is pointing.

In your example (and in the left margin in of a MS Word document) you will select the paragraph to the right of the cursor.

A similar example from MS Excel (and probably tables in general in MS Office) is the straight black arrow, pointing to the right, which indicates that the row (to the right of the cursor) will be selected. 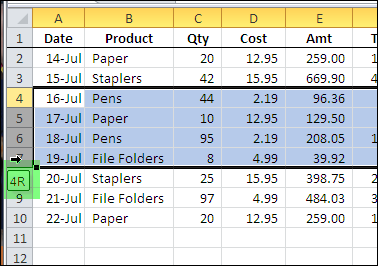 Consistency matters in UX, even when it is in things that most people will not be able to consciously notice.

I don't see any worthwhile advantage for this in any application. I've never heard a single person complain that in gmail the cursor isn't mirrored, and so I can't imagine that it is a problem for anyone.

Rather spend the time making other aspects of your app better than wasting it on small details that don't matter. I think Outlook could do with a bit of this approach.

I've noticed this too and believe Outlook does this to prevent the cursor from unnecessarily blocking the content of the mail message. Notice that this behavior is induced on the left hand margin of the mail message. Microsoft Word exhibits the exact same behavior, so I wouldn't be surprised if it originated there and was subsequently ported into Outlook. My pet theory is that this behavior is inherited from old or very old versions of Windows. The standard VGA resolution is 640x480. VGA would still have been around (though waning in popularity) when Windows 95 was introduced. Note that the standard Windows cursor size is 32x32. In VGA resolution, the cursor takes up 5% of the available horizontal real estate (though because the cursor doesn't completely fill its 32x32 allotment, it's less in practice). So my theory is that because the cursor covered significantly more of the available information on the screen, getting it out of the user's way was seen as more valuable than it would be today. I like this theory even though I have no facts to back it up.

More to the point, unless you have a very specific reason for switching the orientation of the pointer, don't do it. Now that displays are much more information dense, cursors don't interfere very much with the user's interactions. Unnecessary animations are distracting to users and the mirrored cursor will be meaningless to any user that hasn't read your product's user guide (which is to say everyone).

I do not think any user expects the cursor to go reverse in any situation ever. EchoEcho.com suggests that this cursor is available in IE(6+) but I don't see this working in IE9 or in any other browser or even on any other windows application outside Outlook (and on Outlook it is also used in a very weird way).

Information on above url suggests that the possible use of Mirrored Cursor is "North East Re-size" but I don't see this cursor ever used in that sense. Re-size cursors are pretty much standard and adopted across all platforms and browsers.

On a personal note, don't learn UX from the Microsoft. They might be big and trend-setters for some aspects but when it comes to UX, they are fairly average (rather poor) performers.

The reverse arrow means that the whole row that it is pointed at will be selected. Microsoft still uses this in their Office programs and it appears in many code-editors.

18
Why does the mouse cursor switch direction over line numbers in programming IDEs?

8
Easiest cursor move?
20
Who invented the blinking cursor
594
Why is the mouse cursor slightly tilted and not straight?
11
Who created the Mac Mickey pointer cursor?
2
Why is the hand symbol used for the hand-cursor?
27
When to use grab vs move cursor?
2
Magnifying glass cursor
1
when to use "wait" and when "busy" mouse cursor