But are there any case studies or quantitative data in this area?

Aside from curiosity, I'm facing one main issue: internationalizing for a Chinese audience. Going from a relatively clean, sparse layout (think Apple or Medium), are there any specific things I should change based on proven best practices?

I actually wrote a really long blog post about designing for international audiences where I heavily referenced the use case of How Macdonalds provides customized sites for each country depending upon the design principles in use there. To quote from my blog with regards to references to how design principles affect Chinese sites:

Understand Color symbolism in different cultures : One aspect of design that can have far reaching and sometimes unintentional effects on readers is color. Colors have different meanings in different cultures and care should be taken to ensure that the color combinations used while designing a website don’t affect local sensitivities.

Understanding color can be a tricky challenge and many color meanings can almost seem contradictory — particularly in the West, where color meanings are extremely broad. Also certain colors are strongly associated via culture to emotions and beliefs and even historical facts (e.g. Yellow in China is considered as the color of the emperor and hence considered as royalty).

Understand Country specific design patterns : Though there is an increasing trend towards minimalistic design patters in US, there seems to be no such movement in most Asian countries where design layouts still has very high information densities. Taking the example of McDonald’s China, there is an emphasis on communicating a large amount of content to users at a single instant with multiple points of focus. Part of the reason is because users in China are more accustomed to analyzing more information at a single glance and it’s easier to read a lot of content in Chinese. 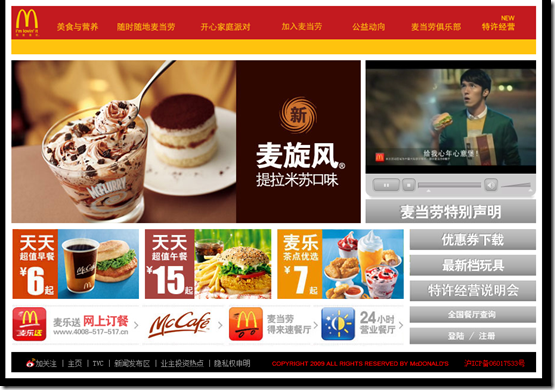 While choosing graphics for a site, care has to be taken about its meaning in the culture where the site is going to be used. While certain symbols might be accepted almost everywhere around the world, seemingly innocent and daily symbols might be a cause for specific spite in some countries. For example, the “thumbs-up” gesture is used in many countries as an affirmation of success or approval. As a matter of fact, Facebook based it’s like symbol based upon the thumbs up gesture’s general acceptance. However, in modern day Afghanistan, Iraq and parts of Greece, Italy and France this simple gesture can be considered to be very impolite. In fact it is often regarded as the equivalent of the “middle finger salute” used in the UK and USA.

Another example is the Swastika: most of us will associate it with the Nazi movement. But for Hindus, it is the symbol of good luck and well-being. The swastika is used in all Hindu yantras and religious designs.

Other questions you should check for responses for designing for International audiences are :

Should a multinational website background color be a conscious choice?

Best Practice for designing UI for a multilingual site?

That said, while the general impression seems to be that chinese sites are expected to be busy and contain a lot of information, there is also increasing information about how Chinese users are moving towards a simpler and minimilistic look as referenced by this article Global UX: 6 Website Design Trends Shaping the Chinese E-commerce Industry. To summarize the article :

However these changes seem to apply mostly to ecommerce sites and if you are looking for web design principles of how to design for general sites, here is a good slideshare presentation Chinese web design patterns: how and why they’re different which has a lot of useful inputs

Another article worth looking at is Chinese vs. Western Web Design for inputs on how chinese site design varies from western design in the general sense

You need to be careful designing for another market. There are a lot of traps along the way, which may be hard to find. When you're done with your Chinese internationalization, have a local Chinese UX consultant have a look at your work before launch. That way you can feel more safe that you are on the right track.

On general there are a few things to think about. Take colors for instance where there are some considerations to do for white and red, as Christian Arno explains:

However, there are also cultural considerations to bear in mind when it comes to color. In some cultures certain colors will have different meanings which should be borne in mind. For example, whilst in western cultures the color white is associated with weddings and cleanliness, in some Asian cultures it has strong connotations with death.

Similarly, red represents ‘danger’ or ‘passion’ in North America and Western Europe but it can mean ‘purity’ in India. Orange is often the color associated with the fall in the US, but in Northern Ireland, for example, it holds religious connotations.

But we can’t avoid red and white all together in web site design. Just be careful where we color elements of our site. White for background color shouldn’t be a problem, but white on a drawing of a female dress, might mean trouble in Asia.

Facebook uses a very familiar like button, which is great in the western world, but have another meaning in other parts of the world as Christian continues:

As with color, it’s important to consider the cultural connotations of images and text on your website and a straight replication between one country and another is not necessarily appropriate. For example, a thumbs-up gesture is a positive sign in most western cultures but it can be very offensive in parts of West Africa, South America and the Middle East.

Acronyms are also another factor, but not necessarily a connotation aspect:

Take the Tourism Federation of Wisconsin, for example – their acronym used to be WTF until they wisely changed it to TFW.

Using experts on the matter might be a very good investment.

Not the answer you're looking for? Browse other questions tagged culture or ask your own question.

213
Why do many sites leave half of each webpage empty?
25
Should a multinational website background color be a conscious choice?
6
Best Practice for designing UI for a multilingual site?
5
Beyond a one-size-fits-many-Westerners approach: Which mobile apps take localization seriously?

5
Reliable sources about UI/UX best practices in Japan?
5
Colours in cultures : where does the data come from?
6
Should we trust a user's web browser to tell us the language/culture they want?
0
Is currency symbol enough to figure out the culture