I'm wondering what the best way to provide a user the option for the french version would be. I feel like a universal toggle would seem broken since it would only translate certain things, but I feel it would also seem annoying to me to have to toggle to french on each specific page, plus the summaries will show up on many pages in smaller chunks.

What would be an intuitive way to present this functionality.

(obviously in a perfect world there would be translations for everything, but this is what we have to work with.)

layout accessibility internationalisation
Share
Improve this question
edited May 20, 2012 at 17:44

How about adding a little French flag (or some other signifier) next to the portions of the site that can be translated and when the user clicks on those the are presented with a popup of the translation. 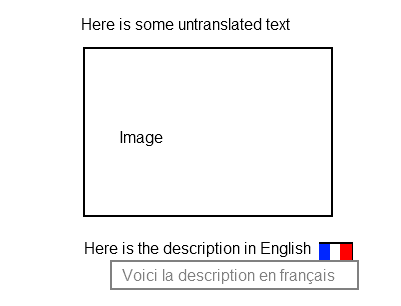 One way would be to determine the users language preference (via settings, GeoIP, browser-accept) and show the French texts by default to the people who have French as their preference.

Added to that I think a notice next to the text (top or bottom) saying that this text is translated into another language., a bit like ChrisF answered.

Along side with such a notice, you could also provide a text when there is no such translation yet, and offer users the ability to write a translation for the text. In this way you can build up more and more texts in French (or other languages). And maybe even ask users to translate the main user interface.

(One thing to think about is if you want to present an interface in which some parts are in French and some in English.)

Not the answer you're looking for? Browse other questions tagged layout accessibility internationalisation or ask your own question.

18
Should apps allow the use of non-Latin names?
6
Mixing languages on a blog : cute or worst idea ever?
3
Providing multi-language descriptons
6
Intuitive cross-cultural terms for full name and name-to-be-addressed-as
1
What to use as a textual link to a page showing a list of available languages?
10
How to represent a translated formula in an accessible and visually clear way?
1
What is a good way to deal with a very long column of buttons in a fluid web page?
2
Grouping language names