Why can't I set a real output volume on radios and TVs?

You all know the story. We're watching some TV-series in the evening, and when the commercial break comes the volume goes up 10 dB, or at least it feels that way some times. The same on commercial radio stations - at commercial breaks the volume is much higher. It doesn't even have to be a commercial - featured film also varies a lot in output volume, which could be annoying if the viewer tries to respect neighbours' sleep.

Of course I know why! The stations live on commercial income and need to make sure the ads are heard. But from a users perspective it's annoying, and possibly also has the opposite effect. "I'm not buying this since it annoys me".

Still, one wonders why radio manufacturers and TV manufaturers produces devices that have a fixed output. It would be technically fairly easy to produce devices where you could set true output volume in Decibel. That way, no matter what signal strength the stations used, my device would output the same volume. But I'v not seen such device yet - and I wonder why?

I don't think its a problem with your television but an issue with the fact that there is no normalized specifications for the sound on tv. To quote this article from Gizmodo

"We try to normalize all the different content as best as we can," says 'John', "but it becomes difficult to meet consumer expectations without adding audio artifacts that might also be distasteful to the user." The more engineers touch the content, the worse it can look and sound.

"This situation is often times magnified on dialog-centric shows (60 Minutes, etc.) where the audio track is mostly human. There isn't a large audio frequency range of the human voice—typically 300 Hz to 3400 Hz. The amplitude (or volume) range of that is also compressed so that what the user hears is very focused—not a lot of variation in pitch or volume."

"Coming out of that into a commercial that is primarily focused on the music track with human voice playing a secondary role as just a voice over can amplify this issue—especially when combined with the possibility that the the commercial was mixed to a higher dB level.

Another challenge which is called out is that Ad integration is done through online video and often for advertisements the video player for that 3rd party company(which created the ad is used for playback). To quote the same article :

"The other thing that makes this a challenge is the way a lot of ad integration's are done with online video. Often times a 3rd party company's video player is called in a run-time for ad playback. This is typically the ad network's video player. It sits on top of the content provider's player. We do everything we can to make sure those players adhere to the volume controls the user has set in our player." Unfortunately, that lack of a unified standard for content continues in the ad playback system—most of the time, all the engineers can do is talk to the ad companies and request they play nice.

"The actual creative that is playing back is made by all sorts of different companies. There is no true audio standard for volume and quality so you'll see a range of post-production and mixing levels come in from the advertisers." 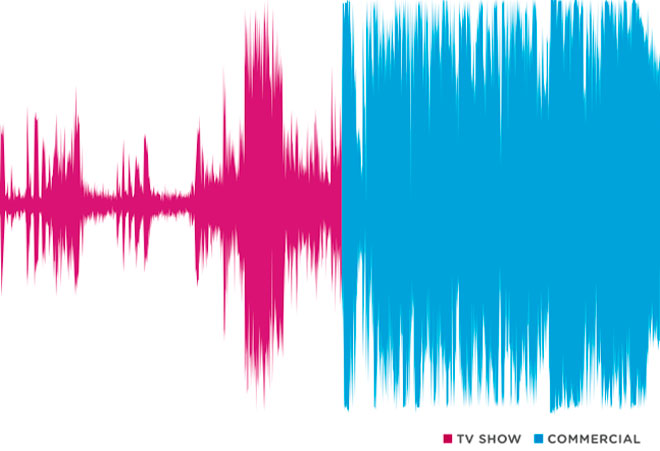 That said you could perhaps look at this little device to ensure sound is moderated at all times :) 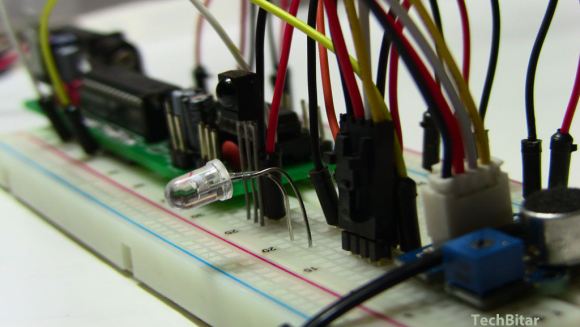 Alternatively if you Live in the US, hope is around the corner with the Calm act which was recently passed.

Sound is very dynamic. In your question you make the assumption that it would be easy to set the "same volume" for the entire viewing experience.

Not that I am an engineer on the subject, but sound has great range and dynamics. While you can set the volumne peak on your TV set, this does not mean that normal television programs use that peak range all the time. More likely, only some of the time will the sound reach the peak, for example in a crash, or explosion, or some lound event like that.

As @Pesikar mentioned in his comment, commercials are mixed so that they have the same peak, but instead of using the full range from silent to volume peak, ads tend to have the median heavily in the upper range of the volume spectrum - thus your perception of ads being "louder".

This could theoretically be countered by dynamically modifying the volume based on a median calculation in addition to the overall peak. But this is problematic. Should a single loud bang amplify the more silent sequences, so as to give an overall more "consistent" volume experience? Enforcing automatic "spreading" of sound to the full volume spectrum is equally difficult, as it distorts other sounds environments that should be loud on average, e.g. imagine a scene near a waterfall, and two actors talking. It would have to be loud in median calculation to give an appropriate impression of the scene.

To a more pragmetic solution to your problem, I have seen TV sets that have a "silence down for x seconds" controls. Like a button on the remote you can program to turn down the volume for your average ads break duration.

Like Pesikar points out in the comments, the audio is not really loud in the first place, but compressed differently.

That said, suppose one wanted to design a feature built into the TV that allows the viewer to limit the audio output to some specified value (as measured in dB(A) or something else across the frequency span used by the audio at that specific time). What would the challenges involved be? What would be the potential failure modes?

First, you can limit audio loudness basically in one of two ways. You can either average over a period of time and adjust the audio such that the average over that time period is at a certain value. Pick a short enough interval and this effectively limits the peaks; pick a long enough interval and it normalizes an entire movie while retaining most of the difference between valleys and peaks in the audio level. Or you can clip peaks to some predetermined loudness while doing nothing about anything else. How would either of those work out in practice?

Clipping peaks to a predetermined level is relatively easy, but it leads to distorted audio. Any time you clip anything, by definition you lose definition. So any sudden, loud, desired sounds would become distorted. Alternatively, to guard against this, producers would have to use a very low level of audio output for anything normal, forcing you to turn up the volume anyway as well as (in many cases) losing audio fidelity and still leading to a risk of clipping. This is clearly not a desirable approach.

Averaging and normalizing over a period of time would allow the TV to dynamically adjust the output volume to a predetermined level. For that, you have to pick a period of time to average and normalize over. Let's say at first you pick 50 ms, because it's a small, nice and fairly round number. So you prefetch 50 ms of audio, analyze it to determine the loudness level, and then adjust the output audio amplification before playing it back. For better and worse, 50 ms doesn't let you adjust to any longer trend, which means that this system is fairly easy to trick into using a volume other than what the viewer intended (just set the audio level to zero 1 out of 5 ms, and the peaks can rise 20% without the average being affected). If you take a longer time period, you can sort of protect against this, at the expense of a noticable audio delay (which admittedly can be corrected for by having the TV buffer video output before starting playback and basically showing a time-delayed version of the input, but that too has other problems, such as accurate timing which some people want). But then there is a scene that is supposed to be quiet: two characters whispering to each other, a nature scene, or whatever. That too will get averaged and normalized to the set value, increasing the audio output level. Suddenly, based on the audio, you can barely tell the difference between characters whispering to each other and yelling at each other, and with low audio levels, ambient sounds (as well as random noise) will get amplified to however loud you want conversations to be. Clearly not desirable! While this can be resolved by making the TV not increase but only decrease the audio level in the normalization process, doing so means it's not really outputting a more-or-less-fixed audio level anyway, so it fails your basic design criteria. Back to the drawing board. :)

So either way you choose to implement it, it basically fails in common scenarios. In one case it leads to poor audio quality, in the other it becomes difficult to tell how loud a sound in the movie is and increases the amount of audio noise.

How many would pay extra for that?

Not the answer you're looking for? Browse other questions tagged dark-patterns sound or ask your own question.

10
Why does every website seem to use max volume level for sound?
1
Why does Android use the 'Bell' icon (for notifications) as its primary sound option when using the volume rocker?
9
Volume control and Pause/Play toggles are inconsistent, why?