What should a toggle switch do when using a multi-select?

When an item in a list has one of two possible states, how should the toggle switch behave when items have been selected that have different states?

Neither action is dangerous, but it may act on items in a list of thousands. In which case finding the items later on could be problematic. It's about as dangerous as starring or unstarring an item in gmail. 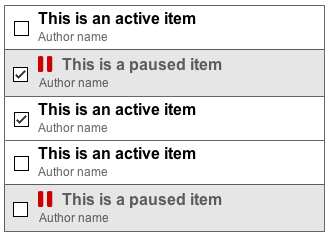 Some options that I am considering are:

Which option is better, and why? Are there other options that I haven't considered?

Some notes here. We can't consider an individual toggle switch for each item (like starred items in Gmail) as there is no place for it without cluttering the layout with many selection points. The example here is just a mockup for the question.

For users who didn't expect that behavior, have a visible "undo" button to revert the action.

presuming the toggle is between active and paused:

why not just have a declarative action instead of a toggle? e.g. "make all selected paused" - toggling seems a bad choice of paradigm for usability here and more a convenient choice for programmers - given the volume of list items, I would recommend building in reversibility/undo/ctrl-z as part of the process

Not the answer you're looking for? Browse other questions tagged buttons icons multi-selection toggle or ask your own question.

497
Should a toggle button show its current state or the state to which it will change?
0
What kind of button should I use for toggle all state?
8
How should a multi-state toggle slider with more than two states be implemented?
3
Toggle Switch with Delayed State Change
0
Avoid toggle switch on any page with save button?
3
Should I use multiple icon for two states of toggle button
1
Toggle switch vs other solution
0
Is a single or bi-positional indicator better for a binary state?