Are some of Windows 7's UI less intuitive than previous versions? [closed]

Ask Question
Asked 9 years, 11 months ago
Active 8 years, 9 months ago
Viewed 995 times
16
Closed. This question is opinion-based. It is not currently accepting answers.

One feature I can't understand is the minimize to desktop button. I can't imagine why it is more intuitive to put it as this little tiny transparent strip on the bottom right hand side instead of wherever the user wanted to have it like in XP.

Second feature - you can't put any quick launch things on the start bar. Like if you had a word doco u frequently refer to, you have to put a word shortcut and then the document. So it takes at minimum two clicks where before it took one.

Third feature - The file explorer is much harder to use cause it's got different columns for folders it deems has different content - videos, music, files etc. At least put in an easy way to say, change a folder to have columns you would use to view files. eg. If I wanted to see how big each mp3 was and when it was last modified, i couldn't just change to the file view, I would need add all the columns individually.

Are there features in windows 7 that you find was just better how it used to be?

intuition window-management windows-os
Share
Improve this question
edited May 1 '12 at 13:47

Two other features that are less intuitive in my opinion are:

While I agree that the "show desktop" button is extremely difficult to find, I don't agree that it has too small an area. The corners of the screen are considered the best locations for frequently-used buttons, since their area is only limited on two sides (the ones facing the inside of the screen), and on the two other sides they're infinite. You don't need to carefully position the mouse right on top of them, you can just move it quickly in the general direction, it will get "blocked" by the corners of the screen, and rest right over the button. That's why the Start button and the X button are where they are. The problem is that it doesn't work like that on an expanded desktop, since the second monitor may begin where the main monitor ends.

It's an ongoing discussion whether a UI can be considered "intuitive" at all, according to e.g. What objective qualities make a user interface intuitive?

However, one part of Win 7 (I don't know if this was already present in Vista) I find confusing is the "Move file" dialogue.

At first glance, it has only one button (apart from the red close button in the top right corner): The Cancel button (in my Danish screen dump example: "Annuller"). 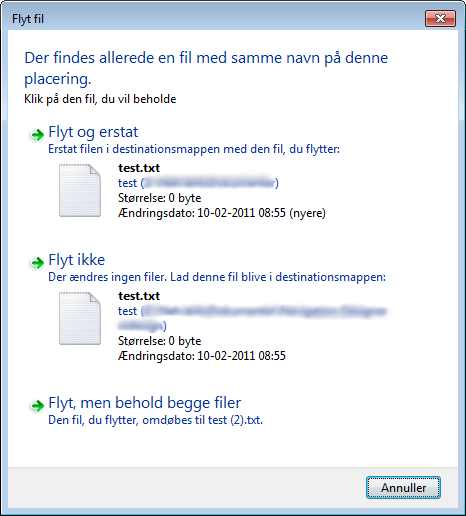 look more like info/guidance than actual buttons -- see the English version of the screen dump here:

The MS guys have tried to provide some hinting in the shape of the green arrows, the blue link-like text and a hover highlighting. Nonetheless, I think the design of this particular dialogue is less than optimal. 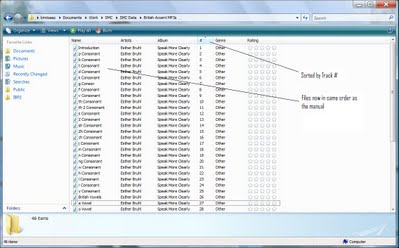 I greatly miss these "sort by" headers in Windows Explorer (e.g. sort by name, last modification or type) that are now displayed only in detailed mode; the only way to access the sort filters in the other modes is in a submenu of the right-click menu.

I still don't see what was the intended benefit of this design decision. More about this on SuperUser.

In addition, some of these things may seem counter-intuitive to you, having used the "old way" for several years, but for someone having never used Vista, XP, 95, etc. I'm sure that most of the changes are much better than the old way. Microsoft did a ton of usability testing with the interface changes proposed and made to Windows 7, and I'm sure as many new ideas got thrown out as what was actually changed. Their goal is to make the experience of using Windows easier for entry-level users, not advanced users.

The same thing happened when they introduced the "ribbon" into Office - experienced users hated it at first, but really, it actually is a much better interface once you rewire your brain to think about things the new way.

Trust me, five years from now, most of these things that you don't like now you will be wondering why it was ever done differently before.

The minimize desktop capability on Windows 7 was definitely a problem for me. I would be curious to know the decision making process around that one.

They implementation goes "over the top" in terms of subtlety. How are you even supposed to know it's a button that does something? The other issue that I've found not so pleasant is how it's click area is so small.

All that being said, I've come across users who had problems even being aware of the show desktop icon in Windows XP.

I find Explorer less intuitive. For example, I find that I have often the same highlight on both the tree and the file pane. So if I hit delete, which one goes away? Time to pay attention! Not really UI, but strange regression over XP: a newly created file (copied, downloaded, saved...) doesn't appear immediately. And I dislike the fact that when it finally appears, it is already sorted: somehow, it was convenient to get them all stacked at the end of the directory listing. Sometime, I miss the "Up a directory level" button... And I dislike the fact I cannot set column settings over a whole set of directories.

Hardest and most confusing thing in W7 (and Vista, maybe) for me are their settings dialogues. In XP there was a single window with tab, in Win7 there are these “helpful”, context-dependent links on the left, which are:

Unfortunately, I cannot post images yet, but you can take a look at them at this page (first four of them, about setting up network).

My problem isn't so much that some XP features are indeed more intuitive (and less cumbersomme) than Win7 (although that statement is by itself very true, nevertleless).

My problem is that lots of my (admittedly a bit exotic) hardware does not work any more with Win7 because there are no Win7 drivers for them. And I am getting a bit tired of having to junk half of my peripheral hardware every time a new operating system is released.

Examples: My USB to 4x RS232 box from Tripplite, my hires USB document scanner; my expensive Clairo soundcard (there are Win7 drivers but they make win7 crash), my PCI parallel interface card (I need this for certain engineering equipment that uses the D25 printer port for control) and a few more.

But Win7 is superb in ONE thing: The Windows Media Center ap. I love that and use it as my home theater center. For the rest, I do not see much improvement over XP with Win7.

So I have installed them both in a dual-boot configuration. This also allowed me to compare the two extensively, also speed-wise. And guess what - Win7 boots a bit faster than XP (but not by much) but is considerably slower in execution for lots of my user software! Maybe that would not be the case if I upgraded my other Windows software as well (Office) but I am not going to shell out another $300 for Office just to get some speed improvement under Win7 with a lot of other (new) Office features I will never need.

My conclusion: Microsoft business model of trying to make money by introducing new products that are (deliberately) poorly compatible with legacy stuff while the only real advantage seems to be a more spiffy user interface, is obsolete. Or in plain English: Microsoft is in danger.

In that respect, Google seems to me the real innovator on the block and will be the software giant of the future. That company really impresses me (and no, DEFINITELY not Apple. Making phones thinner every year while relying on proprietary user platforms for market share is NOT a good business model either!)

One great benefit of having the "Reveal Desktop" control at the bottom right of the screen is speed of acquisition. You don't need any eye-hand coordination to rapidly get your pointer to bottom-right. An advantage of this behavior in our evermore cubicled world is if you are working on something confidential and somebody strolls up to your desk, you don't go scrambling to minimize or hide windows you're working on - just drag your pointer to bottom right. Bingo - desktop.

Features that I like - shake a window and hide all others. Helps clear my desktop and my mind from distractions.

See, all of the things I find annoying about Windows 7 are things that I'm guessing no one here even knows about - like the fact that I can't it F6 anymore in Explorer to get to the address bar. Of course, that got taken away because the address bar is now MUCH more friendly for you "mousey" people :)

Not the answer you're looking for? Browse other questions tagged intuition window-management windows-os or ask your own question.

36
What objective qualities make a user interface intuitive?
9
The missing “Folder Up” button in Windows Explorer in Vista and Win7

19
What is it about our mental models that app-centric seems more intuitive than content-centric?
5
Is it good UX that in Windows 7 & 8 the “windows” of the same application are automatically grouped into one button?
11
Are circular menu / button interfaces intuitive?
5
How do I indicate that fields are mandatory in Windows Desktop UI?
1
What are some UI patterns where an option in a multi-select acts like a radio button choice and clears other selections?