What is the most appropriate way to enable users integrate religious calendars and prayer times (Islamic Hijrah or Thai Solar for example) with the Gregorian calendars that might all can be shared across users in other locales?

I was thinking of a Google Calendar approach of providing calendar types as 'layers' in a drop list enabled by checkbox and then using colors to show which is which.

But is there a way to indicate to global users that a type of calendar is religious or cultural? The context is for business applications running in multilingual environment. Perhaps "non-working times" or "non-working days" for prayer or other events in the most sensible. A bit generic though...

I would recommend going with the Google calender approach as it gives the user the flexibility to add additional calenders as needed. However the design change I would make is to ensure that you explicitly call out the holiday or religious occasion of which country it is or which religion so that you dont require users to go and compare the calender overlay color with the legend to determine which country\religion it belongs to. Take the example below where Google calender tells me 26th January is the republic day, but I cant be sure which country it refers to until I check the legend.

I also would like to call out the way Google has seperated the calender task schedule with the generic holiday announcement by keeping the holiday notification at the top. 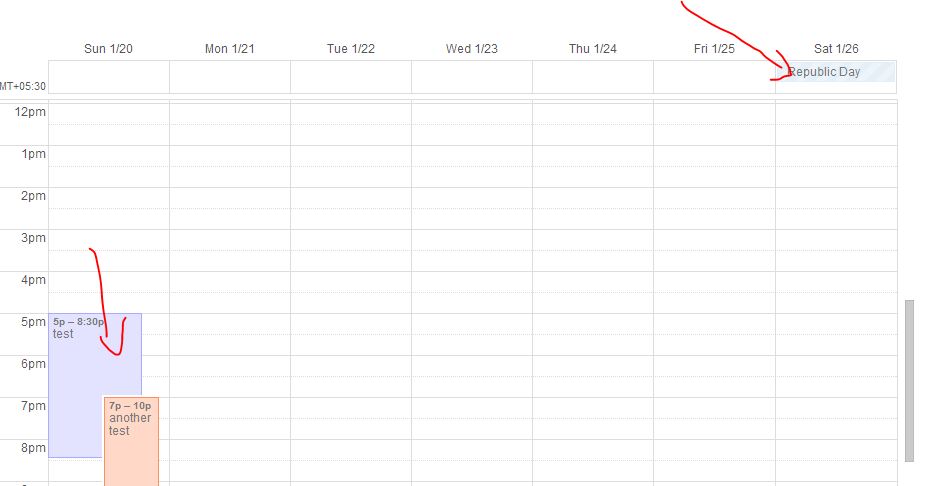 With regards to prayer times, since they can vary across regions, I would recommend the overlay approach to show the different times at which prayer might happen.

With regards to specifying if a holiday is religious or cultural, I recommend just specifying the name the holiday and keeping it at that. Some holidays are cultural and religious while some holidays are religious but can also be cultural in some parts of the country. Hence instead of trying to come up with a design to determine what is what, keep it simple and just communicate the information.

Lastly, show only the user calender as a default view and dont overlay the religious calender by default and let users enable it as needed.

I'm going to be blunt, and I apologize for that. No offense intended.

Never ever blend business with religion. It is one of the first rules you learn in business school, at least the real life business school. The second is never blend politics with business. Those are the two things you shouldn't mention to your customers or your suppliers. Never chit chat about, so please leave religion and politics out of the equation.

The reason is that religion and politics are based on beliefs and feelings rather than facts. You could end up in a fierce discussion going nowhere since we're talking beliefs here. There is no wrong and right, no truth and often no facts.

Keep business life calendar and religious life calendar separated, and never intervening. If that's not possible - you're gonna have to make a choice - is life going to be controlled by religion or by business? Beliefs or food on the table?

Not the answer you're looking for? Browse other questions tagged calendar localization globalization or ask your own question.

21
Why do alarm clocks not all come with 5/7 day alarms for the working week?
6
Best Practice for designing UI for a multilingual site?
5
What is the best UI for an out of office application?
4
What is the best practice for enter key form submission on sites that use IMEs (i.e. Japanese)
17
Best international symbol for date range?
2
How to make a UI for calendar with vacancy?
1
Distributing iCal links as best practice for the end user
1
Best Practice for indicating part of a week textually (specifically contiguous days)