Is there a style guide for NFC functionality on Android (or generally)?

I've just added NFC functionality to my Android app, and I need to expose it to the user. I don't have a separate UX specialist or tech writer to hand this off to, so I want to make sure I don't write it in programmer-speak. I'm looking for a list of standard conventions to follow in user-visible texts regarding NFC (in Android), if such a thing exists. It should answer detail questions like:

I'm not looking for general UX advice, as I know in general how the user interacts with the feature, and what the workflow is; I'm interested in getting these details right and consistent with other apps.

Edit: I just found out that software developers are allowed to use the official NFC logo. It's free to use but a license agreement has to be accepted. See this page for more info.

That being said, the following still applies.

This is how the NFC functionaility is shown in the quick settings of my android phone (running cyanogenmod 10.1). Be aware that I don't know whether this is part of the official Android Open Source Platform (AOSP) drawables, or if it's an addition made by cyanogenmod team.

The usage of this icon is consistent across the whole OS though, for instance the "profiles" menu uses the same icon.

The tile is blue because NFC is currently activated (the tile itself acts like a toggle). 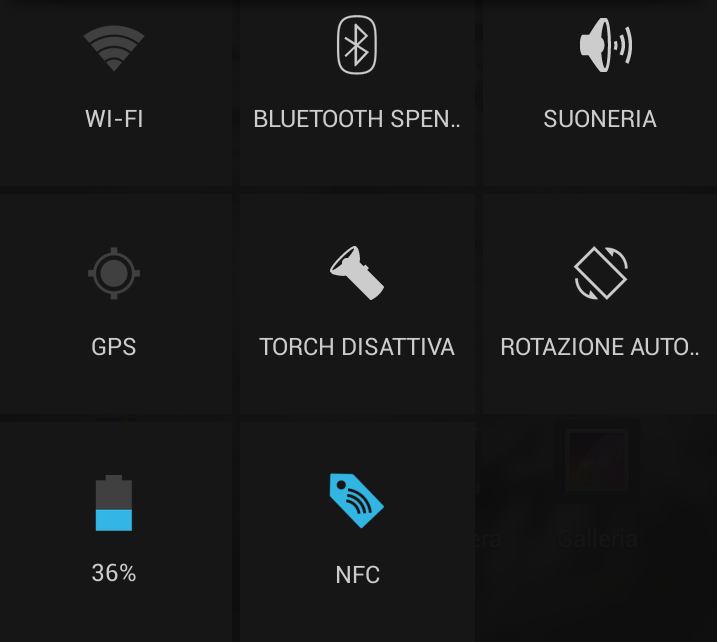 Not the answer you're looking for? Browse other questions tagged android conventions or ask your own question.

11
ICS style guide - Is there a standard icon to indicate drag and drop in a list view?
1
Best Interface for a form in android
2
How do I guide users to use the Windows program necessary for my Android app?
4
Is it advisable to use own color scheme for Android app
2
Designing for Android (with zero Android experience and no Android device)
1
Would users understand splitting an Android app's functionality by permission?
4
Android: Guide user to pull to refresh
5
Is there a standard for capitalization of Android app menuitems?
5
Best way to integrate “Help Guide” into a Android Application