How to create a call to action for small kids?

Why do you need to "start" the game? Can't it start "by itself" whe it loads? Like Dora Explorers game "Say it in two ways"? This game learns the kid English and Spanish at the same time, spelling the word in two languages and speaking them. I've not tried it on my own kids, but I'm sure they'd get around it pretty fast.

Important with the screenshot below is the call-to-action button to the left. They seem interesting and "I want to know more" even if I don't understand them instantly. Exploring is a big part of a kids learning. 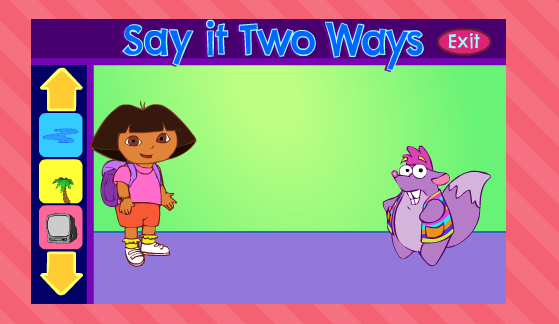 The game is situated on Nick Jr games for 2-3 years old. Try all 35 of them and see if you get any idea from there.

National Swedeish Television (SVT) also have a kids web site which aims strictly at kids. I can't navigate the **** thing, but my kids could when they we're 2-3 of age. And if you dont know Swedish - see if you can understand a different language and what to do where. I belive some ideas can come from SVT childrens site Bolibompa!

I think I'd really try to make it look like something they'd press in real life, far more than I would a button for adults. Perhaps also add an image of a hand/finger pointing at it, or a voice that prompts them.

Either way I think lots of testing is in order once you come up with some good options :)

the plan was to start the game intially but there was some feedback that there might be some need for a small tutorial.Hence the need for a button to say play once they are done with the tutorial.

I'm not sure why you would need a tutorial for a game designed for a 2-3 year old. If anything, the game should teach the game mechanics while they are playing the game.

If you're talking about just a simple way for the child to advance to the next level, Ben Durnell's suggestion of a "high five" with a clap sound effect sounds pretty interesting.

I'm not sure what type of tasks your game will ask, but if the child needs to drag an object next to the letter it starts with for example, I would have an animated hand gesturing to "tap" on an object and "drag" it to the corresponding letter (perhaps in a ghost effect or arrows pointing to a silhouette of the object).

The idea is to show how to play the game while still playing the game.

But I would test this as much as possible even if you only have 2-3 levels built.

1
clearest place for 'call to action' button?
0
Call to action - Search box or button?
4
Using faces in call to action buttons, good or bad?
0
How does one know which call to action to optimise for?
0
What is Github's project pages call to action?
0
What is a Call To Action?
9
How do "We call you back!" buttons on websites make sense?
10
How to make effective call to action for blind people?
3
Fake call-to-action buttons for research
4
UX Party Game Design - Should an action that is not available for all players disabled or simply hidden?