Which button should get the focus at delete dialogs?

I thought that most destructive actions should be avoided from default actions. But when a delete dialog comes, I see that most Windows applications (even the OS), by default, set the focus at "Yes"/"Delete" button. On Mac OS X, instead, I see the following at their design guidelines:

• Performs a potentially harmful action that users can’t cancel (for example, the Delete button in Mail)" ...

Which one is the best approach?

I think the answer to whether the destructive "delete" should be the default action or not highly depends on the context in which the dialog occurs. If the dialog was the result of an action that expresses a clear destructive intent, like for example clicking "empty trash", the user probably knows what the consequences are, so it makes most sense to have the affirmative "yes, I really want to empty the trash" confirmation be the default action (enter confirms, space or escape cancels): 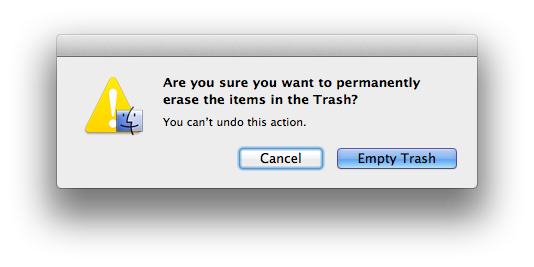 In such cases it could potentially be very annoying if there is no easy way to confirm the action that the user just performed ("yes, of course I want to empty the trash, I just clicked that, didn't I?!").

If, on the other hand, the dialog occurs to warn the user of a potentially destructive side effect of something they did, it makes more sense to err on the side of caution. A good example of this is the dialog that occurs when you close an unsaved document. In that case it is unclear if the user intended to abandon the changes, so the destructive action is not the default: 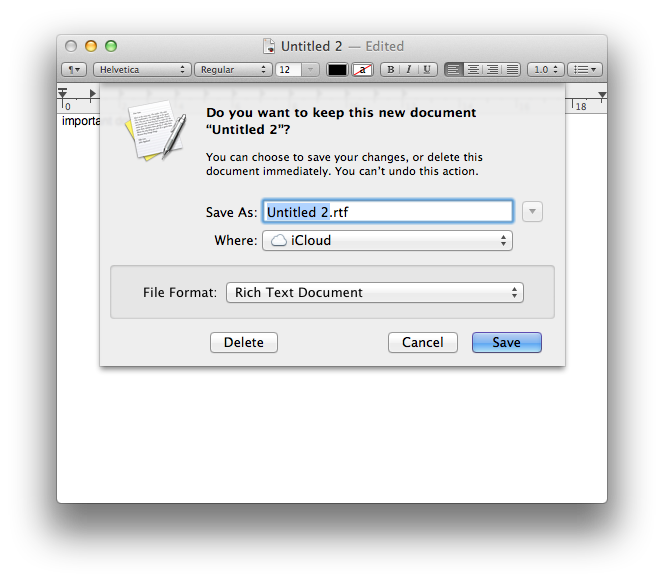 If the application is an Enterprise application, then it would mean that person would be using it on daily basis, and would know what he/she is doing. On next 'Enter' key press, they would like to action to be confirmed. However, if you are too concerned about data being deleted accidently, then let the deleted content go to a 'Trash' box in your application from where it could be recovered again. But if a user is expected to use the application to make a living on daily basis then focus should always be on 'Yes'

I wouldn't set either as default or focused. Instead, I would make the text focusable if necessary, so the user must choose an action (either using mouse, or by pressing on tab and space/enter or by pressing on excelerator key (e.g. 'Y' or 'N').

I would set the "No" button as the "cancel" button (responsive to ESC key).

Not the answer you're looking for? Browse other questions tagged forms windows-os mac-os-x dialog focus or ask your own question.

17
Where do you put the delete button if you have delete, cancel and submit?
3
List Selection mechanisms - OK to mix?
1
Best way to combine object selection and object editing in a dialog
21
What happened to "What's this?" help?
3
Should a form's style be left to the browser?
2
How to avoid that "Path to Completion" results in "Previous" becoming the next logical action?
3
Best way to remind a user to do a certain action
2
What should Cancel button do with edits made across multiple dialogs?
2
Action button placement different for modals than base screens