Is there an alternative to the standard comment stream below blog posts?

We have seen it a million times, the standard comment stream below the blog post / article. But there are alternative options out there. I'm thinking soundcloud https://soundcloud.com/quantic/out-from-the-cellar-5 as a starting point where comments are tagged along the songs timeline.

If I have a long blog post or news article with many different points of interest / discussion it would be useful to a user and author to be able to start multiple comment streams around one piece of content in a more organised way other than a list of what could be unrelated posts chronologically or most replied. I was wondering if using something similar to soundclouds timeline based commenting system but for copy based posts is a sensible idea.

I was wondering if using something similar to soundclouds timeline based commenting system but for copy based posts is a sensible idea.

I think the point of having those in soundcloud is justified by the idea that it is really hard to refer to a certain point of time in the track just by the time in seconds. The system visualizes the comments' context.

A topic-based visualisation could be achieved by using a more non-linear approach. For instance, thesauri have used such methods, but I doubt this is very usable for more text. For example, see below search result for "arctic" from http://www.visualthesaurus.com/ 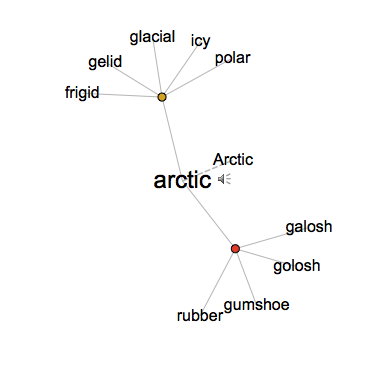 This is just an example, but note that most systems that visualize non-linear relationships tend to get visually complex (dimensions, weighting, connections, color), and are thus less suitable for reading longer text like comments and articles.

Not the answer you're looking for? Browse other questions tagged comments social-interfaces user-generated-content or ask your own question.

38
Should you place the “add a comment” form above or below the list of comments?
7
What is the most effective UI/UX paradigm for comment moderation in a CMS?
4
Comment Box above or below ?
4
do I need to show the post inline after a person posts?
4
What is the goal of Soundcloud's comment feature from UX point of view?
2
Is the comment area of a news story a distraction to the user?
2
What is the ideal maximum of the length of a comment or reply?
1
AJAX loading vs. “hardcoded” comments - is there any advantage of one above the other?
0
Comment section for an infinite scrolling blog page
0
What are the pros and cons of referring to a user's “response” rather than a user's “comment”?